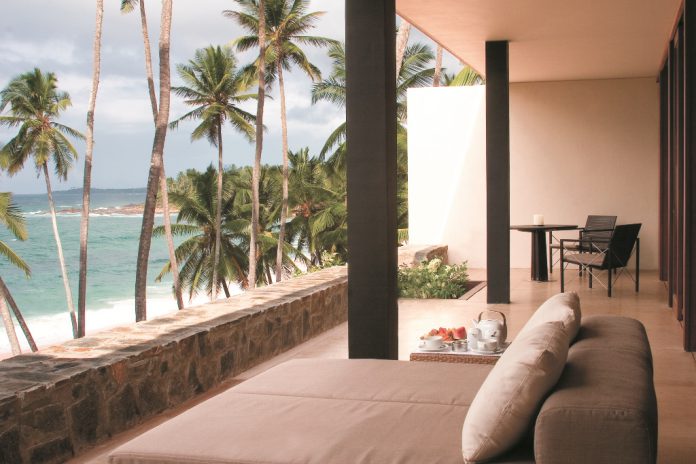 JUST a four and a half hour flight from Dubai and with the kind of unspoilt beaches, stunning scenery and tantalizing cuisine most travellers dream of, the phrase ‘hidden gem’ might have been invented for Sri Lanka.

There are very few places left in the world that still offer the kind of unblemished natural beauty and the opportunity for true adventure that Sri Lanka does but if you want to experience it in its purest form you better be quick because the times they are a changing!

The civil war that ripped the country apart for more than 25 years only ended in 2009 meaning tourism, in the modern sense of the word, is still very new, and while there are a few fairly built up resort areas, it’s still possible to find vast swathes of undeveloped coastline to explore and enjoy in peace. But visitor numbers are increasing at a rate of knots as this tropical island paradise, situated off the southern tip of India, starts to spread its wings.

From the ancient sights of the Cultural Triangle to the pristine beaches and thriving National Parks, Sri Lanka has enough variety to keep visitors coming back and making new discoveries year after year. We knew we were never going to be able to cover the whole country in this first trip so we got our teeth into a few key areas before agreeing a unanimous mandate to return at the earliest opportunity.

The bustling capital city Colombo is most people’s first port of call in Sri Lanka, home as it is to the country’s main Bandaranaike International Airport.  Many visitors overlook the former ‘garden city of the East’, viewing it merely as a stop off point on their way to the delights of the beach resorts or the inland Cultural Triangle, but Colombo has a lot to offer. The Fort area is currently undergoing a huge restoration of its stunning colonial architecture while legacies of Dutch, Portuguese and British occupation are visible at every turn. Galle Face Green – Colombo’s ‘front porch’ – is a large grassed area on the sea front, popular for catching the sunset or picking up some delightful street food from one of the many vendors there. It rained during our visit but the views were still stunning. Exploring this cosmopolitan city, with its burgeoning array of stylish eateries, galleries and museums is a must during any visit to Sri Lanka.

Sea Plane – The only way to travel

Our next stop was the stunning Amanwella Resort in the southern coastal region of Tangalle and with time of the essence we opted to fly there rather than waste half a day with a four and a half hour drive.  It proved to be the best decision we could have made.

Cinnamon Air (aptly named after the country’s leading export) is a small domestic airline offering an ‘air taxi’ service to Sri Lanka’s main tourist hot spots as an alternative to the still fairly rustic road network that can make travel by car or bus an arduous undertaking.  From the moment we were picked up at Bandaranaike airport in the Cinnamon Air minibus and transported to their bespoke terminal the service was first class. We travelled in a tiny eight-seater sea plane and what a thrill it was. If you want to get the best view of this stunning country, with its ever-changing landscape, this is the way to do it. It was truly breathtaking to see the lakes, mountains, National Parks and winding coastline from such a privileged vantage point and touching down on water at Mawella Lagoon in Dikwella was one of the highlights of our trip. 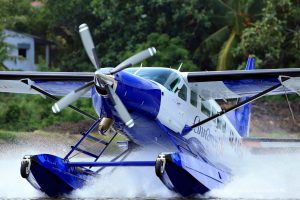 If you’re looking for luxury in one of the most beautiful beach spots imaginable, this is the place for you. Situated on a mature coconut grove, Amanwella is a super-cool ‘boutique’ style resort with only 27 suites, linked by a series of pathways, each with its own private plunge pool and stunning views of the Indian Ocean.  Like many Aman resorts, Amanwella succeeds in creating a real zen-like vibe of true relaxation and even when occupancy is high, there’s a real feeling of privacy about the place. General Manager Henry Scott, with his adorable black Labrador ‘Nero’ (the unofficial hotel mascot), perpetuates this atmosphere – seemingly always on hand and exceedingly helpful when you need him, yet never smothering with his presence.

The suites, mainly built sympathetically into the hillside, are huge, with all the mod-cons you would expect from a 5-star beachfront retreat, while if the private plunge pool isn’t enough to meet your swimming needs, the main restaurant and reception area features a magnificent 47 metre infinity pool.

The real star of show is the Robinson Crusoe-esque beach with its multitude of palm trees hanging lazily in the sun and creating plentiful natural shade in which to relax while watching the ever-roaring tide.

The food quality at the resort is of an extremely high standard, with both the main and beach restaurants serving a tasty blend of international and local Sri Lankan dishes.

We were treated to a cooking class on the beach during our stay and were fascinated to learn about local ingredients and preparation techniques that fo in to making a delicious authentic Sri Lankan meal. The hotel offers a whole range of activities and trips including whale watching and nature tours but in order to keep the SFME flag flying, we opted for a high-octane surfing lesson at a nearby beach. Our instructor, one of the Amanwella lifeguards, made it look so easy. He told us that Chris Martin of the band Coldplay and his then-wife, movie star Gwyneth Paltrow, had once stayed at Amanwella and that Martin had taken to surfing like the proverbial ‘duck to water’. This only served to make us feel even worse as we were falling face first into the water for the 15th time in a row. Great fun though.

Our final destination was Jetwing Yala, which is located about a 2 hour drive further along the coast from Tangalle.  Yala is famous for its National Park where hordes of visitors come to partake in daily safaris and this Jetwing eco-property is in a perfect location – close to the entrance of the park, yet in a tranquil spot right on the edge of the Indian Ocean.

This is a truly unique property. It’s common to see all manner of wildlife wandering carefree around the grounds and while we were there we saw monkeys, buffalo and a family of wild boar. But the highlight was definitely a cocky young elk, who wandered into the pool bar, bold as brass to help himself to a banana! You can stay in a superior or deluxe room in the main hotel building with views of the ocean and the surrounding vegetation but to get the true Jetwing Yala experience you should opt, as we did, for a ‘Tented Villa’.  This is the ultimate in rustic luxury. Set apart from the rest of the resort, the Tented Villas provide a true ‘glamping’ experience in the wilderness with king size bed, luxury bathroom, and all the usual modern amenities housed in a large marquee style tent.

During our stay we took in an early morning safari in Yala National Park where we spotted peacocks, buffalo, monkeys, a black bear and even the holy grail of Yala safaris – a leopard (albeit 100m away in a tree!). After bouncing around in the back of a 4 x 4 for half a day we were eternally grateful to the skilled therapists in the Jetwing Yala spa for their rejuvenating massage skills!

Like all the best shows, Sri Lanka left us wanting more and before we’d even touched back down in Dubai we were already planning our next adventure in this wonderful island paradise.

Pack your clubs and head to Mauritius this summer

Indigo – The Uber of car rental