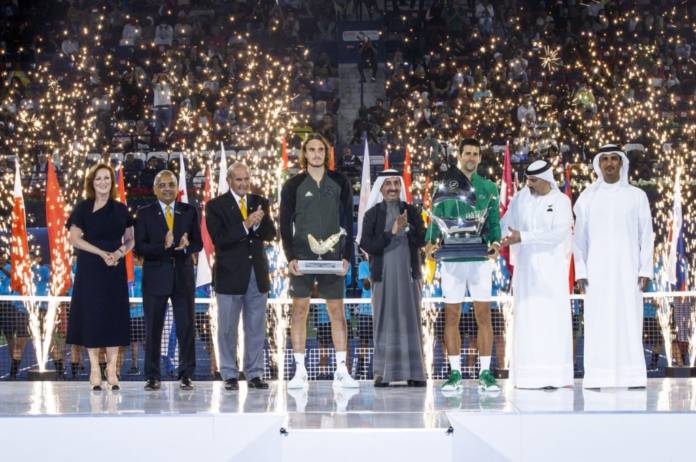 Dubai Duty Free, the owners and organisers of the Dubai Duty Free Tennis Championships (DDFTC), have announced the showpiece event will return March 7-20, 2021.

With the Australian Open forced to change its dates due to the COVID-19 pandemic, Dubai’s annual two-week tennis extravaganza will be hosted slightly later than usual this year.

Long one of the UAE’s top sporting events, the tournament will now begin with the WTA 1000 competition which will take place 7th to 13th March, featuring a fantastic field of 56 of the world’s best players. The thrilling WTA event will then be followed by the ATP 500 tournament, taking place from 14th to 20th March and hosting a galaxy of the game’s stars. And as an added bonus the ATP draw has been increased this year to 48 players, giving fans even greater opportunities to see their favourites in action. Despite the pandemic, which has impacted so many sporting and other events around the world, the Dubai Duty Free Tennis Championships 2021 will be able to welcome some fans to see their favourite stars in action. However, in order to comply with Covid-19 guidelines and to ensure the well-being of players, officials and fans of the tournament the stadium will have limited capacity in line with Covid-19 rules and regulations.

Commenting on the staging of the 2021 tournament, Colm McLoughlin, Executive Vice Chairman & CEO of Dubai Duty Free, said: “We are delighted to once again stage one of the key sporting events on the Dubai calendar, particularly as we mark the 21st running of the WTA week and the 29th year of the ATP tournament, both of which have garnered numerous awards over the years. “In that time, nearly every top player has at some stage in their career competed for one of the most sought-after trophies in the sport, and we look forward to welcoming many of the current stars for what is certain to be another two weeks of fierce competition.”

The organisers have formed a Dubai Duty Free Tennis Championships Tournament Committee, headed by Ramesh Cidambi, Chief Operations Officer of Dubai Duty Free. The committee has worked closely with the Dubai Sports Council, the Supreme Committee of Crisis and Disaster Management of the UAE and the Dubai Health Authority in order to obtain approvals to host the event in line with the highest possible Covid-19 safety measures.

“We thank all of the Government bodies of the UAE for their ongoing support of this tournament,” said Cidambi. “A great deal is going on behind the scenes in order for us to stage a tournament that ensures the safety and wellbeing of the players, the officials, the support teams and the fans. We are following the guidelines of the UAE authorities, as well as the WTA and ATP, to be fully prepared for another world-class event in Dubai.”

Commenting on the restrictions in place in terms of stadium capacity, Tournament Director, Salah Tahlak, said: “We are looking forward to running another successful Dubai Duty Free Tennis Championships, and while we have previously had many matches played in front of a capacity crowd, our spectator numbers this year will be restricted in line with Covid-19 rules and regulations.”

“We will shortly announce information regarding this and it is worth remembering that the tennis action will be shown live, from first ball to last, on Dubai Sports Channel and will be seen around the world.”

Last year, Simona Halep defeated Elena Rybakina to win her second Dubai Duty Free Tennis Championships title and her first since 2015 in a closely-fought final, and Novak Djokovic won his fifth Dubai crown and his first since 2013 by overcoming Stefanos Tsitsipas, who was competing in his second successive Dubai final. The Dubai Duty Free Tennis Championships is owned and organised by Dubai Duty Free and held under the patronage of H. H. Sheikh Mohammed bin Rashid Al Maktoum, Vice-President and Prime Minister of the UAE and Ruler of Dubai.

World’s largest fountain to launch at The Pointe, Dubai

La Fabrique Sports Bar – A sports bar with a twist