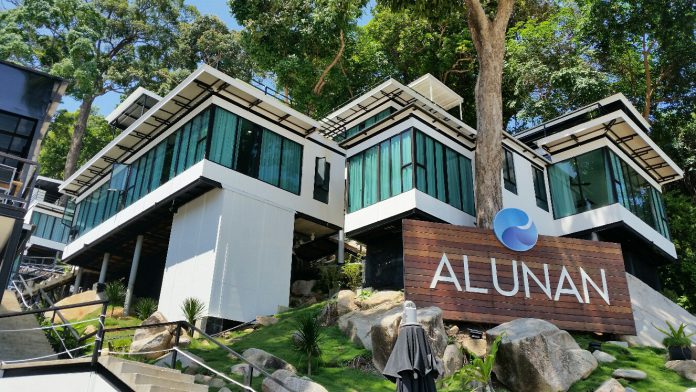 Part of me doesn’t want to write this review. I have a secret and it’s a secret so good that I don’t really want to let the cat out of the bag because once everyone else knows about it, it’s unblemished beauty may become tarnished somehow. But let it out I must because you deserve to know…

The phrase ‘hidden gem’ is bandied about all too readily in travel features but the enchanting Perhentian Islands represent one of the few remaining true tropical paradises that are still largely undiscovered by the mass tourist market.

I stayed on the smaller Kecil and from the moment I stepped onto the idyllic Petani Beach after an exhilarating 45-minute speedboat journey from Kuala Besut on the mainland, which is itself reachable by an hour long internal flight from Kuala Lumpur, I could feel my stress levels diminishing, such is the laid back atmosphere of the place. 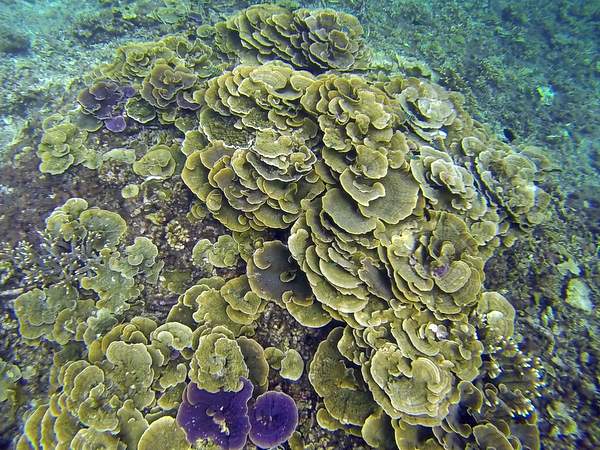 Plentiful coral reefs off both islands make for excellent snorkeling and diving while kayaking, and hiking are other highly recommended activities while visiting the islands.

There are no high-rise hotels on the Perhentians, and no roads – with water taxi or good old fashioned walking the only forms of transport available to get you from one spot to another. Pockets of ‘nightlife’ such as fire juggling shows and a small selection of bars playing live music can be found on Kecil’s main ‘Long Beach’ but it’s still not what you’d call ‘commercialized’. I heard rumours of several large resort chains having bought up large swathes of land so the vibe may change considerably in the next five to ten years, making a visit in the near future a must in order to experience its current isolated beauty.

Most of the accommodation is in the form of beach huts and bungalows of varying quality and very easy on the wallet. There are a couple of low-rise, ‘boutique’ style resorts for those, like me, who want to experience island life but with a few little ‘luxuries’ such as aircon, hot running water, wifi etc.

Alunan Resort is the new kid on the block in this bracket and boy is it making a splash. 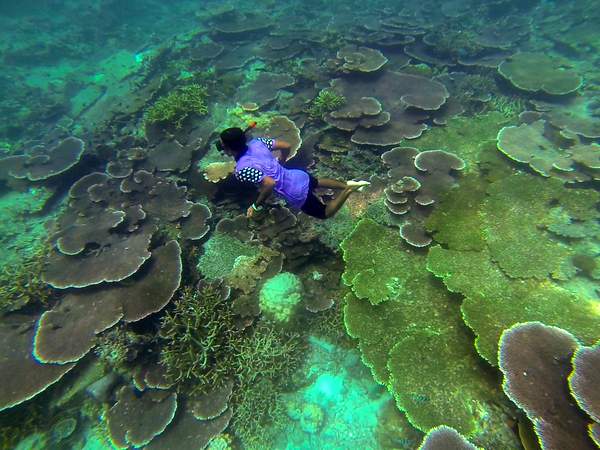 The rooms are all modern, well-equipped stand-alone duplex suites – 18 of them in total – built into the hillside and each featuring floor to ceiling windows and a private roof terrace, complete with the obligatory hammock, so that every guest can enjoy the stunning sea views.

Opened in March 2015, Alunan is an eco-resort in the most natural sense in that it is not attempting to jump on the ‘eco bandwagon’ in a contrived attempt to attract more visitors, it is merely a reflection of the personalities of co-owners Sany and Chu San. These two, young, forward-thinking entrepreneurs are two the nicest people that you could hope to meet and the sympathetic way they have put their resort and its team together, reflects both their love of nature, and people.

They were determined not to uproot any trees unnecessarily in building the resort, but to instead work with the natural topography, hence the unusual meandering layout in which the units are embed into the hillside – with the ingenious idea of including roof terraces coming about when they realized that the layout meant that not every unit would be able to have a great view. A real triumph of problem solving by design. 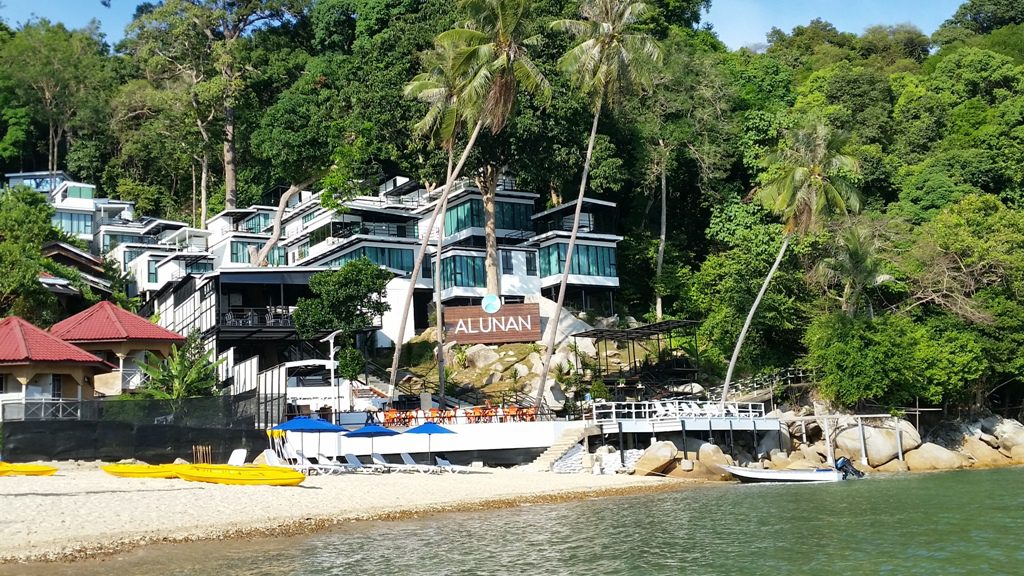 There is even a mango tree growing out of the wonderful sun deck next to the bar where a well-earned sundowner can be enjoyed after a hard day’s snorkeling or kayaking. Most developers would rip it out but at Alunan, they built the deck around it. When I asked Sany the reason for this, his reply was: “One day when we were building the resort the monsoon rains came and they were so bad that nobody could leave or come on to the island for days. Food supplies were running low, and this mango tree fed all the workers for three days. That’s why we’d never pull them down, they’re here to help us.”

The ‘workers’ that Sany refers to are, again, a genuinely lovely bunch of people. I know this because I’ve met them. After finishing building the resort, Sany and Chu San wanted them to remain part of it so they gave them all jobs as waiting staff, receptionists, groundsmen etc. They have learned their skills on the job and any gaps in their knowledge of the service industry are instantly forgiven by the warmth and welcoming way they interact with the guests, leaving a lasting impression on anyone who visits which makes them want to return at the earliest opportunity.

The pristine Patani Beach is a birthing ground for turtles and if you visit at the right time of the year, as I did, you might catch a sight of these magnificent creatures coming onto the sand in the early hours to lay their eggs. Arrangements can be made for the staff to wake you in the middle of the night if you want to witness this remarkable occasion.

There is fantastic snorkeling in the bay right outside the resort – the seabed is a little rocky so booties are provided to guests to protect their feet – while kayaks are also provided, which I took full advantage of to take a relaxing 30-minute paddle across to the big island for a spot of lunch! There are signs of erosion of the reefs in the bay so the resort staff are currently operating a conservation project to grow new coral, which guests can take part in.

The food is another real highlight at Alunan. Guests can choose from the al a carte menu or a nightly seafood BBQ featuring freshly caught fish of numerous varieties – all delicious! After dinner the deck offers a great vantage point from which to watch the baby sharks come in to feed with the torches provided by the resort.

Guests can also book organized snorkeling trips to various spots around the islands and I was lucky enough to join a highly enjoyable recce mission to try out some new dive sites where we saw amazing table corals, sting rays, trigger fish, baby sharks, and two giant turtles before replenishing ourselves with fresh fruit and homemade pancakes provided by the resort.

There are two meanings of the word ‘Alunan’ in Malaysian. The first is ‘small wave’ and with the resort’s unique undulating layout this fits the bill perfectly. But Sany told me that there’s another meaning, which is ‘rhythmic melody’ and there can be no doubting that Alunan sings its own unforgettable tune, one that we’re all left humming long after we’ve departed these captivating islands.