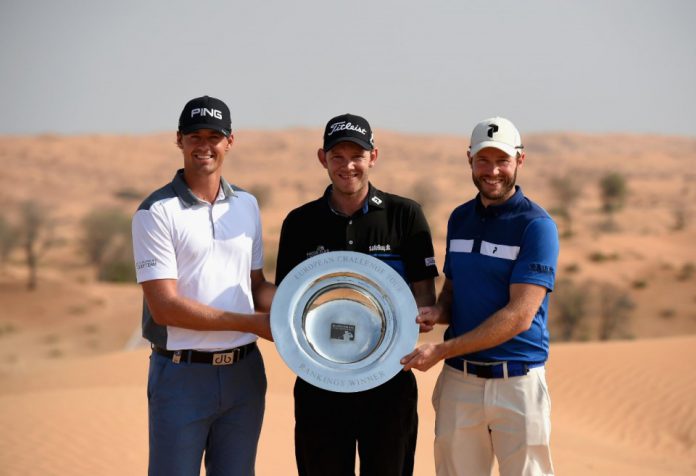 Joachim B. Hansen is looking to become the first Dane since Thomas Bjørn in 1995 to finish the season as European Challenge Tour Number One by claiming victory at the Ras Al Khaimah Challenge Tour Grand Final.

The 28 year old goes into the season-ending event with a lead of 47,024 points over second-placed Victor Perez after an excellent campaign which has included two victories, five top fives, and nine top ten finishes.

“I’m feeling really good heading into the Grand Final,” said Hansen who won his first Challenge Tour title at the Turkish Airlines Challenge earlier this year. “The goal this week is to win again and to stay at the top of the Rankings. This has been the season of my life. Everything in my game has been so steady and everything has improved, I’ve also managed to keep so calm and cool throughout the year.

“To be in this position is great as you do feel relaxed. The guys lying around the top 15 know that they need a good result here to save their season next year, or even their career.”

With 184,260 points already banked, Hansen can also make more history in the Middle East. A victory would see him break the record for the largest points haul in a single Challenge Tour season – Ricardo Gouveia is the current holder of that title after he earned 251,592 points when he topped the Rankings in 2015.

Meanwhile, Perez comes into the tournament in red-hot form with seven consecutive top 20 finishes including a win at the last Challenge Tour tournament, the Foshan Open, which saw him surge from 16th to second in the Rankings.

“I am delighted to be here and it’s a big change from last year,” said the Frenchman. “To go into the final last year in 16th was a very different challenge as now I start the week in second place and there is a lot on the line – I can win the Order of Merit, I just need to take down JB.”

Kalle Samooja is also in the hunt to be named Challenge Tour No.1 and currently lies in third place on the Road to Ras Al Khaimah. The Finn secured his European Tour status earlier this month thanks to a win at the Hainan Open but will be hoping to put the icing on the cake by topping the Rankings following the Al Hamra showdown.

“After the win in Hainan, this year has been ten out of ten,” said Samooja. “Before that I’d had a lot of top tens and had been close on a couple of occasions, and now I can’t wait for the future. I have to win this week to have a chance to finish the season as number one, but it is a similar course to the one in Hainan and hopefully that will play to my advantage.”

As well as the battle to be named Challenge Tour No.1 there are 15 coveted European Tour cards to be won for those that finish in the top 15 of the Road to Ras Al Khaimah Rankings following the tournament. With only 3,735 points separating Road to Ras Al Khaimah Number 15 Tom Murray and Oliver Wilson, who currently sits in 18th position, it will go down to the wire at the stunning Al Hamra Golf Club.

“The carrot is dangling right in front of you this week but I’m here to try and win this tournament and I have to focus on that,” said Wilson. “If I keep the momentum going and play well every week I will get to where I want to get to, regardless of what happens at the Grand Final.”

Along with Wilson, every player competing in the 45-man field can secure a European Tour card by triumphing in the Grand Final. Antoine Rozner, the 45th and final man into the event, arrives in the United Arab Emirates 41,721 points away from 15thplace with 72,000 points awarded to the winner.

“There was an article that came out on the Challenge Tour website that was mentioning all the big moves that players have made at the Grand Final in the past,” said Rozner. “I think it’s given me a bit of motivation because anything can happen, it’s just a golf tournament and there are only 45 players. If I win at the end, I’ll be on the European Tour, it’s great.”

“Sports and adventure tourism is key to Ras Al Khaimah’s tourism development strategy and this prestigious golf event is an important addition to our events calendar that will inspire more golf enthusiasts to play where the professionals play, and non-players to visit Ras Al Khaimah during the tournament to enjoy the exciting atmosphere and entertainment on offer at Al Hamra. We wish the players all the success in the tournament and we envisage an exciting itinerary for players and spectators alike.”

Meanwhile, the players got a taste of the course on Monday as they took part in the Ras Al Khaimah Challenge Tour Grand Final Pro-Am. World renowned golf course architect Peter Harradine’s two sons Michael and Lawrence were part of the winning team in the morning Pro-Am as they were joined by Matt Osbourne and pro Marco Iten on a highly impressive 33 under par.

In the afternoon Pro-Am, Hanif Ibrahim, James Heath and Gregory Matieu and professional Stuart Manley carded a joint score 25 under par to beat Grant Forrest’s team by two strokes. The winning amateurs had secured their places in the event via the hugely popular Golden Ball Series which saw over 800 local golfers competing in events at golf clubs across the UAE to win a spot in the Pro-Am.

The four-day tournament begins at Al Hamra Golf Club at 8.00am tomorrow and is free to enter for spectators. OSN Sports 3 will broadcast a highlights programme every night of the tournament starting at 22:30 with two repeats the following day.