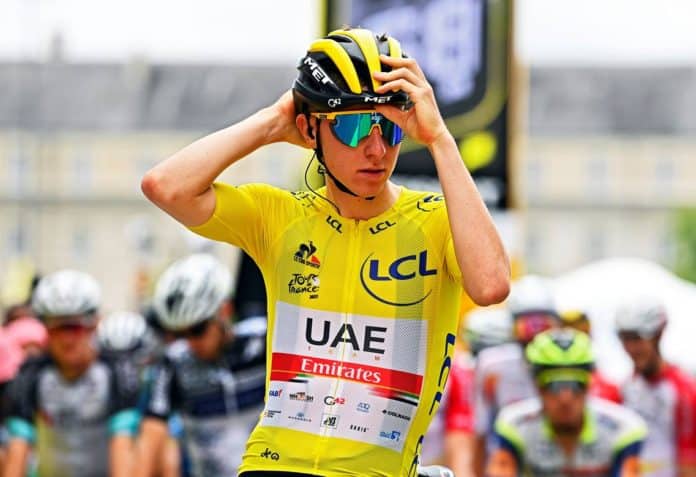 Last September, a relatively unknown rider, from a relatively unsung team, stepped up onto the top spot of the Tour de France podium to claim overall victory, in what has since been heralded as one of the most dramatic bike races in history.

That rider was Tadej Pogacar, and he was representing UAE Team Emirates.

A lot has changed for Pogacar since that day, most notably his status within the pro peloton.

Right up until the penultimate stage of the 2020 Tour, which ultimately won him the race, Pogacar had been considered a rising star, a strong stage racer, a decent climber, a solid time trialist and a potential Grand Tour contender for the future.

Then, the day before the peloton rolled into Paris, he put in the performance of a lifetime, one of the greatest ever seen in the sport. He obliterated the competition and usurped race leader Primoz Roglic after overturning a 57” deficit during his legendary 36km Time Trial effort up La Planche des Belles Filles.

In that instant Pogacar became a name to remember. He became a competitor to fear. A rider who could never be underestimated and would forever be marked.

If winning one Tour de France with the final throw of a dice is difficult. Winning a second, when the whole world is watching, could be considered almost impossible.

Yet the 22-year-old Slovenian superstar, with the unwavering support of his seven-man squad and an entire team of coaches, doctors, nutritionists, chefs, drivers, mechanics and soigneurs, has managed to do it again and retain his status as the current Tour de France champion.

Here are the seven magnificent moments that defined his victory. 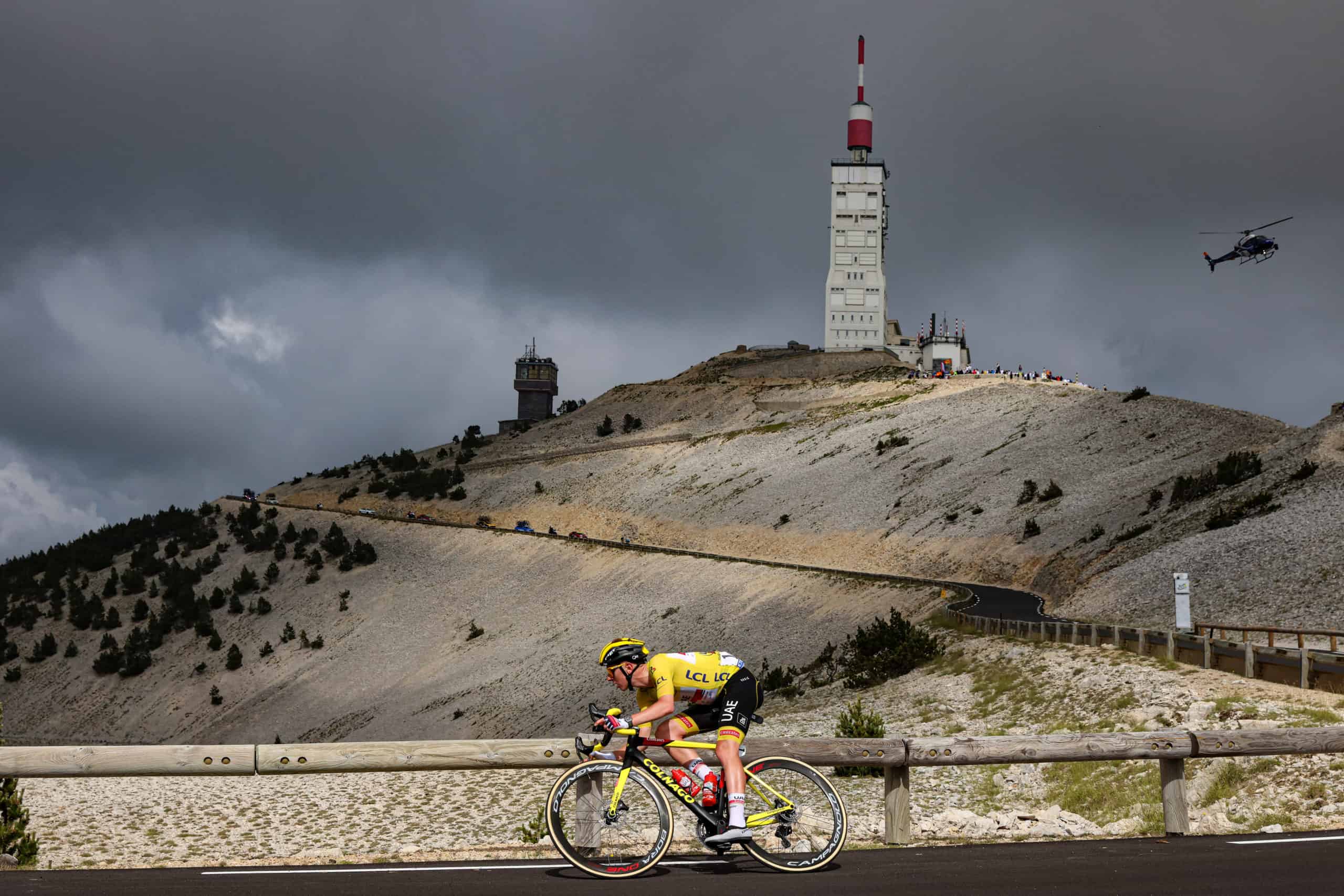 Crashes are an inherent, yet ugly, part of the sport and this year’s Tour de France had more than its fair share in the first week. The opening stage was marred by two huge crashes that brought the majority of the peloton down and began to have an impact on the health of many GC riders. The trend continued into stage 2, however Pogacar’s shrewd positioning in the peloton enabled him to avoid the splits it caused and go on to contest a sprint finish for second place.

This performance also pushed him up in the GC standings to second, just one spot behind the yellow jersey Matthieu Van de Poel.

Stage 3 was equally chaotic and more crashes caused mayhem within the bunch. Whilst Pogacar was able to avoid hitting the ground he was caught behind crashes and finished 26” behind the front group, losing valuable time on a number of his GC rivals.

However, Primoz Roglic (Jumbo-Visma), who was arguably Pogacar’s biggest threat, did fall badly. The crash caused him to lose over a minute and eventually withdraw from the race due to the injuries he sustained.

When the final calculations were finished, Pogacar was sitting 6th in the GC, 39” behind the race leader. 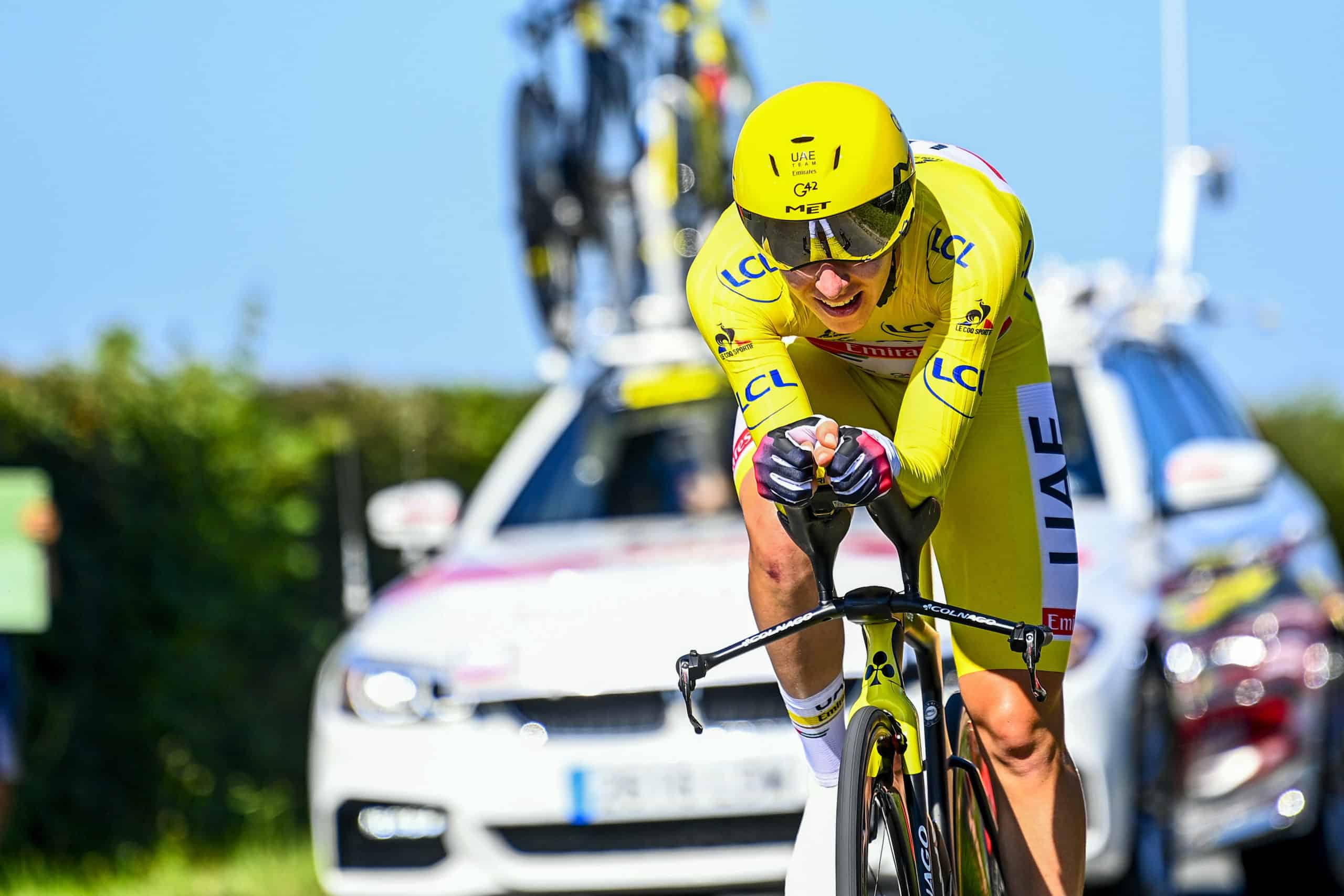 Stage 5 saw the arrival of the Tour’s first Time Trial, a 27km rolling route from Changé to Laval. After four days of sprint finishes, it also became the first time the spotlight was turned on the GC contenders – and there was no doubt that Pogacar shone the brightest.

His Performance was startling. The young talent rode to victory with an average speed of 51km/h for 32minutes, beating the European time trial champion Stefan Küng (Groupama-FDJ) by 18 seconds. Whilst the effort was not quick enough to take him into first place in the GC standings, Pogacar had firmly asserted himself as the strongest man in the race, sitting 8 seconds behind the yellow jersey, van de Poel. 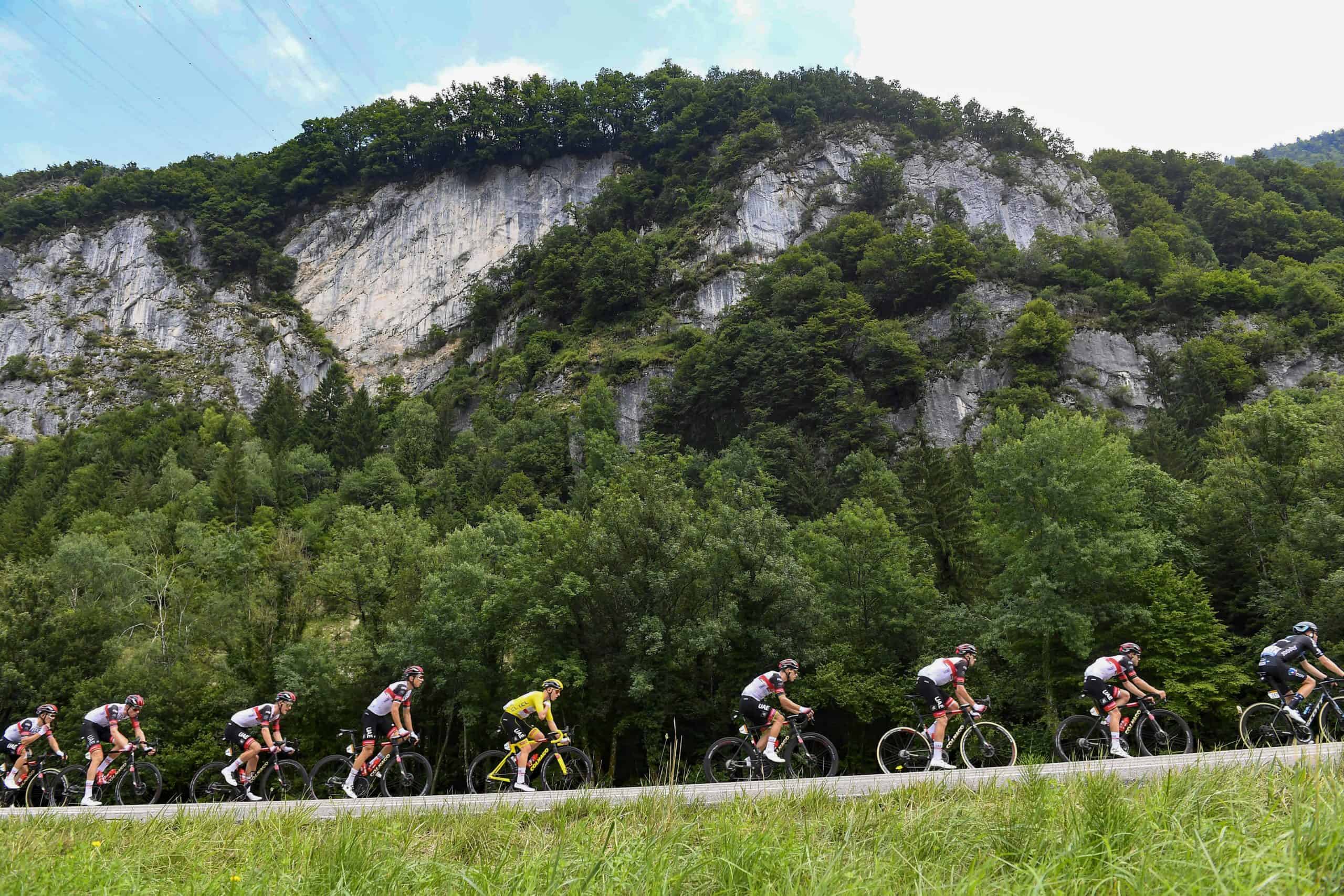 With 249km of rolling terrain, stage 7 was earmarked as a day for the breakaway. However, no one could have imagined such a strong group of riders – with the yellow jersey van de Poel and GC contenders Vincenzo Nibali (Trek-Segafredo) and Simon Yates (Team Bike Exchange), making the split. In total, 29 men got away and stretched their lead to over 6 minutes.

All eyes turned to UAE Team Emirates to manage the race and close the gap and they did just that – each man to the last. Mikel Berg, Marc Hirshi, Rafal Majka, Rui Costa, Davide Formolo, Brandon McNulty and finally Vegard Stake Laengen all turning themselves inside out to reduce the gap and ensure Pogacar would remain in contention for the yellow jersey when the race got into the mountains. 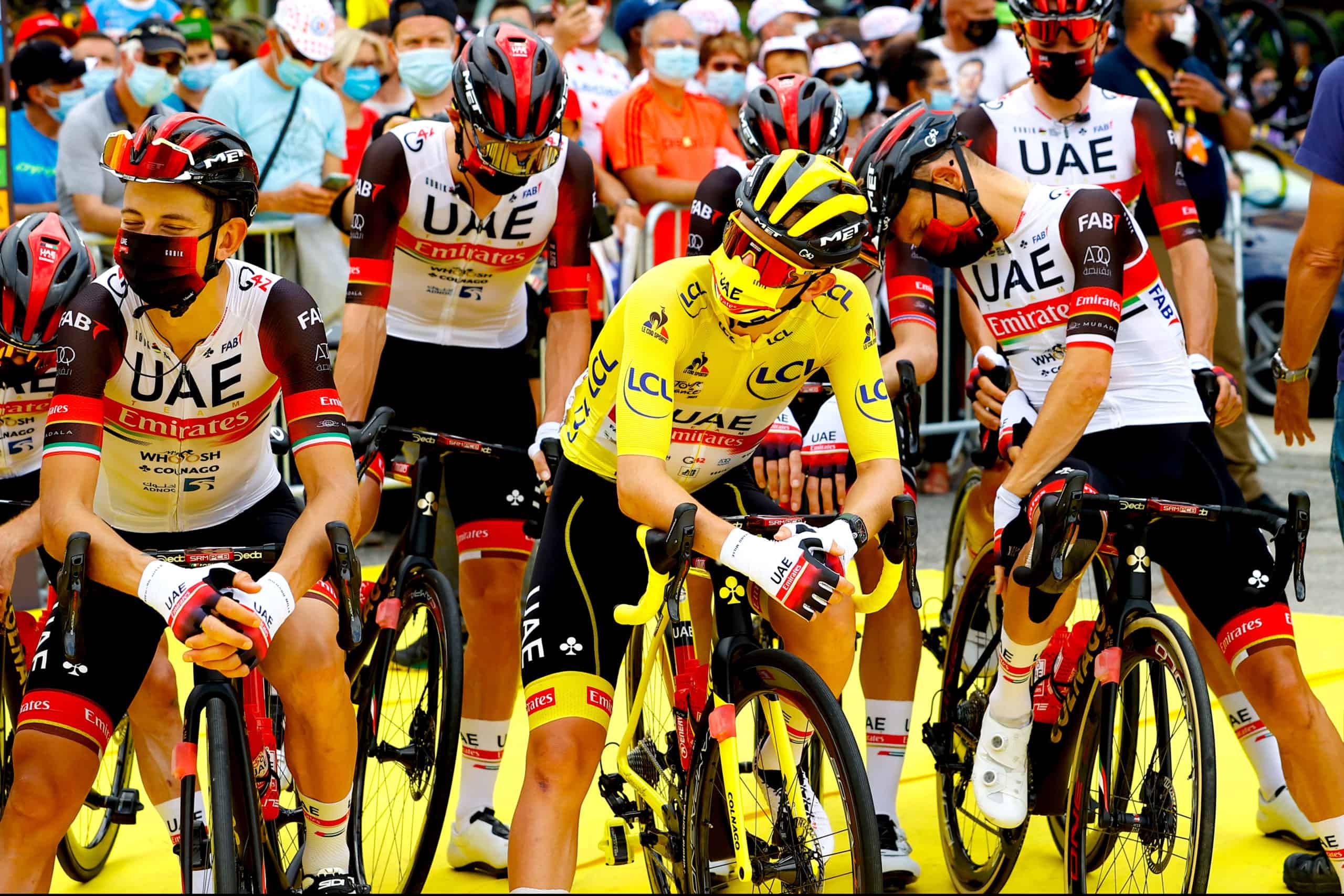 Whilst Dylan Teuns (Bahrain Victorious) won stage 8 of the Tour de France it will be remembered – for many years to come – for the swashbuckling exploits of Tadej Pogacar.

On the first day in the mountains, the reigning champion asserted his dominance with an astonishing long-range solo that saw him put more than three minutes into his GC rivals, as he rode them off his wheel and hunted down the breakaway group with four brutal kms of climbing to go.

His attack came off the back of another impressive team performance which saw Costa, McNulty and Formolo drill the pace on the climbs and set up Pogacar for an acceleration that nobody could follow.

He finished third overall, but jumped to the top spot of the GC podium, four minutes and 38 seconds ahead of his closest rival. UAE Team Emirates were finally in yellow – but would now have to defend it for 13 more stages until they reached the Champs Elysée. 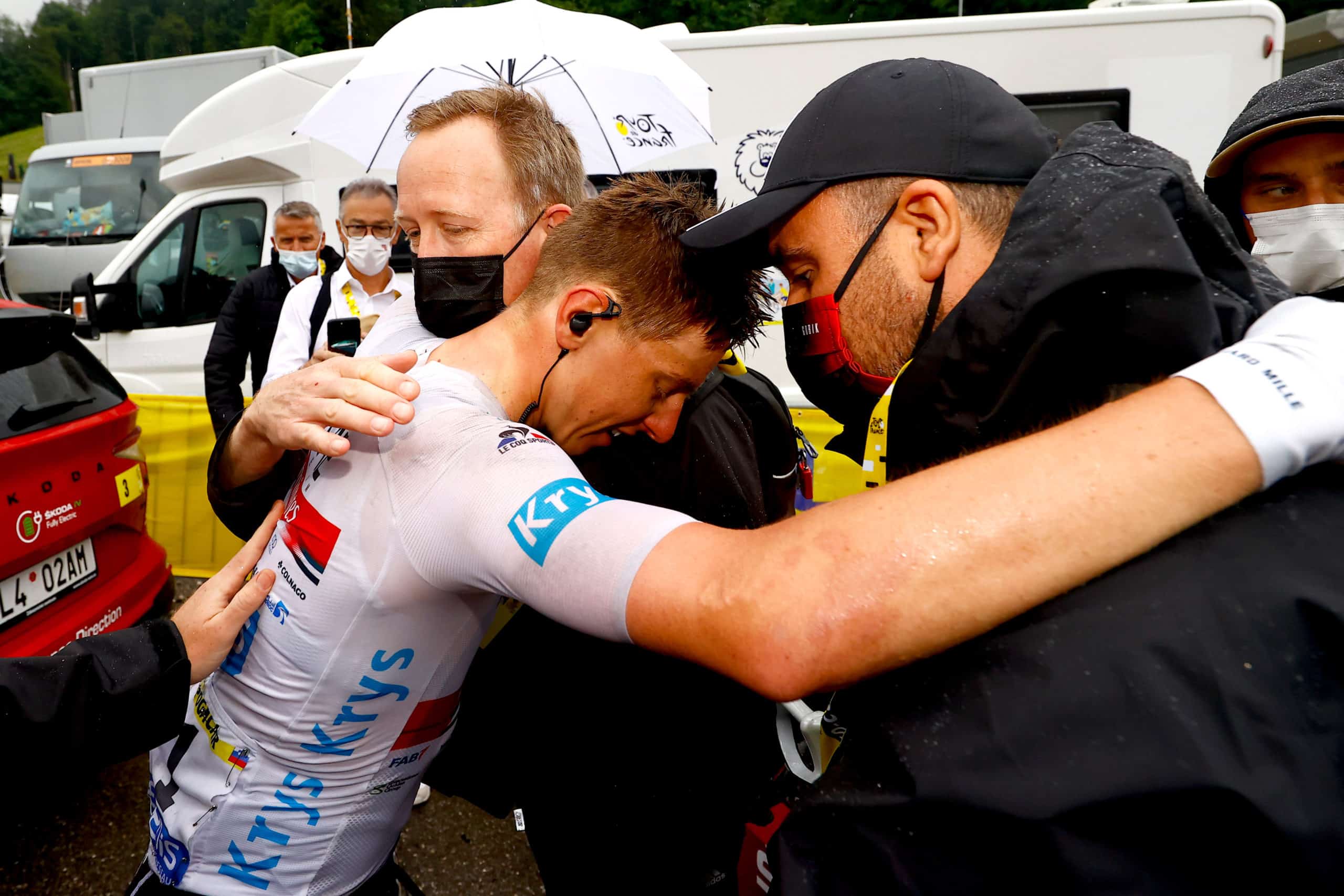 After Pogacar’s enormous effort on Le Grand-Bornard, many were questioning how the young rider would bounce back the following day. If there were any doubts as to his powers of recovery, they were quickly put to bed on Stage 9 as the peloton headed to another summit finish at Tignes.

The stage win was taken by Ben O’Connor (AG2R Citroen), who flirted with the virtual maillot jaune at various points, before Pogacar once again asserted himself on the race, responding to an attack from Richard Carapaz (Ineos Grenadiers) at the four-kilometre mark and continuing to push to the top and close the gap between himself and O’Connor.

Pogacar finished sixth, 6 minutes and two seconds behind the race winner – but remained over 5 minutes ahead of the GC contenders that jostled behind him.

Stage 11 was one for the history books as the peloton ascended the formidable Mont Ventoux, not once but twice and Pogacar showed his only sign of weakness during the entire three-week race.

As the front group of GC riders neared the summit of Ventoux for the second time, the young Danish rider Jonas Vingegaard (Jumbo-Visma) attacked. The unexpected move splintered the group and put a number of riders in trouble. Pogacar was able to follow and looked comfortable until the duo were 1km from the summit and he lost the wheel with Vingegaard easing clear and putting in some distance as he crested the climb.

However, the unflappable Pogacar showed his experience, waiting up for Rigoberto Uran (EF Education Nippo) and Richard Carapaz (INEOS) to join him before working as a trio to reel Vingegaard back in and minimise any time loses. 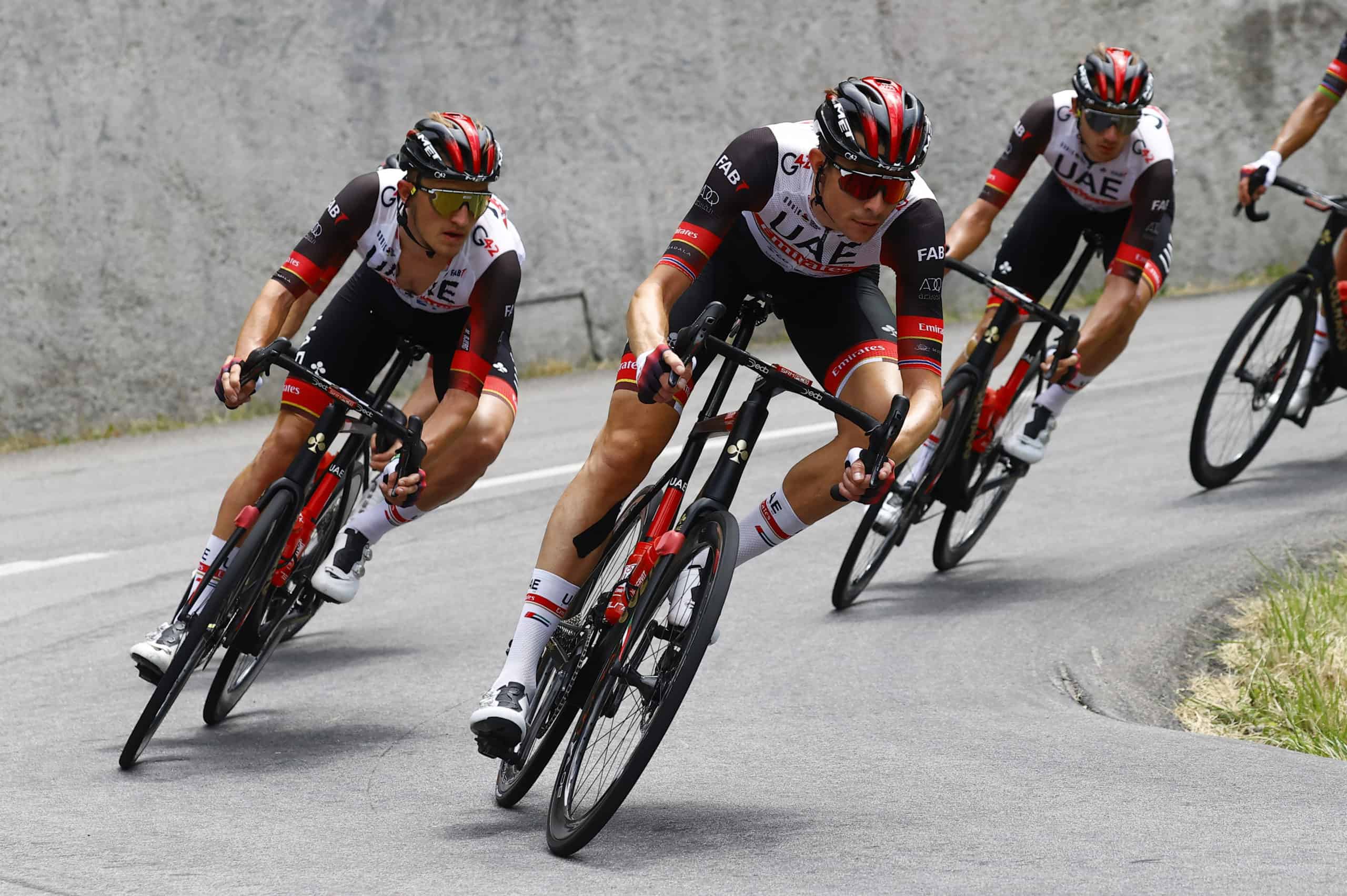 When a rider dominates a Grand Tour from such an early point, there is always a risk of them fading away in the final week. However, Pogacar, who appears impervious to tiredness, was able to buck this trend and take his rightful place as Winner Elect of the 2021 Tour de France with back-to-back wins in stage 17 and 18 respectively.

The brace of summit finishes on the Col du Portet (stage 17) and Luz-Ardiden (stage 18) gave Pogacar the chance to sit back and ride defensively, letting his rivals do the work as they attempted to gain time on the other GC hopefuls. But Pogacar had unfinished business and still dreamt of winning a stage wearing yellow.

Both stages played out in similar fashion, with the cream rising to the top in the final kms of the race. Pogacar, Vingegaard and Carapaz were the isolated trio left fighting for the win on both climbs and – on both occasions – it was the strongest man that took the spoils.

After 71:26:27” of racing at this year’s Tour de France Tadej Pogacar had fulfilled his lifelong dream of winning in the yellow jersey, a dream that very few people have achieved.

Then, in true Pogacar style, he went on to replicate that unbelievable feat the very next day.

How does he sum up his performance and experience?

“I am super happy. I couldn’t have done this without the support from my teammates. They’ve been fantastic this Tour and I am very proud to be a part of such a great team. There were so many special moments throughout this race but winning the Stage on the Col du Portet stands out as one of my favourites.

The Tour this year has been a little different with more time in the yellow jersey and more media commitments, but it was largely the same when I was riding. Every day I gave it full gas and gave it my all. I couldn’t have given anymore. I have always been confident in my ability and have stayed focussed on the Tour. Right now, I am staying relaxed and just want to enjoy the moment.”