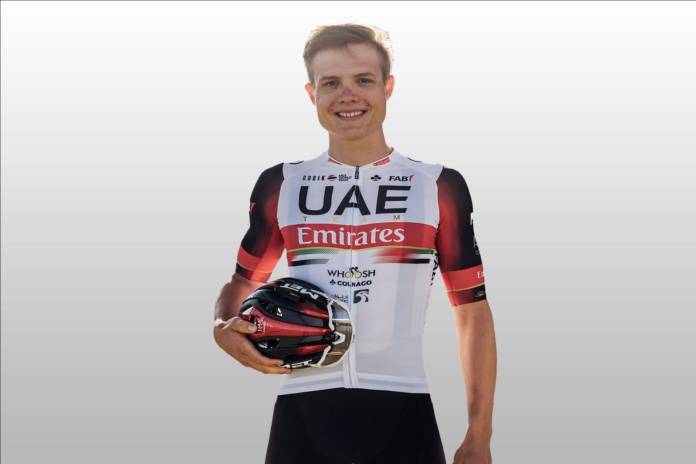 Felix Groß: “I have almost no words, I am really really happy. The chance to ride in a such great team is something I wouldn’t have thought possible. I’ve been on the track for many years now, and I believe I can be very successful on the road as well. I feel like I’m in the right place and I am looking forward to wearing the UAE Team Emirates jersey next year.”

Groß, who currently races on the road at Continental level, has predominantly competed on the track in the junior and under-23 categories. His most notable success came recently in 2020 where he won gold medals in both the Individual Pursuit and the Kilometre TT events, as well as a bronze medal in the Men’s Team Pursuit at the European under-23 Track Championships in Fiorenzuola d’Arda in Italy.

“My first contact with the team was after my success at Fiorenzuola. What came out of it, the participation at the camp in Abu Dhabi in January, various tests, talks – the hope that the big dream would come true: a spot in the WorldTour. And now it has come true. I’m looking forward to everything that’s coming. And that maybe I can take some of the strengths I’ve developed on the track with me onto the road. At the beginning, of course, there’s a lot of learning and gaining experience.

I’m excited about what this year will bring, the chance to go on a journey with UAE Team Emirates, I’m incredibly excited.

However, firstly, along with the support of the German Cycling Federation, I will be putting all my focus on the Olympic Games.”

The German will join the team later in 2021 as a stagiaire after the Olympic Games where he will represent his nation.

Joxean Matxin Fernandez (Team Manager) : “Felix is a young, talented rider who is a top-class rider on the track and we hope to help him make the transition to the road. We had him with us at the early season team camp in Abu Dhabi and he impressed us a lot and is a rider who has a great attitude. We see great potential in him and we are excited for him to join us at the end of the year as a stagiaire after the Olympics.”

Football Village – The best football experience in the city returns...

It offers the best big-match football atmosphere in the city – and now the famous Football Village, JBR at DoubleTree by Hilton Dubai Jumeirah...

2021 ADNOC Abu Dhabi Marathon to take place in November as...