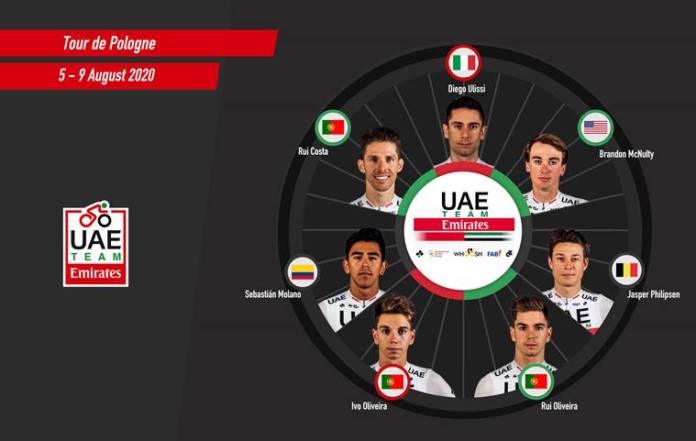 The racing has started to come thick and fast for UAE Team Emirates as the rescheduled season gets underway. After impressive performances at the Vuelta Burgos, which saw Fernando Gaviria dominate a sprint stage, and Davide Formolo’s podium finish at Strade Bianche, the team is fired up for its first WorldTour stage race since the restart; the Tour of Poland (5th – 9th August)

A squad of seven, led by Diego Ulissi, will tackle the five day event which starts in Chorzow and finishes in the beautiful city of Krakow after 891.3km of tough terrain.

Ulissi will be backed up by a Portuguese trio of Rui Costa and Ivo and Rui Oliveira, American Time Trial specialist Brandon McNulty, as well as Sprinters Sebastian Molano and Jasper Philipsen.

Diego Ulissi said: “After the win by Fernando in Burgos and the podium of Formolo in Strade Bianche we are heading to Poland full of confidence. Personally my condition is good and there are a few stages there that suit me well. With the strength of the team we are bringing, I think we can do good things there.”

The team will be guided by Sports Directors Simone Pedrazzini and Bruno Vicini.

The 2017 Italian National Champion Fabio Aru will lead teams at both races – which are packed with mountainous climbs.

Aru said: “To be back racing again is a great feeling. A top-10 at Burgos shows that the condition is pretty good, but I am still building towards my top level. In France the goal will be to continue building form towards the big goals like Lombardia and eventually the Tour de France”