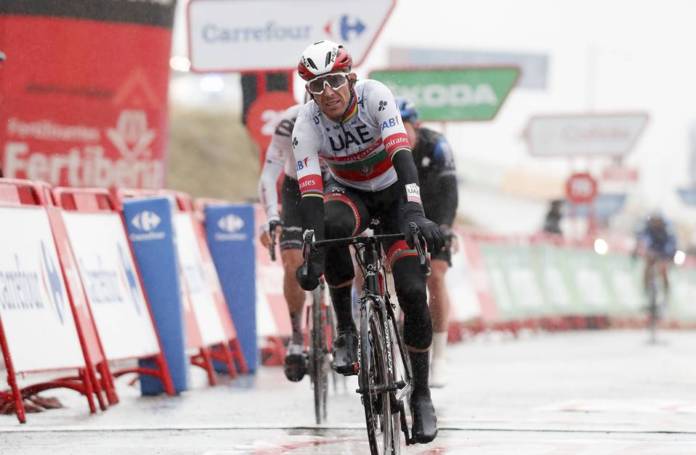 On what has been a mountainous start to the Vuelta Espana, the UAE Team Emirates riders once again faced another day in the hills.

Starting out from Biescas, the 6th stage of the Spanish race ended with the arrival at high altitude at Aramón Formigal,on a day that saw Rui Costa take third place, 25” behind the winner Ion Izagirre (Astana).

On a stage marked by constant rain, 24 brave souls made the day’s main breakaway. Among the men in front, Rui Costa and Colombian Sergio Henao were present for UAE Team Emirates. Climbing into the Pyrenees, the breakaway got the better of the chasing peloton, thus giving the attackers the chance to fight for stage success. In addition to Rui Costa’s 3rd place, UAE Team Emirates also entered the top 10 with Henao, 9th at 55 ”. David De La Cruz, 17th at the finish line (+1’23“), gained three positions in the general classification, climbing up to 9th place, 2’46” from the new red jersey Richard Carapaz (Ineos-Grenadiers).

The team also lies 2nd in the teams classification heading into week 2.

Rui Costa: “Today it wasn’t originally the plan for me to go in the breakaway. Henao got in the break originally and then I was covering the moves behind and ended up in it also.
The sensations were good but just a little bit tired from yesterday. I’ll be looking at the parcours for more chances later in the race. De La Cruz is also moving up the GC which will focus on too.”