Home News UAE Team Emirates’ Alessandro Covi on the podium at the Tour of... 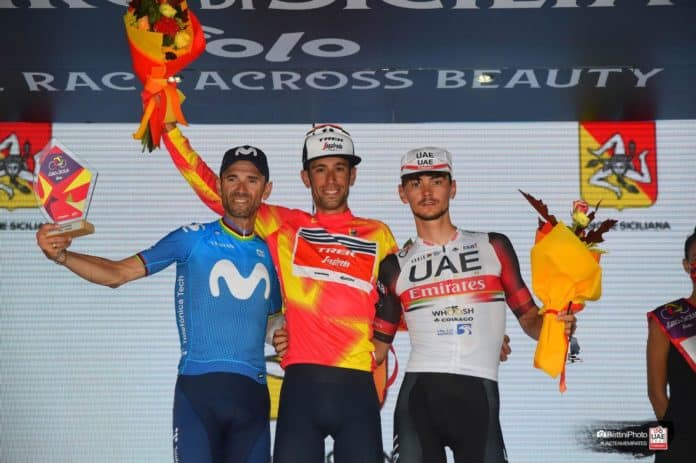 It was a thrilling finish to the final stage of the Giro di Sicilia with Alessandro Covi topping off a successful week of racing for the team as he secured at well-earned 3rd place on both the stage and the General Classification.

The race from Sant’Agata di Militello to Mascali (180km) came to life on the final ascent of the Sciara di Scorciavacca (9.7km, 6.4 %) where persistent work from David De La Cruz narrowed the group down to the main favourites, including Covi.

Local hero Vincenzo Nibali (Trek-Segafredo) took flight from the group to build up a lead and win solo with Covi sprinting home to third in the group behind.

Nibali took the overall title in the process, while Covi ends the week on the GC the podium whilst also taking first place in the young riders classification.

The result brings an end to a successful week for UAE Team Emirates after a double stage victory and a stint in the leader’s jersey for Sebastian Molano.

Covi: “I’m happy with this third place in the overall, particularly to be on the podium next to two huge champions of cycling. Obviously, personally, I would have liked to have won a stage after coming so close, but we got two with Molano so we leave the race very happy. I’m now really looking forward to the final races of the season.”