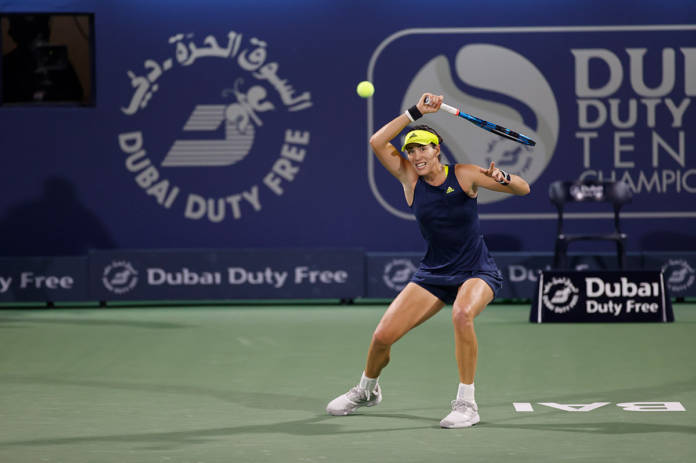 Aryna Sabalenka and Garbine Muguruza avoided the succession of upsets as just three seeds remained at the Dubai Duty Free Tennis Championships by the end of play on Wednesday, as second seed Karolina Pliskova slumped to a stunning 6-0 6-2 third round defeat at the hands of Jessica Pegula, and fifth seed and 2019 champion Belinda Bencic was beaten 6-1 2-6 7-5 by tournament wild card Anastasia Potapova.

Arab sporting icon Ons Jabeur failed to advance into the quarter-finals as she fell 6-3 6-3 to Jil Teichmann, but teenage sensation Coco Gauff made another step towards contesting the final on her 17th birthday by defeating qualifier Tereza Martincova 6-4 6-2.

“Jil’s a great player,” said Jabeur. “It wasn’t my best game today. A lot of unforced errors. Obviously it wasn’t my day today and, as I’ve said, I haven’t felt great lately on the court and I wasn’t expecting much from this tournament and I was taking it day by day. It was kind of tough for me.”

Muguruza was particularly impressive against Swiatek, dominating her less experienced opponent in the first set and then holding off her opponent’s greater challenge in the second.

“I took my opportunities and I was efficient when I had to break her serve or stay with my own serve,” said Muguruza. “Just happy with the way I started. I was very focussed, very looking forward to the match as well. Sometimes you start a little bit off, but today I felt good on the court.

“It got a little bit more tight and I felt she was playing better and I had to stay strong there and not get tense or nervous and try to stay calm to be able to close the set and not give her the chance to go to a third set.”

Pliskova’s meeting with Pegula was their second meeting in two weeks, with Pegula also coming out on top in Doha with an equally emphatic 6-3 6-1 score, and the American secured victory in just 53 minutes. While Pegula has flourished, Pliskova has now lost her last seven matches to opponents ranked outside of the top 20.

Pliskova had struggled on Wednesday to overcome Anastasija Sevastova in a three-set battle that stretched to more than two hours, and that might have played a part in her defeat. She produced seven double faults, made 26 unforced errors and won just a third of the points against her dominant opponent.

“Definitely she has a lot of confidence because anytime there is a close game she’s able to play some great points,” said Pliskova. “I think she played some good tennis and I was just not able to have any answer. My tennis was not there where I want to be but I think she has a lot to do with it. I have to give a lot of credit to her”

In contrast, Pegula had breezed through her two earlier matches this week, giving up just three games in each, and her confident performance always had Pliskova on the back foot. Her win over sixth-ranked Pliskova follows an equally impressive victory over world number five Elina Svitolina at the recent Australian Open, where she reached her first Grand Slam quarter-final.

“I think I didn’t give away a lot of free points”, said Pegula. “I think serve and first ball return is what I think I did really well and I didn’t make a lot of errors. That’s what I wanted to do and I think I just stuck with my game plan pretty well and was able to execute it.”

“It is often difficult for a player to follow up a successful tournament by also doing well in the next, a quality that only the best players manage to achieve,” said Colm McLoughlin, Executive Vice Chairman and CEO of Dubai Duty Free. “Jessica Pegula has done that not once, but twice, with a wonderful run at the Australian Open followed not only with another in Doha but with more fine performances this week. We look forward to seeing how she does in the quarter-finals.”

“The days when the top players could be sure of advancing to the final stages of a tournament are long gone, and the depth of women’s tennis now means that no player, no matter how accomplished or highly ranked, can be sure of success,” said Tournament Director Salah Tahlak. “That has clearly been the case this week, and the only certainty as we move towards an intriguing climax is that a new champion will be crowned here on Saturday.”

The WTA1000 tournament continues until 13th March and then will be followed between 14th and 20th March by the equally exciting ATP event, headed by reigning US Open champion and world number four Dominic Thiem, who will be in competition for the title against 2021 Rotterdam champion and world number eight Andrey Rublev, three-time Grand Slam champion Stan Wawrinka, 2020 US Open quarter-finalist Denis Shapovalov, 2018 Dubai champion Roberto Bautista Agut, 2021 Montpellier winner David Goffin and 2020 US Open semi-finalist Pablo Carreno Busta.

The Dubai Duty Free Tennis Championships is owned and organised by Dubai Duty Free and held under the patronage of H. H. Sheikh Mohammed bin Rashid Al Maktoum, Vice-President and Prime Minister of the UAE and Ruler of Dubai.