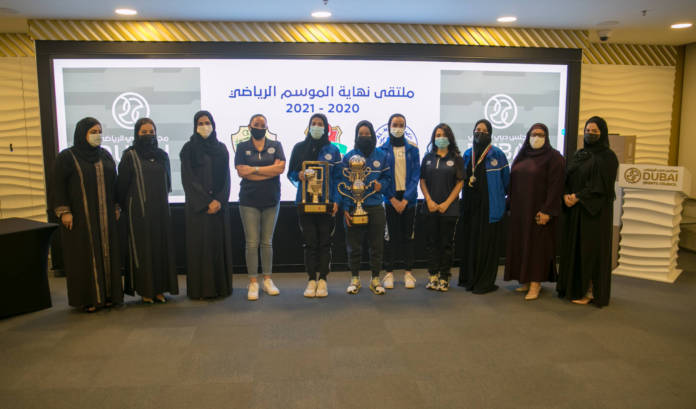 Bringing the curtains down on the 2020-21 sports season, the Women’s Sports Committee of Dubai Sports Council organised a forum to celebrate the achievements of female athletes from Dubai clubs and their women’s teams.

Delivering the opening address and welcoming the female athletes, Rowdah Al Mehrizi said: “We meet today to celebrate, like every year, the continuous success of our outstanding athletes and their efforts over the course of a whole sporting season, which deserve praise.

“Thanks to the guidance of our wise leadership and their unlimited support, women’s sport has achieved a lot of success. Our female athletes have been able to reap the fruits of this support by finishing on the podium in different sports and events, and Dubai Sports Council is pleased to celebrate their achievements and thanks them for their outstanding efforts throughout the season, and also salutes them for their determination to win and succeed.

“We are honored to have these heroines with us, and the Women’s Sports Committee congratulates them on their outstanding results during the past season. Their success is our success and their achievement is an achievement for every Emirati women and the whole country. So we congratulate them and we wish them continuous success.”

The forum also saw supervisors of teams from each club talk about their most important milestones, and their training methods and schedule, about their strategies and the challenges they faced, as well as about their future plans and goals.

Nadia Khadim, the volleyball star from Al Wasl club who has retired from playing and turned to coaching now, also spoke at the forum, sharing her experience as a player and the hard work and efforts that paved the way for her success.

Khadim is one of the graduates of Dubai Sports Council’s program to prepare Emirati coaches to lead women’s teams in Dubai clubs, in cooperation with various local and international federations.

At the end of the forum, the Women’s Sports Committee honored athletes for their achievements in the season, and also honoured Khadim for her decorated career as a player.

Al Nasr’s archers took the 10m title in a Ramadan tournament and finished second in the Al Dhaid Championship, while the swimmers from the club took first and second position in the Emirates Swimming Cup.

Shahd Ahmed Khurram, a fencer from Shabab Al Ahli, was runners up in sabre and third place in foil in the tournament organised by the Fencing Federation.