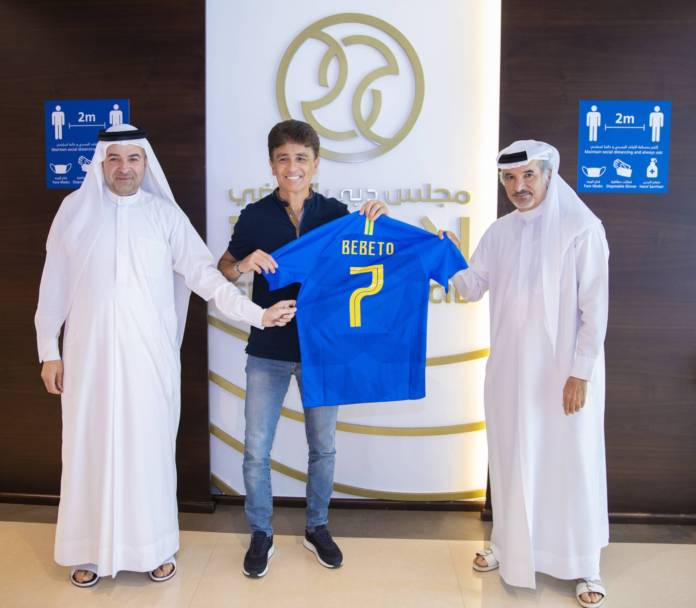 HE Saeed Hareb assured Bebeto of Dubai Sports Council’s complete support and said the Council was always keen to invite world’s leading sports stars, from different countries, to visit Dubai and encourages them to invest in its growing sports sector. He said the Council has been and will always be committed to providing them with any assistance they need, whether in establishing academies here or in organising sports tournaments in Dubai, or facilitating any other venture.

Considered one of the top strikers to play the game, Bebeto, expressed his admiration for Dubai’s amazing infrastructure and its tourism and sports facilities. “I see something new and amazing every time I come here,” said the 56 years old.

With its lavish architectural wonders, dreamy landscape, ultra-modern infrastructure and an open-arms policy towards people of every nationality and race, Dubai has been wooing the world’s top sports stars for years and many of them call Dubai their home now, including the likes of tennis royalty Roger Federer, Formula One ace Fernando Alonso and British boxing star Amir Khan.

The headquarters of the Dubai Sports Council welcomed The former Brazilian football star, “Bebeto”, the World Cup champion in 1994
He was received by HE Saeed Hareb, Secretary General of the DSC, and Nasser Aman Al Rahma, Assistant Secretary General, pic.twitter.com/QVCJ3ifOLV

Dubai Sports Council has played a leading role in welcoming these stars to Dubai and encouraging them to invest in Dubai’s burgeoning sports sector and open academies. The Council has always encouraged sports stars to join Dubai’s ever-growing list of celebrity residents and has facilitated their move to the Emirate.

Praising Dubai, Bebeto said: “Dubai is the preferred destination for Brazilians, as they love it here and always look forward to visiting the city. I have visited Dubai a few times – this is my fourth visit – and I have witnessed its incredible growth first-hand.

“Every time I come here, I find something new – something that makes me feel delighted and leaves me astonished about the pace of development in the city, and, at the same time, reinforces Dubai’s position as one of the top global destinations.”

Bebeto added: “I was honored to have trained under the supervision of great Brazilian coaches, who had worked in the UAE as well, namely Mario Zagallo and Carlos Alberto Parreira. These coaches achieved successes in the UAE, and their success laid the foundations of this strong sporting relationship that has developed since between the UAE and Brazil.”

Bebeto was one of the star speakers in the second edition of Dubai International Sports Conference, which is organised every year by Dubai Sports Council annually.

With 39 goals in 75 appearances for Brazil, Bebeto is the sixth highest goalscorer for his national team, and was a winner at the 1989 Copa América and the 1997 FIFA Confederations Cup with the Samba Boys, alongside the 1994 FIFA World Cup. He has also won an Olympic silver (1988) and bronze medal (1996) with Brazil and was named South American Footballer of the Year in 1989.

A member of the Brazilian Football Museum Hall of Fame and named as one of the 100 Greatest Footballers of All Time by World Soccer magazine, Bebeto was a prolific goalscorer and an excellent finisher. Not a physically imposing figure on the pitch, he used his agility and intelligence to lose his markers in tight spaces, and was blessed with vision, outstanding technical skills and close control.