Kai Greene and Jay Cutler, two of the biggest names on the professional bodybuilder international circuit, have turned the sandy seafront of Jumeirah Beach Hotel with the help of Talise Fitness into Dubai’s very-own ‘Muscle Beach’.

Ahead of their highly-anticipated appearances at this weekend’s Dubai Muscle Show, which runs Friday 8 and Saturday 9 December at Dubai World Trade Centre (DWTC), the pumped-up duo squeezed in one final workout on the new-look beachfront opposite the Beach Lounge at the five-star Jumeirah Beach Hotel, which overlooks the iconic Burj Al Arab Jumeirah. The oiled-up pair spent the morning flexing their pecs and pumping iron in preparation for a Dubai Muscle Show bill that will feature hundreds of sample giveaways, fitness competitions, celebrity meet and greets and more.

“I’ve worked out on some of the best beaches in the world, but this one has some serious muscle,” said Greene, who won the Arnold Classic in 2016 and counts three runner-up Mr. Olympia finishes to his name. “Bodybuilders love a suntan, so there’s nothing quite like doing some weight sets on the beach – especially when you have a view of one of the world’s most iconic buildings.”

With more than 16.5 million social media followers between them, Greene has emerged as a breakout TV star thanks to his role as Funshine in season 2 of Netflix hit, Stranger Things. The American was also involved in the filming of upcoming martial arts movie, Crazy Fist, due for release in 2018. The winner of four Mr. Olympia titles, Cutler is a legendary IFBB professional bodybuilder who has built a lasting legacy on sacrifice, dedication and hard work – not to mention a reported net worth of $81 million. “We’re already super pumped about seeing our fans at the Dubai Muscle Show, so it’s been great having one last beach workout with Kai before the show,” added Cutler. “I mean, come on, how often do you get to pump iron in front of the Burj Al Arab Jumeirah?” 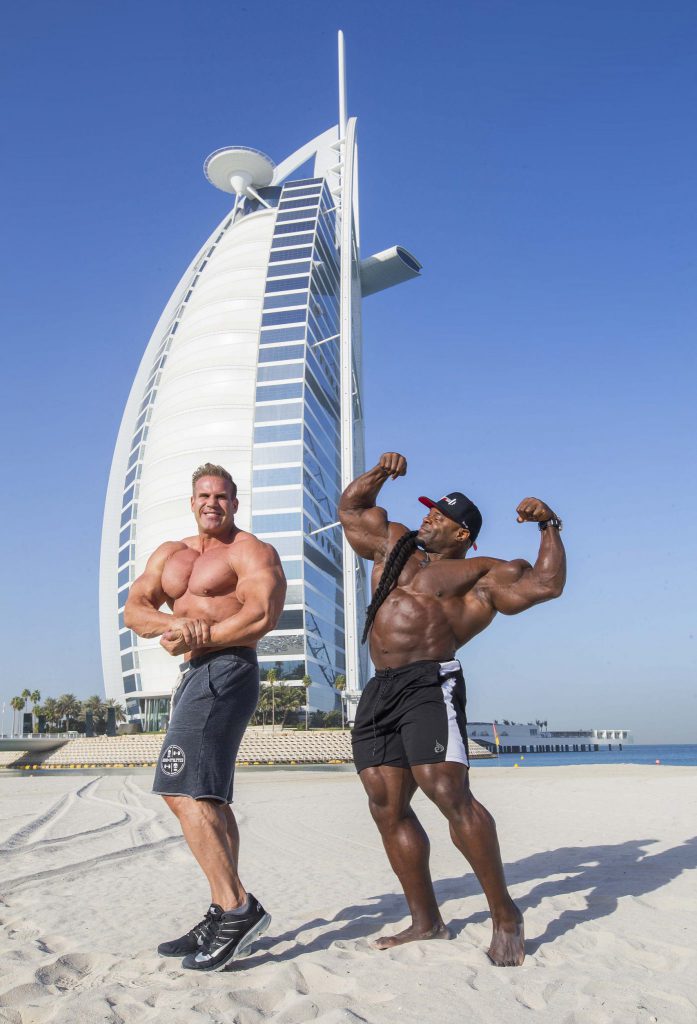