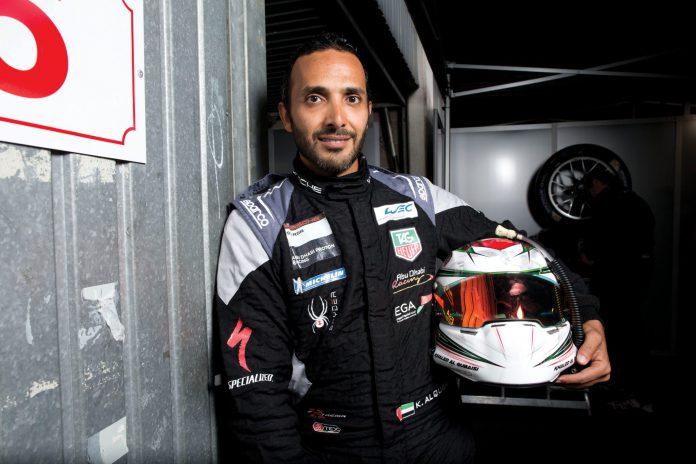 The exposure of motorsport is growing at an explosive pace in the Middle East. The Bahrain Grand Prix has been around for eleven years now and the Abu Dhabi GP is the most important race of the Formula One season. It’s all well and good having these fabulous tracks and showcase events, but where are all the Emirati drivers? Khaled Al Qubaisi is still the leading man after being the first UAE national to race the Le Mans 24 Hour in 2013. The Emirati hasn’t looked back since, competing for the third time in June as well as in numerous of other endurance races.

Al Qubaisi went into France’s iconic race with his Porsche team this year, full of confidence after finishing second last time out in the GT Endurance AM class. But luck wasn’t on his side. A serious freak-accident resulted in the Emirati’s team retiring.
“We were better prepared this year for Le Mans than ever before but things out of our control let us down,” the racer tells SFME. “We had a very unlucky technical fault in the engine, which caused an oil leak that made the car go up in flames. This was really unlucky because it’s so rare in motorsport these days – especially with Porsche. Once in a while these issues happen; it was unfortunate that it occurred for us in Le Mans where it’s worth double points.”

Al Qubaisi raced against the likes of F1 icons Mark Webber and Niko Hulkenberg in the world’s most famous endurance race which proves how far the UAE driver has come since he first went behind the wheel. It wasn’t a straightforward route for a driver born and raised in Abu Dhabi.
“I was always in love with anything involving motor engines when I was growing up,” he says. “Bikes, jet-skis and cars were all my passion. However, we didn’t have the motorsport infrastructure that would take me into karting like many drivers do these days in order to progress.”
The UAE racer’s passion became reality after acknowledging his talent in a friendly race against his friends.
“Back in 2008, I was go-karting with my mates and I was going faster than the professional drivers so I thought I would get a bit more serious about motorsport,” he continues. “I was in the right place at the right time. With the support from Abu Dhabi to go for the Porsche Supercup series and the Formula One in 2009 in Abu Dhabi. It all started from there…”

“There is a massive potential for motorsport in the UAE. We have the talent and capabilities but we just have to put it together and spend some time and focus on their improvement.”

The Middle East has become a hub for racing compared to Qubaisi’s younger years. There are a number of opportunities for avid racers in the UAE like the Dubai Autodrome indoor and outdoor track and multiple initiatives at Yas Marina – home to the Abu Dhabi GP.
One project that has really taken off in the capital is the Toyota Rear-wheel Drive 86 that has just completed a successful inaugural season. The TRD86 is a race calendar that involves all consumers of the car racing on the glamourous F1 track over six different race weekends.
Al Qubaisi is a huge fan of the TRD86 and feels it was a fantastic idea by YAS Marina. “It’s a great move by the organisers. They made it for the sport itself,” he says. “I really want to thank them for this initiative because it’s a major step towards building motorsport in the country.”
“There is a massive potential for motorsport in the UAE. We have the talent and capabilities but we just have to put it together and spend some time and focus on their improvement because I can see the potential already developing.”
Building, improving and molding upcoming drivers is one of Al Qubaisi’s most dedicated pastimes. The UAE’s racing role model is now giving back to the sport and trying to fulfill his ambitions away from the track. He is the managing director of Abu Dhabi Racing and enjoys overseeing the development of young drivers.
“One of my passions is trying to get kids into motorsport through the Daman Speed Academy,” he says. “I’ve recently been in France with the Le Mans Speed Academy team. We have a summer camp here in Europe where we train the kids and get them to do a championship race here and get ready for the season back home.
“We want the children to have a passion for motorsport. Once they have that, they will then put in the time, commitment and focus to develop as drivers. Once we see the basics from the youngsters, we then try to complete and compliment their skills with our coaching.
Al Qubaisi’s teammates have frequently hailed from outside the Middle East in his career.  A testament to the development of racing would be a full Emirati team racing in an endurance race that has a legacy like Le Mans.
Although this is a huge ask, Al Qubaisi is confident it will occur one day – just maybe not the way some people are predicting:

“I believe there could be an Emirati Le Mans team in the future. People are already contemplating a full Emirati team which consists of me and my two daughters!” he laughs. “Maybe in four years time, I don’t know. Once we see the results and get the support, there’s a chance. However, motorsport is a tough and expensive sport. Without major support from big sponsors, it’s very difficult to penetrate.”
Aside from talent and mental strength, physical fitness plays an integral role in the sport especially when preparing for a mammoth race like Le Mans, where each driver races for eight hours altogether.
“I start training seriously two months before the 24Hr race,” says Qubaisi. “At this point I increase the intensity from three times a week to five times a week. The workouts will be around two hours long and sometimes I’ll train twice per day. I have a fitness instructor with me because it helps me push even harder. I do resistance training and CrossFit so it’s a nice mix between cardio and strength exercises. The workouts are really serious because I know how fit you have to be to race in the 24 Hrs.”
The FIA World Endurance Championship represents a more relaxed challenge for Qubaisi in comparison. The races are considerably shorter but are on testing tracks like his recent race on the infamous Nürburgring, Germany.
“For the WEC, I still need to be fit but it’s not quite as serious as Le Mans,” he says. “A six-hour race for us feels like a sprint race. We each race two hours each, one hour at a time, and we are pushing 100%. In 24 Hour races, we are pushing it 95% max because you want to make sure the car lasts until the end of the race.”
After coming agonisingly close to Le Mans success last year, there is one primary future goal that the UAE driver hopes to achieve….and it’s not difficult to guess:
“I would like to achieve a major championship or a world championship,” he says. “My target is to win one of these in the next two or three years. I also want to prepare and mould a professional young UAE driver. With the Grand Prix being in Abu Dhabi, there’s much more focus and ambition to have a UAE driver competing in the top level of motorsport in the future.”
With Al Qubaisi’s intent and talent, the future of motorsport in the Middle East lies with the local racers and not the facilities – something that the region should be proud of.