eSports is quickly becoming a worldwide phenomenon with the best gamers around the world competing for staggering cash prizes. In 2019, Johan Sundstein won a total of $6,889,592 from 108 tournaments making him the highest earning gamer of all time. Therefore next time your parents or partner urge you to get outside or do some work and stop playing games, you should remind them that talented gamers can earn millions through countless hours of practice, mind-boggling tactics and lightspeed hand eye coordination. In this feature, Scott Grayston interviews Dubai’s very own ex-professional FIFA gamer, Uzayr Marria, who once earned a winner’s cheque for 50,000 dirhams in the 2017 Fanta Masters. 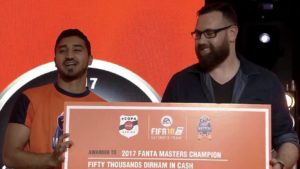 SFME: How did you first get into gaming?

Uzayr Marria: Funny story actually. Back in 2012, my brother and his friends decided to go to a FIFA tournament in City Centre Mirdif and I had to tag along with them. I was 14 at the time and I was playing for fun and not realising I had the potential to play this game at a higher level. Long story short, out of around 500 participants I ended up finishing second and that competitive feeling I will never forget.

SFME: Did you start playing professionally when you left school?

UM: I signed my first contract in April 2018 when I was 19 and at this time, I was in my first year of university. When I got approached by Nasr Esports, it was a great feeling. Knowing all those years of playing FIFA actually paid off, it was always a dream to become a professional footballer but a professional eSports player was something I didn’t realise I could be at the time.

SFME: What have your biggest achievements been in eSports?

UM: I played in big tournaments and in small tournaments. I have won my fair share, but these are the achievements which really mattered to me: 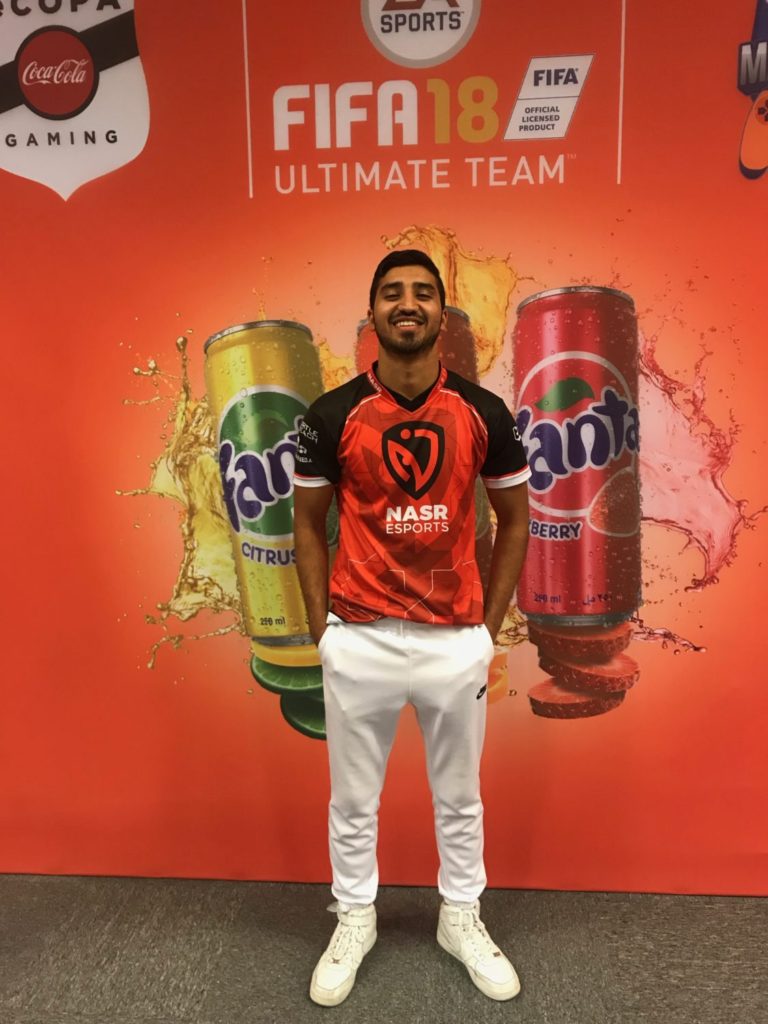 SFME: How different was the level competing professionally to playing your mates at home?

UM: It was completely different; you have to be fully concentrated on the game. There are people watching you on the big screen and cheering you on, it was an amazing experience. Your heart is beating incredibly fast and one wrong pass or player change can end up losing the game for you. In this scene you have to be very patient and not rush things. That was the main thing I was known for in the FIFA scene; I didn’t panic at all – even in high pressure situations. There were times when the other players were actually better than me, but he didn’t know how to adapt to the competitive scene and that’s how I had the upper hand on the majority of these players.

SFME: What’s the difference in how pros play compared to amateurs?

UM: We don’t just start the game and play; we adjust our tactics and mentality before the game and during the game. I read the game very well and within the first 10 -15 mins of the game I knew what type of player I was playing against. I could change the way I normally play to suit their style and use it to my advantage. Versatility is key. Also, like I mentioned before. You have to be calm in high pressure situations. I remember, it was the semi-final of the Fanta Masters Championship in 2017. I was 2-0 down with 30 minutes to go and people had written me off, my opponent was relaxed and was sure he would be victorious at the end. What was I thinking at this time? What I was going to order from room service when I got back to the hotel! I’m not even lying about that, I already secured 10,000 Dirhams so I knew I wasn’t going back with nothing. I played my natural game I ended up coming back and winning 3-2. This meant I went home with the AED 50,000 winner’s cheque. Patience is not a choice, it’s a necessity to play professionally.

SFME: Did you represent the UAE for FIFA? Also I’ve saw you once post about some work you did for Puma gaming?

UM: The big tournaments had people from all over the region like: Saudi Arabia, Bahrain, Jordan, Qatar, Kuwait, Oman etc. When we played in these tournaments, it was like we were representing the UAE. I wasn’t officially representing UAE, there was no legal contract or document or some kind, but I felt like I was. I didn’t work under Puma, however, I did go on media channels to promote the club or game and I spoke about being a professional and what it is like.

SFME: Do you just play FIFA or anything else?

UM: Apart from FIFA, I play Fortnite a lot with my cousins. I do love campaign games, PS3 had probably the best story games which I was hooked on to. Sadly, my love for FIFA has significantly dropped over the years since the game itself has been poor the last 1-2 years. Also, FIFA is one of the few if not the only eSports game which you have to spend thousands on it to actually compete which is absurd. This is why a lot of people have stopped playing competitively around the world.

SFME: Are you surprised there’s so much money in eSports now?

UM: It is crazy how much money is involved in the sports, but I am all for it. People don’t understand how talented you have to be to play in these big tournaments. A lot of people also think it’s just a game, it’s really not. It is a lifestyle and it’s an opportunity to play the game you love and you get paid for it. The mental stress involved in these games is a lot for people to handle so why shouldn’t they be rewarded for their hard work? The gaming scene has increased massively over the last 5 years and it will only get bigger and bigger.

SFME: When you are playing professionally, how is a normal week of practice for you? How often do you play etc?

UM: It’s a normal week like no other to be honest. I’ve put many hours in even before I turned professionally, the only difference is that there are certain expectations you have to fulfil but I enjoyed the pressure because it made me like a better player. I would say I used to put around 5-6 hours a day but would feel like only a couple of hours. It’s a lot I know, but like any other professional job, you have to grind to become a better player or employee.

SFME: How good is the UAE level at gaming?

UM: I would say it’s an untapped market here. We have a lot of good players and some of them have been to international tournaments such as myself which is a huge step for UAE. I believe over the years, UAE will play a big role in future tournaments and people will realise that we are not here to mess about.

SFME: Can you see eSports taking off now with the corona virus outbreak?

UM: The majority of eSports is played through platforms such as Twitch, YouTube and Mixer. These platforms allow people to stream their games and people can watch. Just like football, rugby and any other sport, you can watch the games live on various different media platforms. Now that people are at home, I know for a fact these streaming sites will be smashing it and people will want to stream more often. Obviously, international tournaments have been cancelled but that’s for the safety of the players and anyone involved which is the right thing to do. Esports already took off before the coronavirus I think now it will be even bigger as everyone will be hooked on to their gaming consoles.

SFME: Who are your favourite team and players on FIFA?

UM: This is quite a broad question! Over the years, I’ve played with different teams and each FIFA had different players who were fun to play with. I will give a list from FIFA 12 – FIFA 20

SFME: Which FIFA was your favourite version?

UM: My favourite FIFA had to be either FIFA 12 or FIFA 18. FIFA 12 was the most enjoyable to play and FIFA 18 was the one I was most successful year on in my gaming career.

SFME: What tips do you have for anybody that wants to become an eSports gamer?

UM: Just keep grinding on the game they are playing and start going to a few tournaments here and there to get that experience and over the next couple of months you will see how much better you are getting at the game. Keep challenging yourself as well, best thing to do is watch other streamers play and learn a few techniques they are doing and apply it to your game.