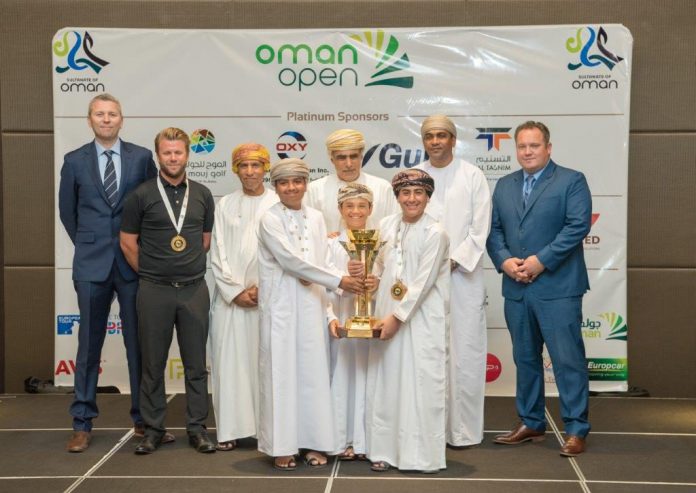 One of the Middle East’s most spectacular destinations will once again glow under the global spotlight when the 2019 Oman Open returns to the stunning Greg Norman-designed Al Mouj Golf in Muscat, from February 28th – March 3rd.

A star-studded line-up that includes defending champion Joost Luiten, as well as Ryder Cup star Chris Wood and Austrian hero Bernd Wiesberger, will converge on the beautiful Gulf of Oman coast to contest the USD$1.75 million European Tour event and the benefits that the prestigious tournament – Oman’s biggest professional sporting occasion – bring to the Sultanate are considerable.

Defending champion Luiten said: “I had a great time in Oman last year. The Al Mouj Golf course was stunning and a proper challenge for the players. It was a wonderful feeling to lift the inaugural trophy of the Oman Open and I am very excited to come back to the beautiful Sultanate of Oman to defend my title.”

Promoted by the Oman Golf Committee and Golf Oman, the economic impact of the event is estimated to be USD$26 million while a global television reach of 200 million in addition to exceptional international print and online coverage saw the inaugural Oman Open in 2018 generate a media value of USD$74 million as golf fans around the world were treated to stunning visuals of the Al Mouj Golf course in its picturesque coastal setting.

His Excellency Dr Mohammed bin Hamad Al Rumhy, Oman’s Minister of Oil and Gas, said: “The inaugural Oman Open was a great success. The exposure our country received through the international TV broadcast reached the right target groups of potential tourists and potential investors for the Sultanate. We believe the Oman Open 2019 under the organization of the Oman Golf Committee with the full focus on promoting the country will further strengthen the message to the world, that Oman is a beautiful destination for tourists and an attractive destination for investors.”

This year, Oman will be further promoted throughout the event with tee boxes around the golf course featuring giant backdrops showcasing the country’s most scenic and vibrant tourism and commerce hot-spots.

Golf courses and hotels in the Sultanate have report increased demand and requests from overseas guests since the first European Tour tournament in February 2018.

While the 2019 event marks only the second running of the Oman Open, Al Mouj Golf is no stranger to hosting professional golf tournaments having previously played host to the stars of the European Challenge Tour between 2013 and 2017. This year, in addition to a world-class golf course, which drew rave reviews from the European Tour’s elite players in 2018, the competitors will be welcomed at the brand-new Oman International Airport and will stay in the luxury of Official Hotel, the Kempinski Hotel Muscat which is also offering preferential rates to players who wish to arrive early to the Sultanate in order to practice for the tournament. The other golf clubs in Muscat including Ras Al Hamra, Muscat Hills and Ghala Golf Club have agreed to open their doors for the players to use their facilities free of charge.

Keith Pelley, CEO of the European Tour, said: “The European Tour is delighted to see the great development of golf in Oman since the first Challenge Tour event in 2013. The 2018 Oman Open has been a terrific tournament, praised by our players, who are eager to come back this year to the incredible Al Mouj Golf course and the amazing Sultanate of Oman. It is wonderful to see so many additional sponsors supporting the event. The players will love the new Official Hotel and will be very impressed by the new Muscat International Airport. The European Tour is committed to the Oman Open and we see great potential in the event for the years to come.”

Golf has a long history in Oman, but since the country began hosting international professional events the game has developed greatly at grassroots level with significant support coming through the Ministry of Sports and the Oman Golf Committee.

Sheikh Sa’ad bin Mohammed Al Mardhouf Al Sa’adi, Oman’s Minister of Sports Affairs, said: “The success of the national teams in all tournaments in which they participated, most recently in the GCC Championships where the under 15 team won the gold medal, shows us that golf in the Sultanate of Oman is in continuous development and awaits a promising future. We hope with great ambition to see our national golf team competing in the Oman Open in the future.

The event promises to be a wonderful social occasion for all the family with a host of fun activities and food and beverage outlets in the bustling Championship Village ensuring there will be plenty to do for golf lovers and non golf lovers alike.

“The Oman Open was a fantastic event last year. The Al Mouj Golf course was stunning and extremely well prepared; probably one of the best courses we played all year. I played well last year, but my good friend Joost Luiten had the better finish on that final day and was a deserved winner of the inaugural Oman Open. I’m looking forward to returning to Muscat this year and maybe I’ll come out on top this time. Al Mouj has invited the players to come and practice in Muscat prior to the event. I might do that and if I do so, I will take some time to see some of the stunning mountains and the Souk before the Oman Open starts.”

The Oman Open is supported by: