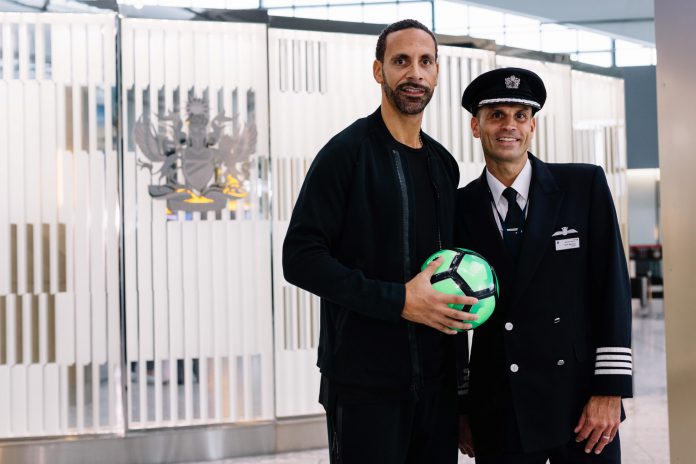 Former England international and Manchester United legend Rio Ferdinand has been showing off some of the football skills that saw him play in three FIFA World Cups and win six Premier League titles during his trip to Dubai.

Ferdinand, who helped launch the first-ever Dubai fitness challenge, an initiative by Sheikh Hamdan bin Mohammed bin Rashid Al Maktoum, Crown Prince of Dubai encouraging residents to do 30 minutes of exercise for 30 days, has also spent a week in the emirate training aspiring footballers at an exclusive training programme hosted by the Four Seasons Resort Dubai at Jumeirah Beach.

Ferdinand chatted with British Airways about the highlights of his Dubai trip, and urged others to follow the emirate’s lead with a city-wide fitness challenge.

“The Dubai Fitness Challenge was really fun and I was happy to be involved,” said Ferdinand. “Fitness is a way of life, you can’t just wake up and be fit. I train regularly, not just for fitness but for the mind too.

Prior to Ferdinand’s flight to Dubai, Rio and British Airways Captain Rick Basnett enjoyed a friendly kickabout outside British Airways’ First Wing at Terminal 5 in London Heathrow, with Ferdinand displaying some of the deft touches that saw the London-born centre-half earn 81 England caps.

“Your 30 minutes a day can be anywhere, as we showed in the airport. Just grab a ball, a group of friends and have a kickabout; even on your own, kick a ball against a wall, run along the beach with it. Anything, just get into the habit of being active and make it part of your routine.”

Ferdinand added: “Over the past week, I saw a city come together to encourage each other to adopt a healthier lifestyle. You don’t find such determination and leadership in many places and I’m keen to see more cities around the world, including us in London, challenge ourselves to stay fit and support each other.”

“When I fly I usually look forward to settling down and getting into a good action or thriller movie,” he said. “I’ve got into documentaries recently though and I really enjoyed I am Bolt! – the Usain Bolt documentary; he’s a massive Manchester United fan. Then I’ll most likely eat and have a snooze; I don’t think I’ve ever flown without sleeping, I always get my sleep in and put my cap over my face, hoody up and sleep.”

Ferdinand may be mixing a potential career as a pugilist with a growing reputation as a TV pundit, he hasn’t forgotten his football roots, adding: “One of the highlights of my career was the Champions League Final in Moscow where it came down to a penalty shootout and an exhilarating win for Manchester United…what a night!”

And the former footballer, who is currently in the early stages of training to be a professional boxer says Dubai could expect to see more of him in the future: “I fly a lot and Dubai is one of my favourite destinations – it is family-friendly and there’s loads of things to do to keep my kids active.”