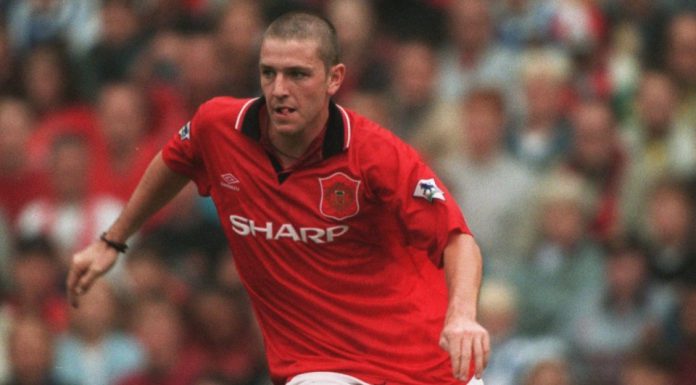 The much-loved DHL Swing Against Cancer Golf Series is set to return with a bang after a break for the summer when the DSA Open revisits Emirates Golf Club on September 13th and spearheading proceedings will be none other than former Man Utd star and famed joker, Lee Sharpe.

The one time ‘Red Devil’ is renowned on the after-dinner circuit for hilarious tales of his United days, when he was a frequent recipient of Sir Alex Ferguson’s infamous ‘hairdryer’ treatment despite being one of the most exciting talents in Fergie’s FA Cup and Premier League ‘double’ winning side of 1993-94. Sharpe, who also spent time at Leeds United, Bradford City and Portsmouth among other clubs in a storied career that also featured eight England caps, is delighted to be able to do his bit to fight back against one of the world’s deadliest diseases by supporting the DHL Swing Against Cancer Golf Series and official charity partner, Friends of Cancer Patients. Proceeds raised from the series, which last year raised US$100,000, will go directly to the treatment of three-year-old Mohammad Sameer Abdullah who was recently diagnosed with leukemia.

“I’ve worked with lots of cancer charities over the years and without doubt everyone in their life will know someone close who has suffered with the disease,” said Sharpe. “My dad had prostate cancer so it’s very close to my heart. If we can raise awareness and money that’s the best thing.” The 3-handicapper, who was known for colourful goal celebrations most notably the ‘Sharpie Shuffle’, is no stranger to Dubai and its multitude of world-class golf courses. “I lived there for a few months working with a TV network and I love the golf in Dubai,” he said.

As well as taking part in the golf day on the iconic Majlis course, home to the Omega Dubai Desert Classic which has seen the likes of Seve Ballesteros and Tiger Woods grace its fairways over the years, Sharpe will be entertaining guests at a gala event in the evening with a Q&A about his footballing days in which he promises: “Great stories and total honesty about the best club in the land and the best and hardest manager the world has probably ever seen.” Steve Kelshaw, Managing Director of title sponsors, DSA, is thrilled at the prospect of the return of the DSA Open, which raised the bar for all subsequent Swing Against Cancer events in its inaugural edition last year.

“DSA are delighted to be involved in supporting the Swing Against Cancer Golf Series for the second year running,” he said. “Last year, the response from our friends and colleagues was amazing and we are looking to once again help people in need and support those blighted by this disease. “We are also thrilled that Lee has very kindly offered his full support for the event. He is a great guy, his after dinner speaking is without doubt not to be missed and he will be a great asset in making the day a huge success for all involved.”

And what about that famous ‘Sharpie Shuffle’? Can we expect to see it get an airing when the pars role in on the Majlis in September? “I’m a bit old but the brain says I can still do it…but only for birdie,” laughs Sharpe.

To register for this fantastic event click here: https://tinyurl.com/y96ybj5w