Home Features How MotoGP will survive in the new world 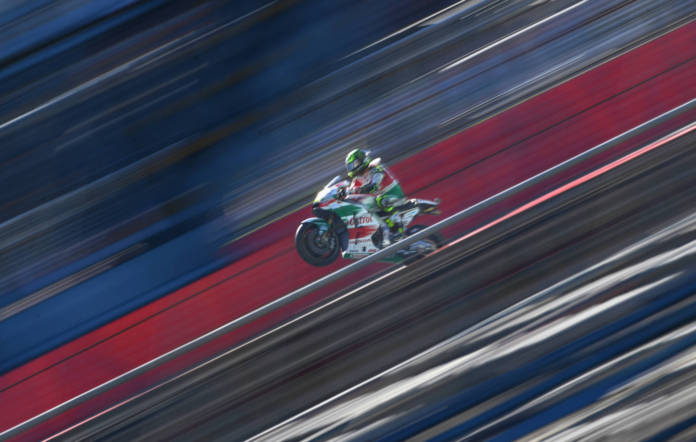 The two-wheeled motorsport powerhouse MotoGP is back ‘behind closed doors’ in a fortnight following hot on the trail of Formula 1. A new calendar was announced by promoter Dorna Sports in June, comprising 13 European Grands Prix in 18 weekends, with four non-European races to be confirmed at the end of July. It’s an ambitious return and like other major global racing series the teams, riders, mechanics, engineers, rights holders, broadcast crews and operational staff will need to navigate through complex logistical and financial conundrums, not to mention bio-security.

Basing the championship in continental Europe reduces logistical issues by allowing the skeleton teams and staff to travel by road, according to regional health protocols. The transportation of bikes and equipment, and ready supply of crash parts and bodywork, will be more of a challenge under the current circumstances.

The financial implications for promoter Dorna and the teams will be significant. Dorna’s owner – Bridgepoint – has offered financial assistance to all satellite MotoGP teams to help pay staff wages during the hiatus, with several races missed and no exposure yet for sponsors to fulfil contractual obligations, or a guarantee of the extra rounds outside Europe. There will be a loss of revenue from promoters and broadcasters, possibly also some sponsors and partners unless 16 races are confirmed, which in the oncoming recession will massively challenge the sport.

Over and above an inevitable slump in finances, health checks will need to be in place in the paddock, as with all other behind-closed-doors sports. All MotoGP riders, teams and staff will need to have a negative virus test before travelling to events. Daily temperature checks and most likely precautions like hand washing stations, PPE, recycling points, extra signage, queuing systems and other new checks will all need factoring in. The riders will need to show extra caution to ensure they can cope with the new calendar injury-free, as well as dealing with later winter races in France and Spain.

But the premier class of motorcycle racing has weathered many storms since its inaugural race in 1949 and to this day it remains a stalwart of motorsport.

According to figures sourced by Nielsen Sports, MotoGP has consistently endured as the second most popular motorsports series after F1, with an annual live TV audience of circa 180m, and a cumulative annual audience of circa 390m. MotoGP and F1 have worked closely for many years in formulating mutually beneficial calendars and MotoGP’s stable calendar over the past decade has been a key part of its success.

According to Dorna, TV coverage reaches 427 million homes in 207 countries. The sport’s profile has steadily grown thanks to high-quality broadcasting, more factory bikes on the grid capable of winning, and thrillingly close racing at speeds exceeding 220mph. Its revenues are well behind those of F1 but certainly comparable with Formula E, and although MotoGP’s price points for sponsorships are significantly lower than F1, the costs to go racing are also lower than those of its main rivals.

Its biggest markets are regions where motorcycles and scooters are most popular; Italy, Spain and South East Asia, which is also reflected by some of the sport’s biggest sponsors, Spanish oil company Repsol and Malaysian oil giant Petronas. The energy drink sector is another major source of investment, with Monster Energy running title race sponsorships, and Red Bull having just extended its race title sponsorship commitments.

There is no major competitor championship in the bike space, and they have benefitted from the sustained involvement of all the major bike manufacturing companies including Yamaha, Honda, Suzuki, Ducati, KTM and Aprilia.

The championship had planned to expand to 22 rounds per season over the next few years. Whether that’s still achievable in the face of second wave Covid lockdowns, the potential loss of revenue from promoters and fans, and the likely recession, remains to be seen.

In the short-term the series needs to get the fans back as quickly as circumstances will allow, continuing cost-savings like sticking with the same bikes for 2021 and reduced teams running at minimal capacity with non-essential staff or hospitality areas. Longer-term it will need to look at developing cost-cutting regulations while not compromising on machinery or technology. The sport will need to continue to evolve how it engages with fans, something which by and large they have been very successful at.

The basic racing product is excellent and if MotoGP can unearth another Valentino Rossi it will continue to appeal to a younger audience of very avid bike owning race fans. There’s currently a boom of fans in South East Asia, where in Indonesia alone more than six million units of motorcycle and scooters are sold each year.

The sport will also need to work hard to address sustainability issues moving forward (like F1 and other automotive based sports who can offer a platform for tech brands to innovate and showcase developments in this same vein), especially in the post Covid-19 world. Last year MotoGP launched an electrically powered series, MotoE, the championship’s first foray into reducing its carbon footprint. The series is getting fans used to the idea of electric bike racing but it’s unlikely they will replace MotoGP’s four-stroke engines any time soon.

MotoGP is intrinsically geared for survival and the new season is set to be as good as any in terms of the TV viewing experience. The sport’s on-track action is so compelling that a lack of fan attendance won’t be noticed by the armchair enthusiasts – I for one can’t wait for its return.