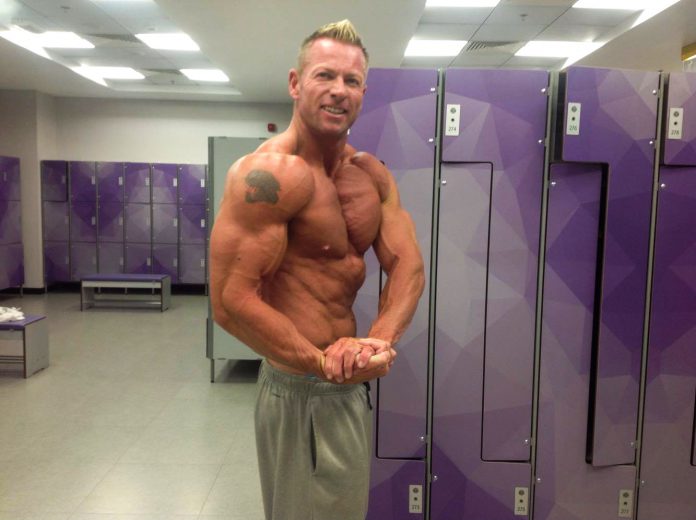 Fraser Mclaughlan’s lifestyle is not what you’d expect from a bodybuilder. He spends his days teaching golf at Al Ain Equestrian, Shooting & Golf Club but his passion for fitness is indisputable. Ever since he gave up on the dream of being a tour golf pro, he’s been dedicating his spare tme to sculpting and developing his body with remarkable results. Fraser has recently taken part in the Universal Muscle and Fitness Middle East Natural Bodybuilding Competition 2016 and SFME’s Scott Grayston met up with the towering Scotsman to find out: how he performed, his bodybuilding secrets and how health and fitness became such an integral part of his life.

SFME: How did the Bodybuilding competition go Fraser?

Fraser Mclaughlan: I loved the whole experience so I would definitely recommend it to anyone. I had entered the category of Men’s Masters Physique, which is for competitors aged 35-40. When I arrived there was not enough entrants in this age range so I ended up in the younger group. I finished fourt from eight competitors but all in all it was a great day. I had about 20 people in the crowd from Al Ain cheering me on so that made the day one I will never forget.

SFME: How long were you preparing for the competition?

FM: I put the event in my diary about six months prior to the event date. From that point I started measuring my food and calories but I only started lowering my calories about 10 weeks before the show.

SFME: What did you cut your weight down to  for the show and what was your starting weight?

FM: I had been training six days per week and eating pretty clean for two or three years now so my weight didn’t actually drop too dramatically. I would say I went from about 105kgs to 95kgs in the duration of my 10-week prep. Five of these kilos were in the 24 hours prior to the show due to water reduction.

SFME: How has your body changed over the years?

FM: When I was 17 years old, I was sickly thin. I was 6’ 5” and under 60kg. When I went to college at Texas A and M in 1996 on a golf scholarship my coach instantly put me on a weights programme to beef me up a bit. Ever since then I have been hooked on the fitness lifestyle. Every year my body weight went up till I was about 27 then it kind of stuck. I would lift more weights and spend more time in the gym but still I stayed where I was until I was about 33 years old and living in Abu Dhabi. It was at this point I met a guy called Shady Eid. He was an ex bodybuilder turned Fitness And Nutrition Coach. Shady taught me the importance in measuring foods, looking at labels, when to eat and when to train. In the next three years my body changed dramatically. I had gained weight and lost a considerable amount of body fat. My training had been tweaked a little bit but to be honest the changes had been 95% in my diet. I would eat less at night – lower fats, higher proteins and I started eating carbohydrate only before and after I trained.

SFME: Has bodybuilding always been a passion of yours?

FM: Long before I had ever set foot in a gym I was fascinated by men with muscular physiques like (Sylvester) Stallone and (Arnold) Schwarzenegger. At the time the career I was perusing did not give me the time to train or, more importantly, eat enough. I had been chasing the dream of being a tournament golf professional since I left college till my late 20s. At this point I gave up the dream of playing on Tour and started teaching golf for a living. At first this was a really rough transition and I felt as if I had failed myself in some way. After a time I really took to coaching and seeing others improve turned out to be much more fulfilling than I ever thought it could be. Not long after this is when I went looking for help from Shady. It was like a new lease of life to me. I didn’t have to play golf to earn money any more. I could do it for fun. I now had the time to train properly and, more importantly, the resources and time to eat properly.

SFME: How did it effect your routine of being a golf teaching professional?

FM: I would say the biggest effect bodybuilding has had on my life is my productivity. With the exception of the two or three weeks leading up to the show, I was on point with almost everything I have done. On busy days I could easily take 20 x 30 minute lessons plus my office work, not including up to three gym sessions. My energy levels were high and I was sleeping less than five hours per night. In the four months leading up to the show I had almost no sugar, limited salt and zero alcohol. My body was rid of all toxins and it was rewarding me for it.

SFME: Did getting into shape actually improve your golf performances?

FM: To be completely honest there were certain things I simply could not fit into my daily routine. As Golf takes such a long time to play this was unfortunately one of the things that had to go on the sidelines.

FM: I have always enjoyed lifting weights as I feel it is a productive way to get rid of negative energy. I would say my favourite part of preparation for the show would have to be my morning cardio. I used to hate cardio as I’m a bit clumsy because of my height and I always seemed to injure myself when I ran. This time around I swapped running for walking. For 12 weeks I would get up at 4:30am and walk for 45 minutes with my wife, Gillian, then sit and have a nice breakfast. We both have very busy working weeks so we felt like we stole an extra hour or two each morning, which was really great.

SFME: How would a normal week pan out for you in terms of exercise and diet leading up to the event?

FM: Pretty simple: I would walk in the morning then I would do my weight training from 2-3:15pm. I would do this for six days per week and have a complete rest on a Friday. Occasionally I would throw in 30 minute blast sessions in the gym if I had a couple of appointments at work cancel and sometimes I would throw in an extra 30 minute walk before bed. From the weight training perspective, I would hit every upper body part only one time per week and legs twice.

SFME: What was the most difficult thing you struggled with when trying to transform your figure for the event?

FM: The physical part all went pretty smoothly to be honest. My main struggle was how to show my body properly. I am quite a big, awkward guy and the ‘Physique’ category is a lot to do with performance. I’m the kind of guy who would step on your toes on the dance floor! I actually went for some help with posing coach Jakub Dvoracek. Jakub is the drug free world champion in ‘Men’s Physique’ but even he couldn’t knock all of the rigidness out of me. Jakub was extremely patient with me and on the day I may not have looked as fluent as some of the younger guys but I looked a million times more comfortable than I ever thought I would. I have Jakub to thank for that.

SFME: What are your future plans? Do you intend to compete again? What would you do differently?

FM: Yes, for sure I am going to try and compete again but I am going to try a different category. At the moment I am six weeks into what is called a bulking phase. This means I have increase my daily calories in order to get bigger. My aim is to get my legs bigger and enter the ‘Classic Bodybuilding’ category in May next year. I want to do the UKBFF Show in my hometown of Glasgow and possibly another one here in the UAE around the same time. There is less of a performance in bodybuilding, which I think may be more suited to me. I now have 10 months to find the body I need to stand up there and win a medal this time. Wish me luck!