Home Features DAFL Chairman Dean O’Grady on what the future holds for the Dubai...

The football season has come to a standstill in Dubai like the rest of the world due to COVID-19 which is a huge shame because the Premiership of the Dubai Amateur Football League is one of the closest in its history. The DAFL has been running for 15 years and is the most iconic and longest-running league in the city with superstars such as Christian Wilhelmsson competing at this high amateur level. There are four divisions, a Veterans league and a Sevens league but without any semi-professional football in the Emirate, the standard is supreme. In this feature, SFME’s Scott Grayston picks the DAFL League Chairman, Dean O’ Grady’s, brains about how he sees the rest of the season going, what we can expect in the future from the leagues and a number of other DAFL-related areas including what additions have worked successfully for them this season.

SFME: How do you see the season panning out? Do you think the leagues will be finished over the summer?

Dean O’Grady: At the moment, that is the proverbial ‘how long is a piece of string’ question. Do we want to finish the season? Absolutely.

Will it be possible or practical to? At the current time whilst we are in a period of restricted movement throughout the UAE, let alone being able to play any kind of sport, the odds aren’t looking great.

However, things can change quickly. As always, we are in constant contact with the authorities and venues. If there is an opportunity to play, the authorities allow it, and we feel it is safe for people to do so, then so long as the teams want to play, then we will arrange games.

For how long that philosophy will remain practical, as the weather gets warmer, and people leave the UAE for the summer, we will have to wait and see.

SFME: The introduction of linemen this season has helped improve the league’s professionalism. Do you agree?

DG: Linesman have been a welcome addition to the Premiership. But for them to be effective we have to ensure that they are of a consistent quality. As with anything new, there has been a learning process with implementation. With the benefit of that experience we will be taking that forward to ensure we have the best quality possible for next season. 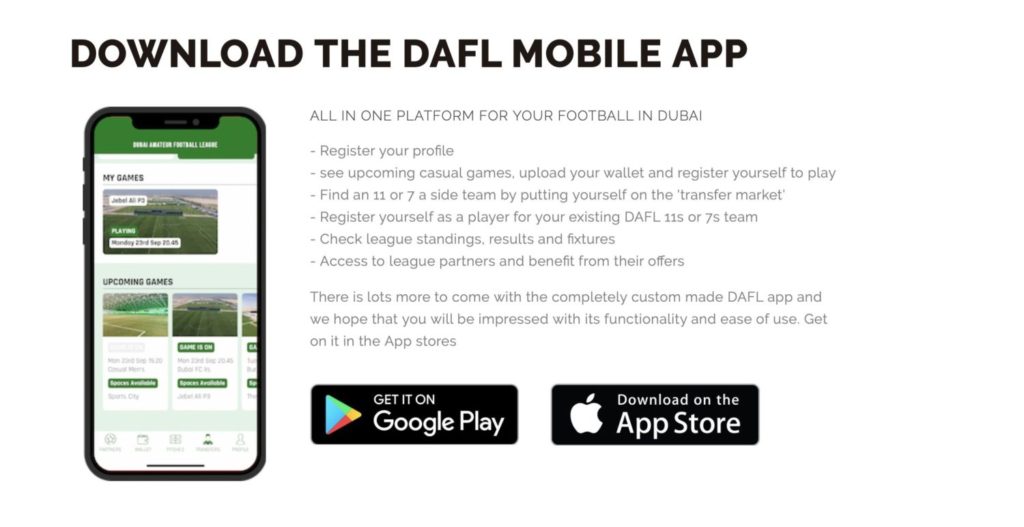 SFME: The new DAFL app is looking great and the introduction of the video camera recording the highlights is a real coup. Is this just a feature for the Sevens? Have you been happy with it all?

DG: The new DAFL app is still a work in progress. Work started on it just over a year ago (in February 2019) and we have come a long way in terms of functionality in this time.

There is continual development still taking place on the app, and there is already increased app functionality in place for next season, with more planned. We have already had a significant level of interest from outside of Dubai for further use cases and scalable applications of the app, which is a testament to both the work that has been put into it, and the appreciation of the relatively unique functionality.

As the DAFL app has been specifically been built for DAFL, it doesn’t suffer from compromises that typically affect other apps which are used for running football leagues, as virtually all alternative apps currently available have invariably been developed generically for a multitude of different sports.

Video is something we have been playing with for the last 12 months, and experimenting with various formats whilst a long term decision is being made for the correct way forward.

We have made a significant investment into owning video equipment, recording league games at Jebel Ali COE and The Sevens, 7 a side league games at Dubai Heights and Miracle Gardens, and casual games at a number of venues.

Investment and development in video is ongoing and we will make a decision over the summer for the video strategy for the 2020-21 season. The ultimate goal would be to video everything. But that requires a considerable budget and a long-term commitment. We don’t feel that it is something that can be done half-heartedly. 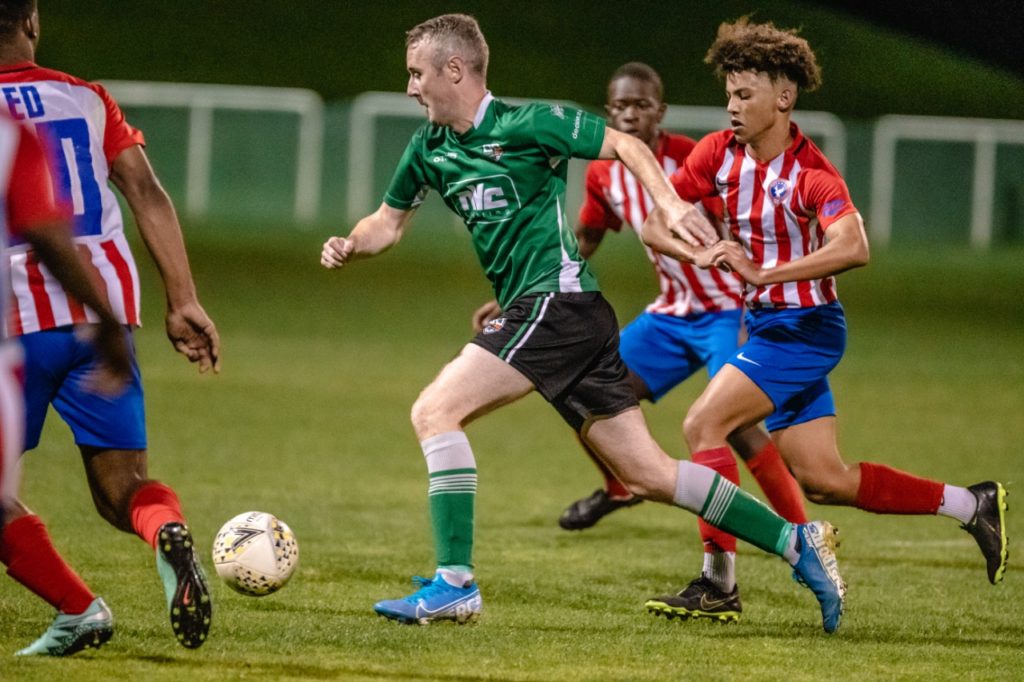 SFME: Has it made it easier to run the league and keep everything organised with the app?

DG: Being able to develop functionality to do things exactly the way you want to do them, without doubt makes things easier. But this first year, whilst we have been effectively building the app around the league as it operates, has been challenging. With the vast majority of functionality now in place, next season onwards will be plain sailing in comparison, and we can then work on small tweaks, and fine tuning everything to completely remove elements that slow the organisation down.

SFME: Players going onto the transfer market seems to have worked well? Has there been any random sides put together through that? If so, how have they got on?

DG: Until this season, transfer market was always something that went on ‘behind the scenes’. Players would be given to teams on an ‘as needed’ basis, but there was little transparency.

By having a transfer list that is completely ‘open’, for all teams to see, is just another example of trying to ensure that every team sees that they have the same opportunities as all others. The perception of bias will always exist in some people’s minds. All we can do is remove opaqueness and provide transparency in every element possible.

We were short of teams in League 2 this season, and we managed to get a couple of people prepared to manage an extra team. Therefore, we encouraged players from both the transfer list and our regular casual games to get involved, forming ‘Scorpions’. It worked well, thank to the dedication of the manager gelling players together, and they have given a good account of themselves in the division. 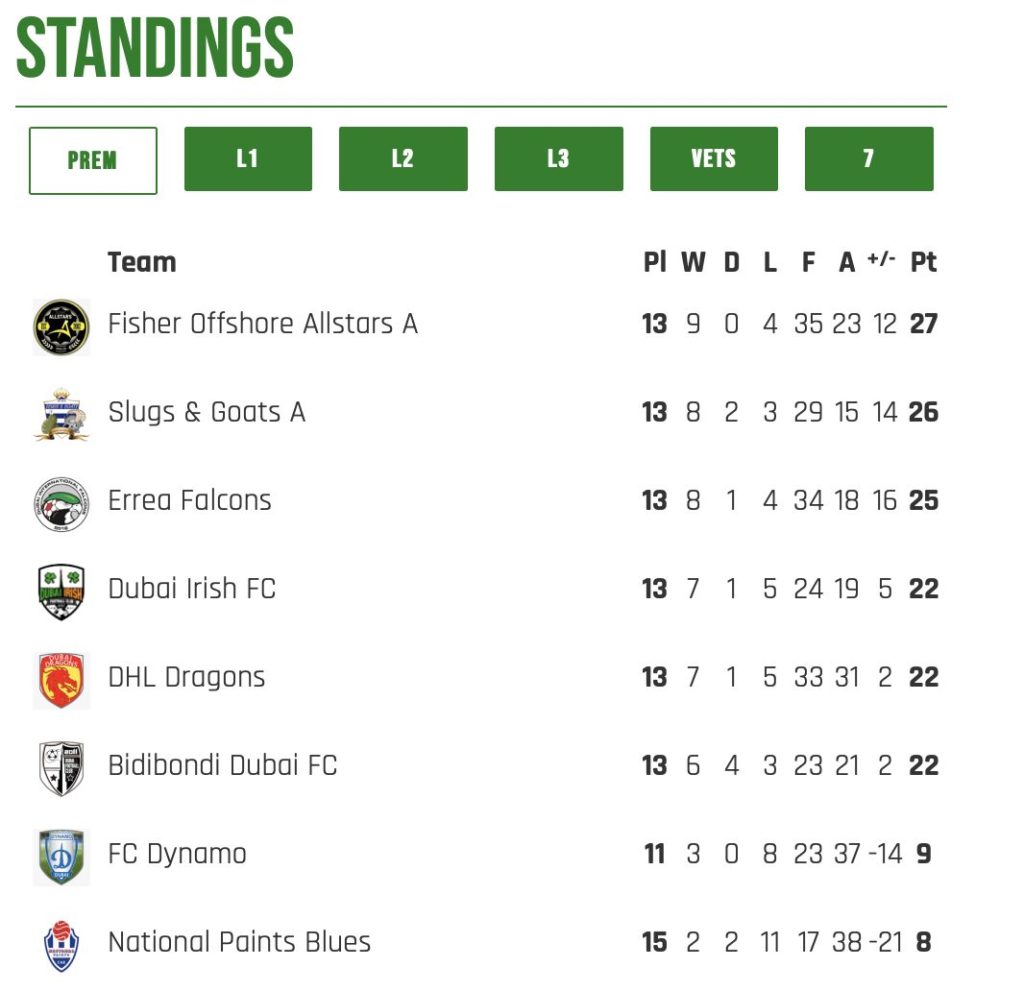 SFME: How do you see the Premiership finishing? It’s maybe the tightest we’ve ever seen between a number of teams.

DG: It will be a massive disappointment if it proves that we are unable to get the Premiership completed, just as it will be for all our other four divisions.

For the Premiership, for 6 teams to still have a chance to win it coming into the final third is unique. It hasn’t happened in the last 15 years that I have been involved.

But in other divisions, we have Allstars Vets a point away from winning the Vets League, four or five teams in with a shout of the League 1 title, Slugs & Goats B and Dubai FC B within inches of each other for the League 2 title, and Irish Harps close to clinching the League 3 title. There will be a lot of disappointed teams throughout the divisions, irrespective of their current league position, should it prove that the season is already over.

SFME: You’ve been involved in the DAFL for 15 years now, what have been the major changes you’ve noticed in the local football scene over here from when you first came

DG: The main change I would say over the years is the push for quality. People want to play at the best facilities, they want the best organisation, referees, linesman, app, etc.

The challenge in constantly matching that requirement is cost. The league has always ran on the basis that it could survive without sponsors, which, when we consider the era of uncertainty that we find ourselves in, is essential.

I’ve seen too many events in and outside of sport that aren’t sustainable without sponsorship or outside funding, and you cannot operate something like the DAFL long term if you are interdependent upon outside financial elements which are ultimately out of your control.

When I look at what the league provides, I think we do a good job. But we are always looking to do more. You don’t get better by standing still.

SFME: Everybody’s putting together the best team they’ve played with etc, who are the best players to have played in the DAFL? I could name some big names like Eric Abidal, Mikael Silvestre, Nicholas Anelka, David May, Michel Salgado, Ian Selley… Can you finish it?

I wouldn’t like to name individuals, as it would do a disservice to any that I forgot!

Over the years we have had (and we still do have) some great players. Not only those ‘names’ that have played at the highest levels of the game internationally, but a good number of fantastic lower league and non-league players, that for some reason never made it to the higher echelons of the game.

While it is nice to have some grandiose and historically important players from the game involved with the league at various points in time, for me – my pleasure is in seeing people of varying standards, abilities, and age ranges, participating for the love of the game, win or lose.

I have as much respect for the player that turns out every week for a bottom of the league side, as for those that participate in the highest level of the DAFL.

SFME: Any changes in mind for next season?

DG: We continue with the never-ending pursuit of quality. We want to make everything is the best it can be. From the Premiership to League 3. To the Vets League. To our 7 a side league. To our casual games.

We want to provide the best amateur football experience for whoever wants to play, at whatever level they want to play at.

You can find out more information about the Dubai Amateur Football League on https://www.dubaifootball.com or download the new app ‘DAFL 19/20’.