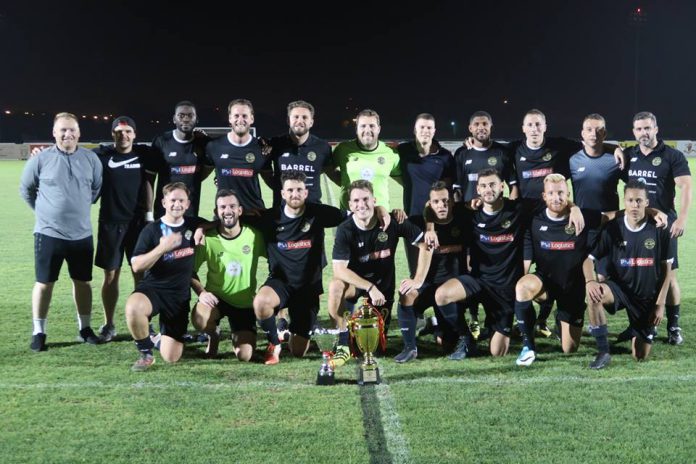 Congratulations on winning the cup for the second year in a row. Was the season a success or a heartbreak not lifting the league title when coming so close?

Colin Reilly – What we have is a little bit of redemption by lifting the cup. The league was the goal so in fairness. the season is a failure for us as a team. That was the difference going into the game last week, if Slugs lost it would have been considered a great season but with Allstars losing it’s a failure. This is football, you reflect, react and move on. After last week’s result our boys are a credit to themselves to lift their heads and show resilience and character to go on and win the cup over a very good Falcons side after last week’s loss to the Slugs.

How did you celebrate winning the cup?

CR & Mark Williams –  We are planning a night out at the end of the month with just the First Team players and managers but we did go for a beer or two after the game.

You’ve been involved in the league for a number of years now with Safa and Allstars, how has it changed from when you first started and how do you compare the standard to back in the UK?

MW – The standard is definitely improving year on year. There are now ex pros playing and players that would play a good semi pro level should they return to the UK.

Will you still be involved with the Allstars next season?

CR – I will continue and be supported with Andy Anderson next season. Andy started as part of the management team this season but was involved in an altercation before Christmas which led to a prolonged suspension from the league.

MW –  I won’t be managing a team as I want to spend more time with my family. That said I will still remain on the committee and at 42 have still not put my boots in the bin so who knows!

Who have been the standout players this year for your team?

CR –  I would struggle to say we have had anyone who has really stood out. As a team we have performed well but in the end, we have underachieved. Our skipper Dan Jacobs always performs well and finished the season on 20 goals, as a winger at any level that’s very impressive! A huge character and player in the team is Jamie King, throughout the season we played him out of his comfort zone higher up the park and to his credit he has taken it in his stride and adapted very well scoring 12 goals. For me he has been our most improved player this season, he has matured a lot and shown great character throughout the campaign.

What has been your highlight of the season?

MW – My highlight is seeing the club continue to develop. We have 130 players registered playing for 1s, 2s, 3s, 4,s and Vets and we also have a social team on a Saturday that play in the EFA.

CR – Highlight for me was not losing to any of the Irish sides throughout the season, we set our stall out last year as one of the main objectives. Last season the 1s dropped 10 points to Irish and this year the 1s have only dropped 2, although on the flipside of that, we have dropped points elsewhere. However, we have a small sense of achievement overturning that dominance Irish held over us.

Can you share the funniest thing that has happened to your side or one of the players this campaign?

CR-  Funniest is most probably Akpo Sodje turning up to Jebel Ali for a match when the match was at Sports City. Every week the boys have a laugh on the group chat mentioning the meeting place wrongly on the lead up to the meet time. On this occasion Karma bit us as Akpo fell for it when sitting in the changing room at Jebel Ali. Fair to say he calls before every match now!

What areas of the team do you think need to improve to lift the title next season?

CR – We have to be mentally tougher next season, the games where we have lost games or drawn, we have dominated play and been forceful/wasteful. We will recruit and already have a few irons in the fire that will definitely make us even stronger. Our work started on Thursday morning after the game with the Slugs to conclude the league campaign. 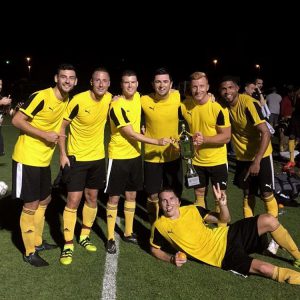 Were you surprised the Irish didn’t do better this year?

MW –  The Irish have been the most dominant team in Dubai for many years so it was going to happen at some point. I am in no doubt they will be back on track in 18/19!

CR – Lenny has been brought up on the streets, we are very similar in our characters, and he won’t go down without a fight, be rest assured they will be very strong next season and a few cards will be marked!

Christian Wilhelmson plays for the Allstars and he has 79 caps for Sweden, what’s he been like on and off the pitch?

CR – Christian has been fantastic, his attitude and commitment has been incredible and he is a true gentleman. Some of the skill he has performed during the season is just unthinkable. It has been a pleasure to manage not only Christian but Mirel Radoi also who has 68 caps for Romania, he is an absolute credit to himself and his profession. I have been around pro footballers a lot in my life but I have never seen a better pro than Mirel, all our lads will tell you the same. After training he is running collecting cones, pushing goals back in place and collecting balls. He has been outstanding when available, again very committed and never missed training when he was in the country.

Did you ever believe the Slugs would win the title at the start of the season?

MW- In all honesty no, but their team have some quality players and have a togetherness that is evident from both games I have been involved in. Sadly the last one didn’t work out as planned for Allstars.

CR – In pre-season it was evident Slugs had strengthened, but the lad Conor Doyle is fantastic and made an incredible impact. Credit where it’s due, not drawing any games and being ultra-consistent has won them the league.

Which teams do you think you’ll need to look out for next year? Teams like The Falcons finished off very impressively so they must be a threat.

MW – Falcons, Irish, Slugs and National Paints (Blues) who were winners of League 1.

If nobody has ever played the team before, what can they expect when they face the team?

CR-  They will be expected to defend, we naturally are a very positive team and play attacking football. We do like to play football the correct way and build through the phases but we also know we can be very direct when we have lads like Dean Allgood in the team who is the most genuine and honest player I’ve ever seen. Leaves nothing on the pitch and was awarded with a brace in the cup final victory.

If anyone wants to join the Allstars or follow the team, how can they get involved and when will pre-season start?

They can get in contact via our FB page for details on trials and dates.