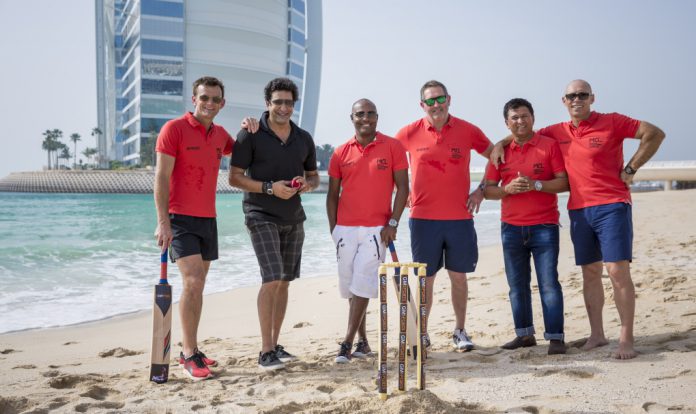 The T20 bandwagon is all set to roll into the UAE once again with some of cricket’s greatest former international players featuring in a new and unique T20 tournament which will be held annually across three stadiums in the country.
Wasim Akram, Jacques Kallis, Brian Lara and Adam Gilchrist are just some of the big names who will take to the field when the inaugural season gets underway early next February.
The MCL is the brainchild of Zafar Shah, the Chairman of GM Sports who are the official organisers and rights owner of the tournament.
Speaking at the launch of the league at the Burj al Arab in Dubai, Shah commented: “As with many other popular sports, there is a real desire amongst fans and cricketers to see some of the game’s retired icons back in serious competition. The MCL will be a unique and competitive annual T20 tournament offering exactly that. It will allow fans to consistently watch quality and entertaining cricket involving some of the legends of the game.
“The UAE is an ideal location for this unique tournament: it’s easy to access from anywhere in the world; it has a large fan base already living in the country; and it has three fantastic international stadiums to host the matches. We hope that by holding the tournament in the UAE it might also inspire a new generation of Emiratis to take up the great game, leaving a lasting legacy in the country.”

The matches will be played at the Dubai International Cricket Stadium, Abu Dhabi’s Sheikh Zayed Cricket Stadium and Sharjah Cricket Stadium, which have all previously hosted major cricket tournaments, including the IPL, as well as first class and international Test matches.
West Indian batting legend Brian Lara, one of the iconic retired players who has signed up to join the MCL, said he was ‘thrilled’ to be part of the league and felt the UAE was the ideal location for such an initiative.

We hope that by holding the tournament in the UAE it might also inspire a new generation of Emiratis to take up the great game, leaving a lasting legacy in the country.
Zafar Shah

“The UAE is a great location for a tournament like this to be based, with a big fan base in the country. I hope people get behind the MCL and support some of the heroes of the game as they look to extend their careers a little longer.
“The MCL is a tremendous force for good, which is partly what attracted me to it. The organisers have ensured giving back is a major theme, alongside inspiring cricket in the Middle East and in terms of leaving a lasting legacy.”
The league will feature a franchise format but unlike the Indian Premier League and Australia’s Big Bash League, teams will not be based on geographic location but will instead be made up of the best possible players a franchise owner can put together from the qualifying pool of players.
The tournament will be made up of six teams in its first year, with a total of 90 players taking part. Squads will be made of 15 members and all players must be retired from international cricket.
The MCL has been approved for an initial 10-year period by the Emirates Cricket Board (ECB), while GM Sports, is also closely following the established guidelines set out by game’s governing body, the International Cricket Council (ICC).
Former England captain Graham Gooch and past Australian captain Allan Border, are both members of the MCL governing council and will closely oversee the development of the league.

There aren’t many rivalries in world sport that capture the imagination quite like The Ashes.
Since its inception in 1882, the epic five Test match battle between the proud nations of Australia and England has epitomised everything great about the sport – from the unbearable pain of defeat and the sweetness of victory to the virtues of sportsmanship and the fruits of persistence.

With The Ashes set to be played in England in July and August, SFME’s Mohamed Suleman spoke exclusively with former England captain Graham Gooch and past Australian captain Allan Border to hear all about their Ashes experiences and find out what they think is going to happen when England and Australia lock horns this summer.

What did the Ashes mean to you as a player?
Ashes cricket is the pinnacle for any English or Australian cricket player because it’s not just about the cricket, it’s about the cultural history of the two countries. The cultural shared history between England and Australia makes for a very unique rivalry.
I had mixed experiences in my Ashes career. I played in a side that won The Ashes three times and I played in plenty of sides that lost The Ashes, especially in the latter part of my career when I was captain we never got the best of Allan Border’s team – they were too good for us!

“The cultural shared history between England and Australia makes for a very unique rivalry. “

What do you think is going to happen this summer?
No doubt Australia will be heavy favourites. However, I think England will be a little bit more confident after the New Zealand series at home which they tied 1-1.
They played good aggressive cricket and I felt they played in the right spirit. It was good to see Alastair Cook back to his top form which is necessary if England are to do well in The Ashes. However they need a couple of players like Ian Bell and Gary Balance to fire but overall they have a fairly settled side.
England look good but Australia will be favourites because they have the dominance at the moment. They have a very fine fast-bowling attack with Ryan Harris, Mitchell Starc and Mitchell Johnson.
However I think England will be quietly confident that they can cause an upset.

What did the Ashes mean to you as a player?
To play in The Ashes is a dream come true for all Australian cricketers and I’m sure it’s the same for the England boys. From the time you start playing the game, Ashes cricket is the foremost thing in your thoughts and it’s something you dream about.
When you walk out there to play your very first Ashes Test match it’s a spine-tingling sort of moment – it’s very special.

“When you walk out there to play your very first Ashes Test match it’s a spine-tingling sort of moment – it’s very special.”

What do you think is going to happen this summer?
I think it will be a lot closer than Glen McGrath’s traditional 5-0 prediction! England in their own backyard are always tough customers and we know that Australia have lost their last three Ashes series in England.
I always get a bit cringe-worthy when we’re given such hot favouritism before a series starts. Yes we beat England 5-0 in Australia in the last Ashes series but that’s in our conditions, our own backyard.
Our strike bowling is the key weapon that we’ve got with Johnson, Starc and Harris. Harris especially I think will do very well in English conditions – he’s a very Terry Alderman kind of performer and I’m backing him to have a great series.
So England will be a very worthy opponent and they lift themselves for The Ashes too so I think it’s going to be a really tight series and it’ll be great to watch.