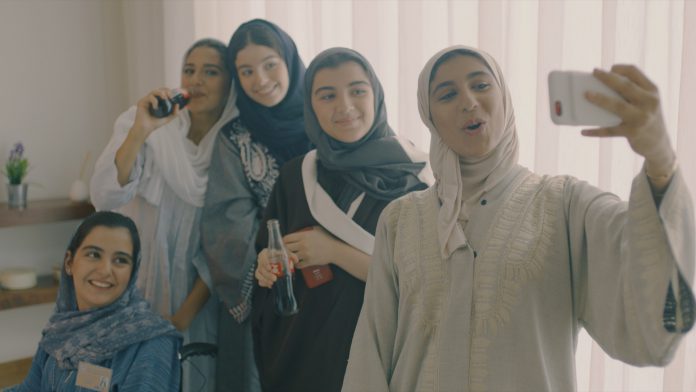 On 14th of June, as 300 million watch around the world, six extraordinary young girls  will become the very first all-female Saudi delegation to lead their national team out at the tournament as the Green Falcons take on Russia in the opening game. The girls have been appointed as part of the Coca-Cola Flagbearers Program.

The six girls chosen to represent the Kingdom are ambitious, brave, and exemplary in their chosen fields and fully represent the values and character of the youth of Saudi Arabia today. Aged between 13 and 17 years old, they have already accomplished much in their lives.

Their ambition drives them to play an active role in the changes happening in Saudi Arabia and will undoubtedly inspire their fellow peers to follow in their footsteps. Their individual successes are proof that through the support of family and the community, and the power of inclusion and equal opportunity, young Saudis have the full potential to contribute to the bright future of the Kingdom.

The campaign is part of Coca-Cola’s continued efforts to recognize and celebrate the positive changes sweeping the region. Late last year, the brand was one of the first to acknowledge King Salman’s royal decree allowing women to drive in Saudi Arabia by releasing the ‘Change Has a Taste’ campaign. This effort to shine a light on the bright young women of Saudi Arabia is part of the brand’s commitment to its long-standing belief in positivity and the uplifting power of positive change.

Expressing his excitement and pride ahead of the new campaign, Murat Ozgel, General Manager, The Coca-Cola Company Middle East said: “The-Coca Cola Company is a long-standing global partner of the FIFA World Cup and as such has the exclusive rights to the flag bearers program. We are delighted to support the changes that are happening in Saudi Arabia and spread the message of inclusion, diversity and support by championing these Saudi girls who are role models for the future generation of the Kingdom.”

In advance of the highly anticipated game, Coca-Cola will showcase the stories of these extraordinary girls to the world through a series of online films.