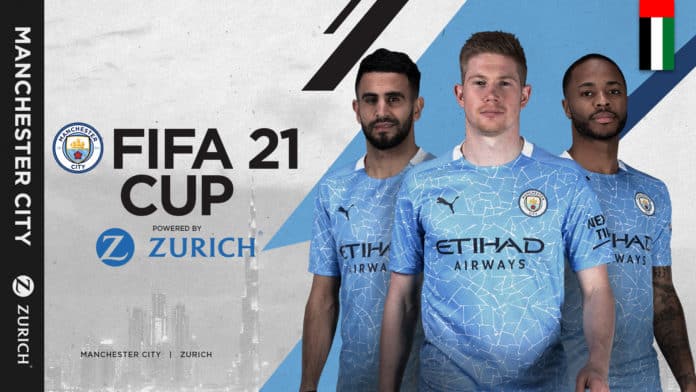 Zurich International Life Limited (Zurich) and Premier League Champions Manchester City have today announced the launch of the Zurich FIFA 21 Cup, an e-sports tournament calling on football fans and gamers in the UAE to get involved for a chance to be crowned the region’s ultimate e-sports champ with cash prizes and more.

Providing fans in the region with an opportunity to engage with the Club during the off-season, thePS4 online tournament aims to generate a healthy competitive spirit amongst sports fans and keep participants mentally active and entertained during the scorching UAE summer.

The tournament will be an extension of Zurich’s existing partnership with Manchester City which has included engagement with the local Manchester City Football Academy, building on the brand’s commitment to engaging and nurturing young talent and encouraging an active, healthy lifestyle, making smart choices and taking optimistic action to be ready for life.

The qualifying rounds will begin on Friday 30 July, with the group stages taking place on 13-14 August and the grand finals over 20-21 August 2021. The latter stages of the competition will also be broadcast live on the Club’s official Facebook channel.

There’s a host of exciting rewards to be won including a $2,400 prize pool divided between the top sixteen players, and percussive therapy devices from Therabody to improve preparation, recovery, and performance.

Manchester City’s professional FIFA player and current ePremier League Champion, Shellzz said, “It’s fantastic to hear that Manchester City and Zurich are working together to bring the Zurich FIFA 21 Cup to fans and gamers in the UAE. It’s always exciting to see new gaming talent come through and I’m looking forward to watching them compete in this tournament.”

Simon Price, Head of Market Management at Zurich in the Middle East, said, “We’revery pleased to be partnering with Manchester City on such an exciting initiative, providing us with a novelplatform for spreading awareness of life insurance and the need for protection among new audiences through digital means.”

Registration for the Zurich FIFA 21 Cup opens Thursday, 15 July at 11am GST – https://play.eslgaming.com/fifa/playstation/fifa21-ps4/manchester-city-2021-uae