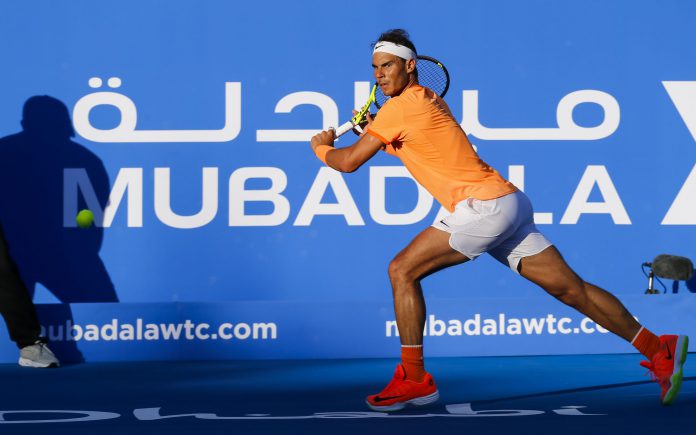 Rafael Nadal will once again set the courts alight when he returns to Abu Dhabi to play in the Mubadala World Tennis Championship (MWTC) taking place from 27th – 29th December 2018.

The tennis supremo joins an impressive line-up this year; Novak Djokovic, Kevin Anderson, Dominic Thiem, Hyeon Chung, Karen Khachanov and Venus Williams – who have already confirmed their appearance with the final player set to be announced shortly. Fans can look forward to a thrilling three-days of tennis action as the world’s top seeds battle it out to be crowned champion.

Will the Mallorca native who has won a record 11 titles at Roland Garros be able to win his fifth trophy in Abu Dhabi? It’s a tall order considering his opposition.

Earlier this year, Nadal tied the record held by Margaret Court for the most titles won at a single Grand Slam event beating Dominic Thiem in the final of the French Open. Nadal has finished as world number one for four years (2008, 2010, 2013 and 2017) and this year won his 33rd ATP Masters 1000 title at Toronto and passed Roger Federer for most ATP Masters 1000 wins at 362.

The 17-time Grand Slam champion, Rafael Nadal described his excitement at returning: “Abu Dhabi is one of my favourite places to play, the climate, atmosphere and enthusiasm from the crowds at the Mubadala World Tennis Championship provides the perfect start to the new season. The tournament brings together players at the top of their game; we all relish playing in these extremely competitive matches.”

John Lickrish, CEO of FLASH Entertainment, said: “We’re putting together an exciting line-up – one that reiterates the growing prominence of the Mubadala World Tennis Championship on the global tennis calendar. Nadal’s return, alongside the newly crowned number one, Novak Djokovic, plus returning champ, Kevin Anderson underlines the importance top players place on the event. Welcoming Venus Williams for her debut in Abu Dhabi adds additional star power; we’re truly excited at the calibre of participants this year.”

The 11th edition of the Championship will feature six top male players and two leading female players and is already shaping up to be bigger and better than ever before. There’s plenty of action off-court as well. The Tennis Village returns once again and has a packed schedule of activities across all three days of the tournament. Tennis fans and their families will enjoy themed experiences including: