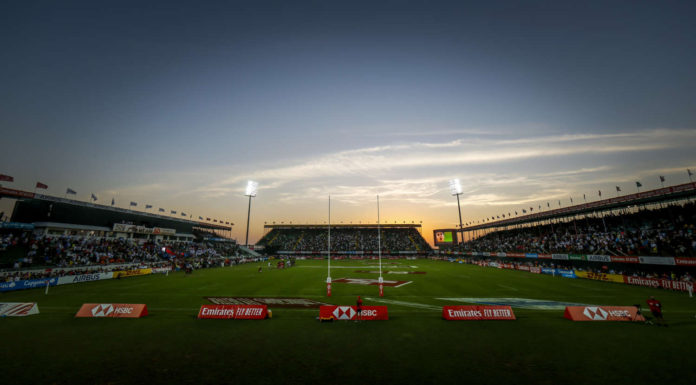 The pools and schedules for the first combined men’s and women’s HSBC World Rugby Sevens Series event of the 2020 season have been announced.

Held on 5-7 December, 2019, the Emirates Airline Dubai Rugby Sevens marks the start of this season’s men’s competition as well as the race for Olympic glory as rugby sevens prepares to make its second appearance on the Olympic Games programme at the Tokyo 2020 Olympic Games.

Dubai will be the second stop on the 2020 women’s competition after the opening round took place in Glendale, Colorado on 5-6 October where hosts USA were victorious.

Hosted at the iconic Sevens Stadium, this year’s tournament celebrates 50 years of the Dubai Sevens and will see all men’s and women’s matches played on the main pitch for the first time in its history.

As the only permanent stop on the women’s series since its inaugural year in 2012, Dubai is now one of eight tournaments for the women’s teams this season – a record number for the women’s competition – and is one of six combined men’s and women’s events alongside Cape Town, Hamilton, Sydney, Hong Kong and Paris.

Day one of the three-day event will see each of the 24 teams play one pool game each, with Spain and Ireland leading the proceedings in the women’s competition.

Reigning Dubai and world series champions, New Zealand will take on invitational side Japan in a Pool C clash with last year’s runners-up, Canada facing Russia in Pool A.

Brazil, also of Pool A and who earned core status onto the HSBC World Rugby Sevens Series this season, will play their opening game against USA who won their second ever gold medal in Glendale earlier this month.

In the men’s competition it will be Samoa and Canada in Pool C who get things underway on day one.

Similarly to their female counterparts, New Zealand will be looking to retain their title in Dubai as they take on Wales in another Pool C encounter.

Reigning world series champions, Fiji will play their first game of the season against Japan, who are welcomed as the men’s invitational side.

After winning the qualifier event in Hong Kong this year, Ireland earned promotion to the HSBC World Rugby Sevens Series and will kick off their campaign as a core team against 2019 series runners-up, USA.

Both men’s and women’s USA teams recorded their highest ever finishes on the world series last season, with the men’s side medaling in all but three of the ten events and the women only missing out on a podium finish in Dubai.

“As the first combined men’s and women’s event of the HSBC World Rugby Sevens Series 20202, and with the Tokyo 2020 Olympic Games on the horizon, Dubai marks the start of a monumental season for our sport,” said World Rugby Chairman, Sir Bill Beaumont.

“Moving all men’s and women’s games to the main pitch at the Sevens Stadium is a huge step forward in our aim for parity across the game which will provide fans with non-stop rugby that is higher in quality than ever before.

“We’d like to congratulate Dubai on their upcoming 50th anniversary and for being such a prominent feature on the world series over the years. There is no doubt that this season’s tournament will go above and beyond to deliver the very best of rugby sevens to those watching in the stadium and at home.”

Tickets for the Dubai Sevens are available via https://dubairugby7s.com/ with pop star Kylie Minogue set to play an evening concert on Friday 6 December to celebrate 50 years of the event.