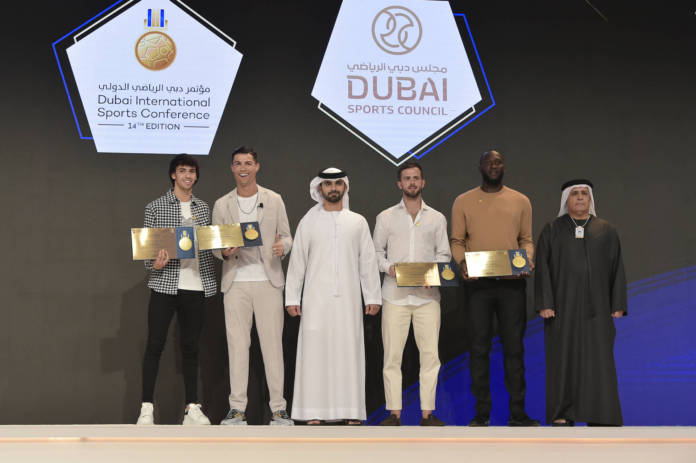 Organised by Dubai Sports Council, the Dubai International Sports Conference has been bringing football’s top stakeholders together every year since 2006 for extensive discussions on ways to develop and enrich the sport at the domestic, regional and international level.

Despite the challenges this year due to the COVID-19 outbreak, Dubai Sports Council, under the guidance of His Highness Sheikh Mansoor Bin Mohammed, has still managed to bring top stars and decision-makers from the world of football in person for the Conference.

Speaking ahead of the Conference, His Highness Sheikh Mansoor Bin Mohammed stressed that Dubai Sports Council was determined to maintain the continuity of this event and organise the annual Conference this year in the presence of football’s top decision makers as well as stars from both within and outside the country, including FIFA President Gianni Infantino and the likes of Juventus superstar Cristiano Ronaldo, Bayern Munich ace Robert Lewandowski and former Spain captain and goalkeeping great Iker Casillas, as well as other guests, and representatives of clubs who have been nominated for Dubai Globe Soccer Awards, which have been held annually since 2010 alongside Dubai International Sports Conference.

His Highness, Chairman of Dubai Sports Council, said: “Thanks to the vision, wisdom and guidance of our wise leadership, the UAE has been able to assure the world that life continues as normal in our country, safe and secure, and that our borders are open to everyone.

“Presently, we are hosting hundreds of thousands of guests who have come to the UAE from different parts of the world to enjoy an unforgettable holiday. They are confident about their health and safety here, and looking forward to returning home with unforgettable memories of this place, and of the many iconic landmarks we have in the country, one of which is the Burj Khalifa, where we are hosting the Dubai International Sports Conference and Dubai Globe Soccer Awards this year.

“Our decision to organise the Conference and Awards this year, in accordance with all the precautionary measures in place and with some of football’s biggest stars and decision-makers present in person, is further evidence of the smooth transition of life to normalcy in every sphere here, and a confirmation that the UAE was and will remain a meeting place for the world, whatever the circumstances, thanks to the vision and guidance of our wise leadership, and the kindness and hospitality of our people, a community that lives and embodies noble values like tolerance and inclusivity, as well as the quality infrastructure and world-leading development in every segment, particularly in the service sector, and tourism and sports.”

His Highness Sheikh Mansoor Bin Mohammed continued: “We are following the path of His Highness Sheikh Mohammed Bin Rashid Al Maktoum, Vice President and Prime Minister of UAE and Ruler of Dubai, who insists we do not wait for the future, but make it, and the organization of this Dubai International Sports Conference contributes towards the creation of a better future for football in the UAE, this region and the wider world.

“The Conference has become a premier annual forum for discussions on football and a brainstorming platform for its development, where new initiatives are launched for the betterment of the game and its future.

“We cherish this role and will continue to play it and achieve more gains for the sport and for the happiness of the football family, including the fans.”

His Excellency Mattar Al Tayer, Vice Chairman of Dubai Sports Council, said: “His Highness Sheikh Mansoor Bin Mohammed Bin Rashid Al Maktoum, Chairman of Dubai Sports Council, directed us to organize the Conference and Awards ceremony this year, with the presence of football players and other guests in person, and provide it with all means of success.

“This is the first event of its kind, given the pandemic situation around the world. The world has seen different international events being organised virtually, but, pursuant to the directives of His Highness the Chairman of the Council, we are organising the Conference and Awards in the heart of Dubai and in the presence of international stars, thanks to the approach and wisdom of our wise leadership and its support, and the great confidence people from around the globe have in this country and the precautionary measures and protocols in place here. These measures have proven successful and have won the admiration of the world.”

His Excellency Mattar Al Tayer continued: “In recent months, the UAE has hosted the biggest stars of the cricketing world, who were here for almost two months for the Indian Premier League which is one of the biggest leagues of its kind in the world. The IPL contingent included more than 1,600 people and the tournament was a huge success.

“Earlier this month, the leading golfers of the European Tour were here for two back-to-back tournaments, including the Tour’s season-ending finale, the DP World Tour Championships, and these two tournaments were the first to be played with spectators in attendance on the European Tour since the COVID-19 outbreak.

“Today, we are back to welcome football’s biggest stars in person, and also fans from around the world who will be glued to their TV sets, watching the live transmission of the Dubai International Sports Conference and Dubai Globe Soccer Awards that will be held at Burj Khalifa, which is a symbol of Emirati creativity as well as the will of the people of this country to lead the world in different spheres of life.”

The Conference will begin at 6:15pm with a speech by FIFA president Gianni Infantino, which will focus on the role football plays in promoting peace across the globe, as well as values like tolerance, inclusivity and equality, and in bringing diverse people together.

After Infantino’s keynote, the three stars – Ronaldo, Casillas and Lewandowski – will take the stage to talk about their respective journeys to the top in their glittering careers. This will be the first time they will assemble on the same stage. Lewandowski and Casillas will be making their first appearance at the Conference, while Ronaldo has been a regular participant.

A short break will follow that session and before the Dubai Globe Soccer Awards begin.