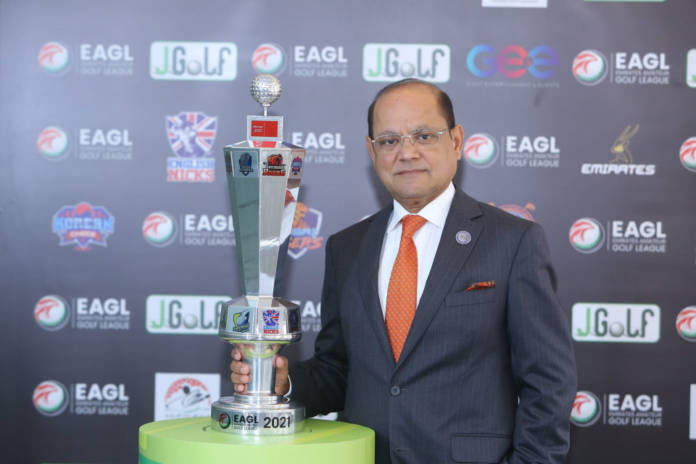 The Dubai golf scene will receive a huge financial jolt later this year with the launch of the Emirates Amateur Golf League (EAGL), the world’s first franchise-based amateur league tournament.

The unique concept of the EAGL promises to deliver more than just a competitive series of sporting events – it will add to the estimated $270m total gross annual expenditure already spent on golf in Dubai.

The tournament is designed to be a solid and profitable business investment, targeting one of the most desirable audiences for any marketeer – high net-worth individuals, corporate leaders and entrepreneurs – and the UAE is the perfect place to host such an event with its cauldron of culture, different nationalities and the plethora of world-class golf facilities.

Launched back in January with a spectacular unveiling ceremony at Dubai Golf Creek & Yacht Club, the inaugural season of the EAGL is scheduled to be held across four iconic UAE golf courses in November and will involve eight team of 24 amateurs, competing on a round-robin basis.

Sanctioned by the Emirates Golf Federation (EGF), the tournament will add several million dollars to that overall expenditure figure, without counting the intangible benefits and opportunity costs for team owners and companies associated with the league.

Sudesh Aggarwal, the brains behind the EAGL and its Chairman, is leaving no stone unturned as he looks to make EAGL a profitable venture for all the stakeholders.

“With the organisers taking care of most staging and organising costs, the initial tangible benefits are working out to be close to one million dollars,” said Aggarwal. “And with an estimated economic impact of golf tourism in Dubai at $38m (Deloitte report) there is no arguing that golf plays a major growth catalyst for the Dubai’s sports and events scenario.

“The EAGL has been conceptualised to capitalise on this growth story and has hypothesised the league to feature nine match days in its first series, with each round offering marketing, hospitality and networking benefits for the investors. And the media benefits are going to be huge as the EAGL will be broadcast live, with 40 hours in the inaugural year.

“I am expecting elite amateur participants from foreign countries, especially places like the United Kingdom and India – and they are going to need boarding and lodging over the period they stay here.

“We have also made sure that the EAGL becomes meaningful for all those involved throughout the year. I want it to be something that forces the teams and the team owners to get better and feel proud about what they have achieved. And, most importantly, I want our team owners and sponsors to get the maximum bang for the buck that they are spending.

“I have no doubt in my mind that the most important stakeholders for the sustainability of EAGL are the team holders and the leading sponsors. Golf is more than a sport, it is a lifestyle statement that brands like to associate with. The sense of luxury associated with the sport, played by HNI and watched by the exclusive high-end audience is a draw by itself.”

League Administrator Priyaa Kumria added: “Golf is a lifestyle sport and a status symbol and the number of courses in Dubai exudes the lifestyle of the local population, especially in UAE where it has been estimated that 400,000 rounds are played by the 6,000 golfers in the country.

“The EAGL will not only encourage the game of golf but will also spur the spending in green fees, food and beverages and entertainment, which will provide the much-needed stimulus to the local events when Dubai emerges from the Covid-19 situation. EAGL matches have been planned midweek to utilise the capacity of golf courses.

“We have set an aim of reaching 670,000 residents of the UAE and 1.5 million golf fans globally. The media partnerships and the channels have been worked out in such a manner that we will easily cross these numbers.”

Dubai is one of the most well-known sporting cities in the world and such a locally focused league will promote the sporting spirit within the UAE. EAGL will serve both the players and the investors, as well as the golf and tourism industry in the UAE, and participants are going to experience an almost professional tournament-like atmosphere, starting from the way the golf courses are set up, to the corporate hospitality lounges and live broadcast.

“As much as the EAGL promises to be a cracker of a competitive experience for the leading amateurs (the handicap limit is 14), it is an equally impressive business opportunity for branding, marketing, client development, networking, PR and entertainment for the country’s leading brands and corporates,” continued Kumria.

“They are guaranteed all this for 11 days at least (nine match days and the opening and closing ceremonies), and throughout the whole year depending on how they want to leverage the property.

“We are hoping that we will be able to start paying the team owners from the sponsorship pool from the first year itself. Also, the valuation of the teams is going to increase every year. However, the biggest motivation for team owners should be the pride of owning a team and the satisfaction of helping and guiding the process of creating champions.”