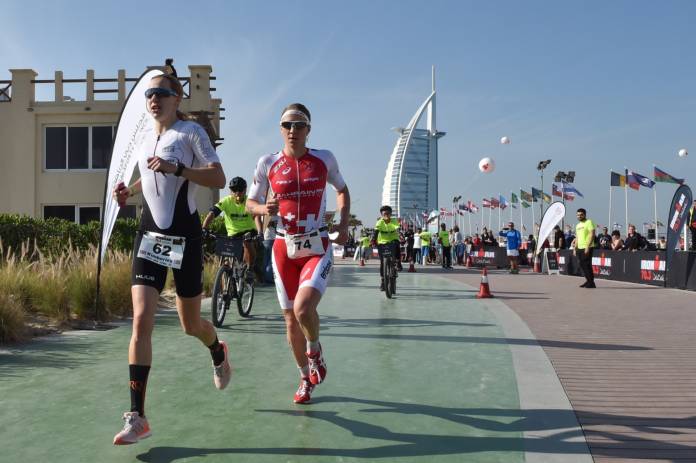 Imogen Simmonds, the 2020 women’s champion, will be back in Dubai this weekend, hoping to defend her IRONMAN 70.3 Dubai crown alongside a stacked field that also includes two-time Dubai women’s champion and Swiss legend Daniela Ryf.

More than 1,400 have registered to take part for this year’s IRONMAN 70.3 Dubai, including nearly 100 elite professionals, and the race will again take place in the famed Jumeirah district, around Burj Al Arab, the stunning seven-star hotel that has hosted celebrities from all over the world.

Supported by Dubai Sports Council and organized under the slogan “Anything is Possible”, IRONMAN 70.3 Dubai is billed as a race that bridges the exotic with the luxurious, and – fast and flat – it also a gateway to brand new personal best times.

Additionally, this year’s IRONMAN 70.3 Dubai will offer 50 qualifying slots for the IRONMAN 70.3 World Championship 2021, which will take place on September 17-18 in St. George, Utah, United States. Plus, there will be an additional 25 qualifying slots exclusively for female athletes from the Women For Tri Initiative.

Winner of the bronze medal at the 2019 IRONMAN 70.3 World Championship, Switzerland’s Simmonds, who has an MSc in Environmental Technology and Business from the Imperial College of London, was a heavy pre-race favourite in Dubai 12 months ago and, true to predictions, she crossed the line ahead of United States’ Danielle Dingman with a significant lead of almost seven minutes, while Pamella Oliveira of Brazil was third.

“IRONMAN 70.3 Dubai you sure did surprise me,” Simmonds wrote on her Facebook page after the win. “Amazing crowds and atmosphere along the whole course, thank you to all those cheering and supporting us crazy athletes!”

Ryf, who has not competed since the Kona Ironman in October 2019, has been training for her return in St. Moritz and now feels ready for Dubai.

“Over the past few months, I have been training a lot and with high intensity,” said Ryf. “But I can’t judge my form just yet. That’s why the opportunity to compete again will not only be very welcome, but useful as well.

“The fact that my next start in Dubai is now imminent, makes me very happy. The course is flat, the race attractive and the organizers are simply fantastic.”

On the men’s side, Belgian Pieter Heemeryck, who was second behind compatriot Bart Aernouts in 2020, will be hoping to go one better this year, while Swiss ace Ruedi Wild, who finished third on his two previous appearances in Dubai in 2017 and 2018, is excited about his prospects as well.

“Finally back to racing,” Wild wrote on his Facebook page last week. “One more week to go till IRONMAN 70.3 Dubai. Great memories from the past and finishing on the podium in both my attempts.

“Skiing always seemed to work well as preparation, so let’s hope it still is. Greatful and appreciate more than ever to have racing opportunities these days.”

The one-loop 1.9km (1.2 mile) swim course is set to the backdrop of the world-famous Burj Al Arab hotel, with athletes starting their swim next to the Jumeirah Beach Hotel and finishing at Jumeirah Publich Beach before they run into transition.

The one-loop 90 km (56 mile) bike course leads athletes through the city before they leave the city limits behind and venture out and into the Araban Dunes. This is considered one of the fastest course in the world if winds don’t come into play.

Patrial road closures will be implemented along the running and cycling routes on Friday, between 6am and 1pm.