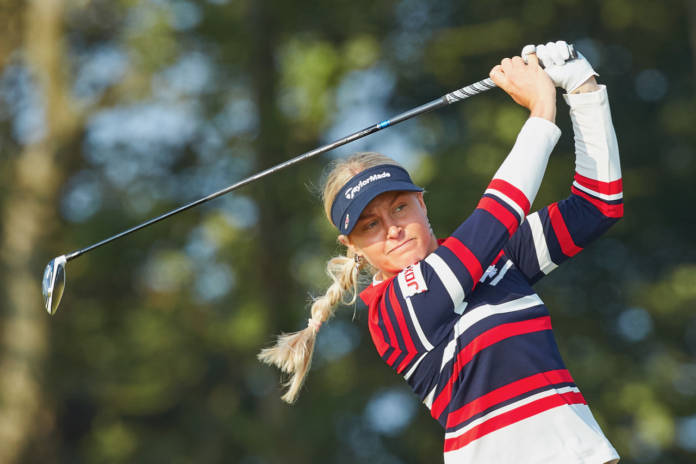 The 24-year old will head to the Middle East seeking her second win in the region, having come out on top in Abu Dhabi’s Fatima Bint Mubarak Open last year.

Hull will have two chances to do so, with the Ladies European Tour event last week announcing that Royal Greens Golf Club – in the coastal resort of King Abdullah Economic City – will be hosting two landmark world-ranking tournaments in just seven days: the $1million prize fund Aramco Saudi Ladies International presented by Public Investment Fund (12th-15th November), and the Saudi Ladies Team International, where professionals and amateurs will compete in teams (17th-19th November).

Both tournaments will be held within a safe bio-secure environment and will see more than 100 of the world’s best golfers descend on the Kingdom for the first ever women’s professional golf event held in Saudi Arabia.

It will also be only the second international professional women-only sports event to take place within the Kingdom, and the all-new team format promised for the Saudi Ladies Team International will be a Ladies European Tour first – a set-up that could make for a 2019 Solheim Cup reunion for Hull and her European counterpart Georgia Hall, who confirmed her place in the history-making event earlier in the year, alongside Golf Saudi ambassadors Amy Boulden and Camilla Lennarth.

Hull said: “To play golf around the world was always my dream growing up and now I have the opportunity to compete in another new country for the women’s game.

“The course looks absolutely stunning so I can’t wait to get out there and compete against some of the world’s top female golfers. It is great to be competing in this inaugural tournament, which is unprecedented, as we play golf in Saudi Arabia for the first time.”

Georgia Hall added: “It’s been a long time coming, with March’s original event postponed due to the pandemic but the prospect of getting out somewhere new and competing in not just one but two tournaments in the space of a week is incredibly exciting for the players – and shows incredible backing for the women’s game.

“The golf course looks fantastic and I’m sure will bring out the best in us, so I’m really looking forward to it.”

2014 LET Player of the Year and Order of Merit winner Hull carried that form into the LPGA Tour’s season-ending CME Group Tour Championship last November, where a second-placed finish earned her almost $500,000.

She has returned to post-lockdown golf in style, winning the Order of Merit in the inaugural Rose Ladies Series in August, as well as competing in major events in both the UK and US.

Best known for winning the 2018 Women’s Open – the first English player to do so in 14 years – Georgia Hall’s career has already seen her top the Ladies European Tour Order of Merit and be named Tour Player of the Year two years in succession.

She finished runner-up to Charley Hull in the maiden Rose Ladies Series in August, before going onto claim her second LPGA Tour victory at the Cambia Portland Classic last month, where she held her nerve to defeat Ashleigh Buhai in a sudden-death playoff.

The events will be Saudi Arabia’s third and fourth professional golf tournaments in less than two years, following the successful running of the Saudi International powered by SoftBank Investment Advisers in 2019 and 2020. Northern Ireland’s Graeme McDowell won this year’s January event.

November’s consecutive Saudi tournaments will offer the LET season’s biggest purse for a regular tour event after only the Scottish Open.

Majed Al Sorour, CEO Golf Saudi and the Saudi Golf Federation, said: “We’re delighted to be able to host exciting new golf tournaments capable of attracting the game’s biggest names – and Charley and Georgia are definitely two of those. With both tournaments being broadcast live across the country, it will be a watershed moment for young Saudis to watch these elite level golfers perform within the Kingdom that we hope will inspire many to come and give golf a try.

“We look forward to welcoming Charley, Georgia and all the other players we’ll have competing in November to what we aim to make a world-class sporting occasion, held within a safe bubble environment and overlooking the turquoise waters off the Red Sea coast.”