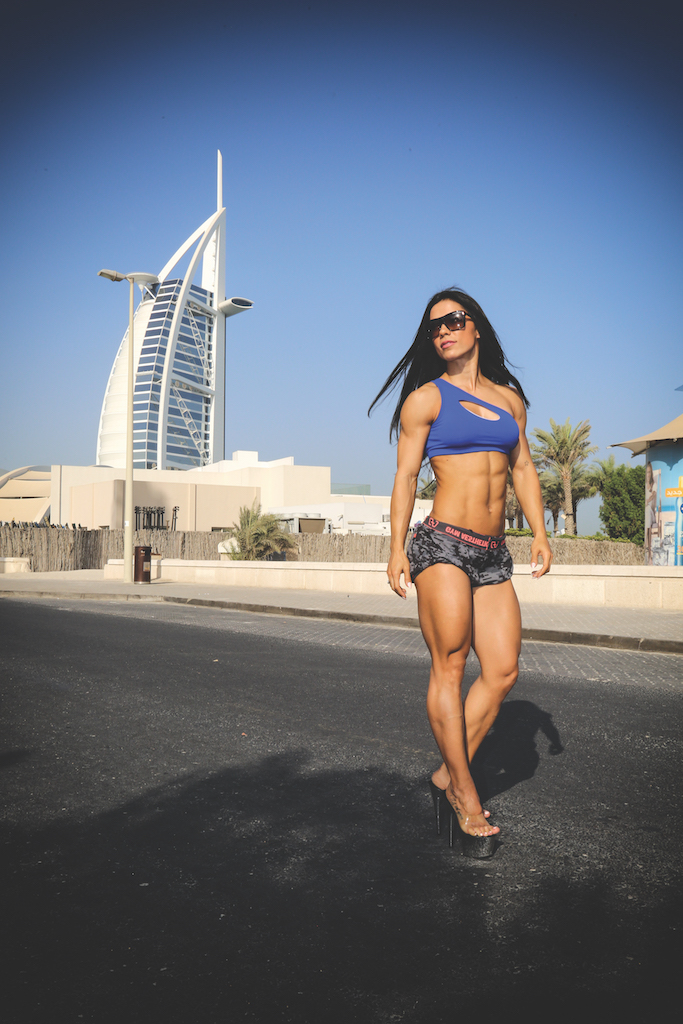 Andreia Brazier is a self-made woman. A true champion who, at the age of 37, has won four WBFF titles. Her amazing physique, eye-popping definition, marble-sculpted abs and breathtaking stage presence have seen her claim numerous titles and accolades as the Dubai-based Brazilian beauty has carved a hugely successful career in the fitness modelling and bodybuilding world.  It would be easy to rest on her laurels and look back with satisfaction at a ‘job well done’ but as she tells SFME’s Ashraf Ahmed, she’s most certainly hungry for more.

“It’s important to never stop challenging yourself,” says Brazier when we meet on Dubai’s Jumeirah Beach in the shadow of the iconic Burj Al Arab hotel. “There’s always more that you can achieve in life and the enjoyable part is setting yourself new goals and then trying your hardest to achieve them.”

The competitive fitness model, whose main motivation is to inspire women worldwide to follow her example by “seeing beyond their perceived limitations”,  believes that her own infatuation with fitness, which began at a young age, helped her escape the tough streets of Porto Alegre in Brazil where she grew up.

“When I was 13 I was buying and collecting various health and beauty magazines and they would have all these great tips,” says Brazier. “I loved to read them and follow the advice they contained.

“I’ve always enjoyed being active. When I was a child I would run and play football with the boys. I would be out the whole day cycling or skateboarding. I just couldn’t stay still! At the age of 14 I went to the gym for the first time and I loved the fact that I could make my body work hard and have that euphoric feeling after workouts. I found the right way to expend all of the energy that I had instead of wasting it on the streets fighting, making problems and giving my parents a headache! So the gym was the best thing for me. It all started from there and I haven’t stopped since.”

Brazier’s road to becoming a WBFF legend was not without its hurdles. She won her first WBFF title in 2012 but, as she was preparing to defend her crown the following year, she was diagnosed with thyroiditis which had a debilitating effect on her fitness. But Brazier believes that with the right mentality you can conquer any obstacle.

“In 2013 I discovered that I had ‘Hashimoto’s Thyroiditis’ and my doctor was shocked at my state,” she says. “He was wondering how I was still preparing for the WBFF with my infected thyroid. Overcoming it was not easy, but I do believe in the power of the mind and mentally I was strong and believed that I could triumph over anything. After the competition was over I started going through treatment and it was horrible! I started feeling very weak, my progress was halted, and my strength dropped considerably. It took me six to seven months to get back to my full fitness but I had to be patient and stay focused on getting back on track.”

The fitness guru will be one of the top athletes competing in this year’s Dubai Muscle Show, which takes place at the Dubai International Marine Club from October 21-22, and she is delighted to be involved in the event.

“I’m super excited and very proud to take part in the Dubai Muscle Show 2016 for the first time,” says Brazier. “I hope the fans can come and appreciate the sport and be a part of it. I think the show could inspire a lot of people in this region and push them to have a better and healthier lifestyle. So thank you Dubai for bringing more shows like this to the country!”

While it may not be possible for everybody to enjoy the same amount of success in the world of fitness that Brazier has, she believes there are steps that each and every one of us can take to make the most of our potential.

“You have to develop an all-round healthy lifestyle and that includes watching what you eat,” she says. “You need to stay away from processed sugar and pastries. Keep your protein levels high and keep the carbs to a moderate level. Go to the gym five times a week – granted you might not nail your workout every time but the main is goal is for you to try to improve every time you go, increase your reps and grow your potential.

“It’s going to take time and effort, but trust me, it will be worth it and you will start feeling much better about yourself. You won’t just feel good physically, you will be mentally sharp as well and you will be more motivated to face and get over other obstacles and challenges in life.”

In her free-time it would be easy to think that Andreia likes to relax and unwind but it’s a concept that is alien to one of the world’s foremost competitive fitness models.

“I just do my best to stay active. I always train, I always take care of myself. My diet becomes slightly less restrictive compared to when I am competing but generally I keep moving and I try my best not to sit or stand for too long.”

WHO INSPIRES ANDREIA?
The Dalai Lama inspires me every day, he is a beacon of kindness and love. Beyoncé is an inspiration as she is an extremely confident character with attitude and swagger. Music is a big part of my life, and I listen to Pink Floyd and Jimi Hendrix whenever I train. In the fitness industry I follow Sylvester Stallone, who is a family-oriented man and a fitness legend. Fitness model Bella Falconi is also someone that I look up to from Brazil. And of course I have to mention my mother and father who have been supporting me since day one!

ABOUT WBFF
The WBFF (World Beauty Fitness and Fashion) is an annual competition that takes place on a global scale and showcases some of the fittest female  models who also posses strong and unique characters. It was founded by fitness legend Paul Dillet and was launched in September 2007.