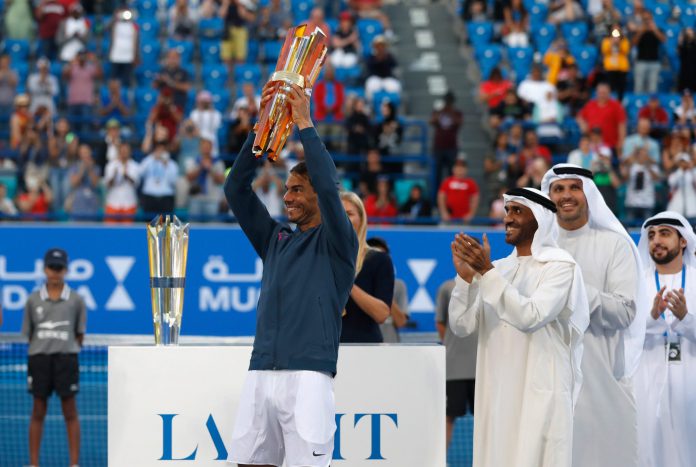 Twelve-time Grand Slam champion Novak Djokovic and three-time Grand Slam winner Stan Wawrinka have been confirmed to join current World No.1, Rafael Nadal as well as Pablo Carreno Busta, Dominic Thiem and Milos Raonic in what is set to be a thrilling 10th edition of the Mubadala World Championship in Abu Dhabi, UAE.

The multiple Grand Slam winners will both be making their first return to the court since Wimbledon after both suffered injuries that has kept them out for the remainder of the season.

And three time Mubadala champion Djokovic is relishing his return to action at the event which is held from December 28-30th at the International Tennis Centre, Zayed Sports City.

“I am extremely excited to return to Abu Dhabi for the fifth time and take part in the 10th Edition of the Championship,” said the Serbian. “It is a huge honour to take part in such a special tournament.

“The line-up is very strong as always and it will be the perfect way to make my comeback and begin the season. Abu Dhabi is an amazing place and this is going to be a great event for all of the fans.”

Warwinka, who will be making his fifth appearance at the Abu Dhabi event said: “It is always a pleasure to kick the season off at the beautiful event in Abu Dhabi, the fans are amazing there and the draw is as strong as always with a lot of great players.

“My recovery is going well and I can’t wait to be back on court. I’m working hard together with my team and looking forward to being back.”

The landmark 10th edition will see the global tennis season kick off with six of the world’s best all competing for the US$250,000 prize.

Game.Set.Match! Will you be at the #MWTC10 this year to watch our six players battle for the title! pic.twitter.com/5cvZMlV6pt

Nadal won last year’s event after defeating David Goffin 6-4, 7-6 (7-5) to claim his fourth win in Abu Dhabi and will be looking to add a fifth after his spectacular form this year saw him add to his Grand Slam wins with titles at Roland Garros and the US Open to take to total to 16.

Raonic will be appearing in his third straight appearance at the Championship and will be hoping to go one better after reaching the final in the 2015-2016 edition but lost out to four-time champ Nadal. The Canadian has reached the quarter-finals at both the Australian Open and Wimbledon this year and will be hoping its third time lucky In Abu Dhabi to capture his first Mubadala World Tennis Championship crown.

Thiem will make his debut appearance at this year’s event and after a stellar year with winning the Rio Open and reaching the Semi-Final at Roland Garros he will be hoping to get his season off to a flying start with a good performance in Abu Dhabi.

Carreno Busta completes the lineup and will also be making his debut appearance. The Spaniard, currently ranked number 11 in the world, has had a good year and reached the US Open semi-final before losing out to Kevin Anderson. He will also be hoping to get his hands on the prestigious trophy at the first time of asking.

Tickets to the Championship are on sale via www.ticketmaster.ae and all Virgin Megastores across the UAE. For more information, visit: www.mubadalawtc.com