Home Events The Big Reveal: Inside the Coca-Cola Arena Dubai 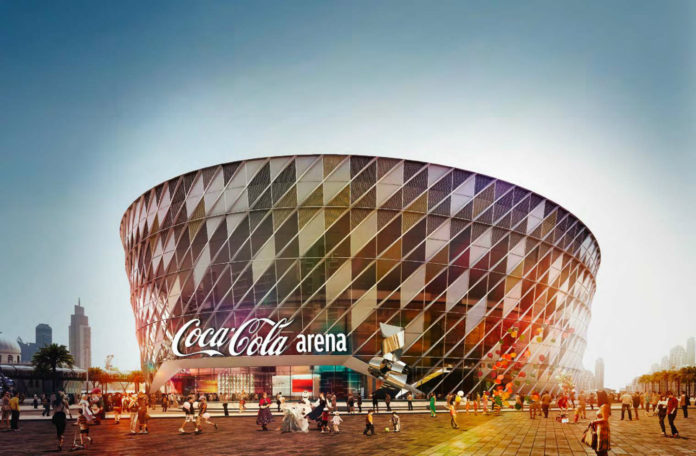 The executive team behind the new Coca-Cola Arena in Dubai today spoke about what it means to the city and region as the media was for the first time shown around the incredible indoor entertainment venue.

The result of a unique collaboration between Dubai-based developer, Meraas, global soft drinks brand, Coca-Cola and international venue management company, AEG Ogden, the Coca-Cola Arena is set to change the face of live events in the Middle East. Located at City Walk, the design-inspired open-air lifestyle neighbourhood by Meraas, the impressive arena is set to open its doors to the public with a live show by comedian Russell Peters on June 6th followed by US superstars, Maroon 5 on June 14th.

The facts, figures and statistics of the Coca-Cola Arena are as impressive as the massive arena itself.

With a capacity of 17,000 and a stage set-up that can be changed to meet the demands of the entertainment, events, corporate and sports industries when required, this multipurpose arena is packed with sophisticated technology.

Inside the Coca-Cola Arena you will find 3,870 sqm of floor space, with a huge variety of stage configurations and a multipurpose drape reduction system that can scale the arena as required depending on the event and audience capacity.

Extending or reducing the floor space through a fully retractable seating system as well as being able to close off the top levels when not in use allows for a swift set up for all-seater shows, standing-only events or in-the-round concerts and performances.

The impressive use of technology also extends to the outside of the Coca-Cola Arena, with the building’s façade wrapped in a sophisticated LED strip light system that can be programmed to change to create a striking display of visual effects.

Created especially for the arena by experts in Germany and flown to the UAE for installation, the lighting system means the Coca-Cola Arena will definitely catch the eye thanks to a blast of glorious technicolour. As the first fully-enclosed and climate-controlled arena of its size in the region, the Coca-Cola Arena is the perfect home for a huge variety of performances across a variety of cultures, sporting occasions or conferences taking place during the hotter months of the year when staging events outside is not an option.

The sophisticated design of the arena’s roof allows it to hold a whopping overall weight load of 190 metric tonnes, which means the Coca-Cola Arena will be able to accommodate awe-inspiring light and visual effect shows from some of the biggest and best productions in the world with ease.

The outstanding volume of facts and figures makes the Coca-Cola Arena the perfect destination for international touring artists, live performers and any act that values incredible acoustics as part of their show. It also means the audience will be treated to an incredible sonic experience when attending the Coca-Cola Arena.

Accessibility is another key area where the design of the Coca-Cola Arena excels, with multiple access and egress points allowing guests to come and go with ease, including 28 wheelchair spaces and companion seats.

Multiple F&B kiosks located around the main concourses will serve a variety of refreshments to guests, while the corporate suites take the VIP experience in the region to a new level. Sustainability is also a key area that the Coca-Cola Arena is concentrating on with a huge effort taken to ensure compostable materials are used to maximize recycling possibilities.

Dubai’s new home of entertainment also boasts eight artist dressing rooms worthy of the world’s top performers and four sports team changing rooms that will be the perfect base for the very best teams visiting from around the globe.