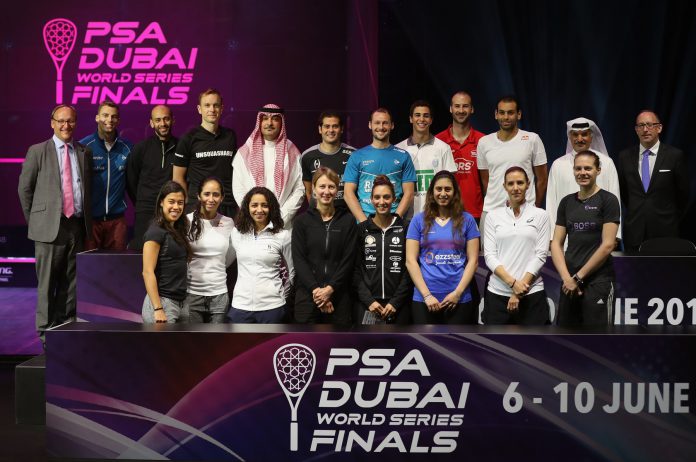 The elite of world squash are back in Dubai this week to battle it out for one of the most prestigious and fiercely contested titles in the sport, the season-ending PSA Dubai World Series Finals, which will take place at the Dubai Opera from 6-10 June.

Only the eight top-ranked players from the PSA Road to Dubai Rankings have earned a place at the prestigious tournament, which offers a US$160,000 prize pool for both men and women. To qualify for Dubai the players had to amass points from PSA World Series tournaments held around the world in the 2016-17 season, and today the players, distinguished guests and media witnessed the unveiling of the spectacular glass court at Dubai Opera during the pre-event Press Conference. Speaking at the Press Conference Ziad Al Turki said, “We are delighted to be back in Dubai for the annual showpiece to crown the season’s top players. The event is one of the most prestigious and high profile on the world tour, and the calibre of the athletes competing is extraordinary.

“We would like to thank H.E. Saeed Hareb and the Dubai Sports Council, their enthusiasm for all sport and for Dubai has made bringing this event here an easy process. Thank you also to Jasper Hope and Dubai Opera, this venue is nothing short of spectacular, and in this magnificent city which plays host to so many incredible events each year, we are honoured to be the first sporting event to take place on this impressive stage. The players have certainly earned the privilege and we are now eager for the competition to commence.”

H.E. Saeed Hareb said “We are delighted to be welcoming the world’s best squash players back to Dubai. As many of you will know, in Dubai we have over 450 major sporting events taking place here each and every year. Dubai is proud of its rich sporting heritage but importantly, we are always preparing for the future and trying to do things differently.

“By hosting this event we get to see some of the very best players in the world compete in Dubai. We also have a responsibility to create a sporting legacy and through staging the PSA Dubai World Series Finals, the profile of squash in the community grows. Developing the game both at the very top, and at the grassroots level, is very important for the Dubai Sports Council.Our target is to promote sports and increase the number of players in our country to give an opportunity for our young talent to learn and be inspired by international stars.

“Dubai is a place where innovation thrives. It is courageous and ambitious – pushing the boundaries of what’s possible and we are seeing this in sport.  The emirate is always looking to develop new ways to use its state of the art facilities and this year’s event at Dubai Opera will be truly spectacular.” Jasper Hope added: “We are pleased and proud to be hosting our first live televised sporting event, this stage has welcomed artists from opera to ballet and this week we are delighted to welcome a new group of artists, world class athletes. They demonstrate many similar qualities, grace, elegance, poise and skill, and we look forward to an amazing week.”

The players were equally impressed with the court and the venue, former world number one Nick Matthew saying: “I’m the oldest player here and this venue is totally new and amazing. We all feel so well looked after here, the event and the hospitality is amazing, I can’t wait to repay you with a great performance.”

With the star-studded line-ups including nine players who have reached number one in the world, as well as both current world champions, the action promises to be thrilling in every session. Four matches will be played in each afternoon session during the group stage from June 6-8. The matches will commence at 3:00pm, while the evening session of play will commence at 21:30pm. The top two players in each group will progress to the semi-finals, which will take place from 21:30pm on Friday 9 June, with the finals being played at 21:30pm on Saturday 10 June. Entry to the afternoon sessions on June 6,7 and 8 is free for families.

The men’s line-up includes current world number one and world champion Karim Abdel Gawad of Egypt, along with four other former world number ones; defending champion Gregory Gaultier of France; England’s Nick Matthew and James Willstrop; and Egypt’s Mohamed Elshorbagy and ElShorbagy will be joined by his younger brother Marwan, countryman Ali Farag with Germany’s Simon Rosner completing the eight. Organisers have announced that families will have free entry to the 3pm session on June 6-8, to book the free seats email [email protected]

Tickets to the evening sessions, semi-finals and finals can be purchased at https://dubaiopera.etixdubai.com/shows/show.aspx?sh=PSAUMB

Sports Quiz | Can you name one Premier League player from each nation who has played in the World Cup?