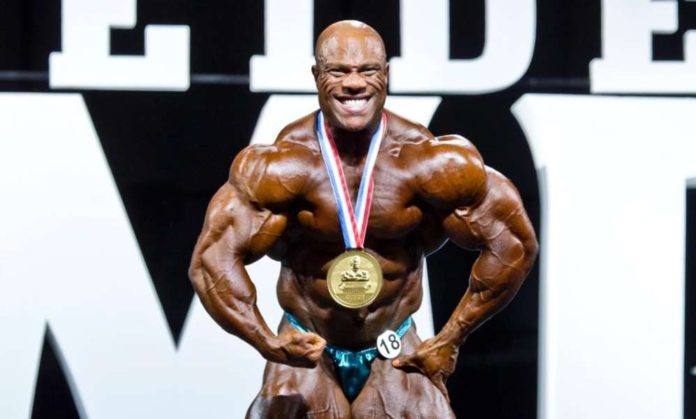 Returning to Dubai for its fourth edition on 5th – 7th December 2019 at Dubai World Trade Centre (DWTC), the Dubai Muscle Show, held in collaboration with Dubai Sports Council, is the Middle East’s largest fitness event, where fitness fanatics meet the stars of the industry, find inspiration, access the world’s best and latest fitness products, get expert advice, training tips, and much, much more.

Headlining this year’s most anticipated event is American IFBB professional bodybuilder and former Mr Olympia Phil Heath: a seven-time Mr. Olympia winner having placed first in the competition every year from 2011 – 2017. His latest win tied him with the legendary, Arnold Schwarzenegger for the third all-time number of wins.

Commenting on his visit, Phil said “I’m so excited to come back out to the Middle East. I’ll be at the Dubai Muscle Show on all 3 days, doing a meet and greet and speaking on stage, so be sure to come out and show your support at this amazing event! I’m really looking forward to seeing all my fans in the Middle East, who have always been so supportive of me!”

Dubai Muscle Show will also be welcoming Kai Greene, American IFBB professional bodybuilder, who’s won 3 Arnold Classic titles in 2009, 2010 and 2016.  Arguably the most inspirational person in bodybuilding and fitness, Kai has gone through an extraordinary rise, starting out as an orphan living between foster homes and institutional facilities, transforming his life through bodybuilding to become one of the top athletes in the world and more recently turning to acting, which has included a role in the Netflix series, Stranger Things. Other international athletes set to appear at the event include Angelica Teixeira who is the 2017 and 2018 Ms. Olympia and 4x Arnold Classic winner from Brazil and Sadik Hadzovic who is an American IFBB professional Physique competitor and won his first ever Arnold Classic in 2015.

New for 2019, Dubai Muscle Show has expanded to three-days with one-day dedicated to fitness trade professionals, who will have complimentary access to the event. The b2b day will consist of a conference, networking functions, an awards ceremony, seminars and an exhibition with fitness companies showcasing the latest technology, equipment, sports nutrition, apparel and other fitness products from across the globe.

The two consumer days will feature some of the world’s most exciting sports competitions, such a strongman, calisthenics, boxing, mixed martial arts, kick-boxing, bodybuilding, weightlifting and many others – including some of the most exciting local, regional and international talent flying in from all over the world.

“We can’t wait to be a part of our 3rd Dubai Muscle Show this December,” comments Bahram Kaffash, Owner of New Rock Sports. “As the most prominent event in the Middle East fitness industry, being a Platinum Sponsor for the event affirms our position as one of the region’s leading players in sports nutrition and fitness. The show has helped to bring global attention to the Middle East region as an international hub for fitness and bodybuilding. As the show continues to grow each year, we have also increased our participation at the event, as a Platinum Sponsor and a 500sqm booth where we plan to give out 100s of free products to visitors across the 3-day event”.