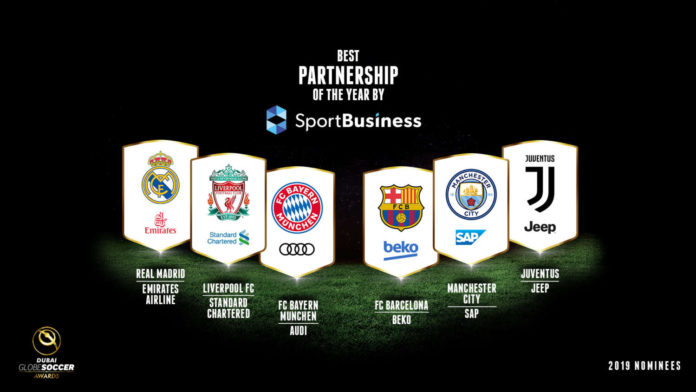 Six of the world’s iconic football clubs and key partners have been shortlisted in a new category to this year’s awards – Dubai Globe Soccer Best Partnership of the Year Award by SportBusiness.

Returning for its 11th year in partnership with Dubai Sports Council, the Dubai Globe Soccer Awards will now include 14 awards that will be presented at Dubai’s Madinat Jumeirah on Sunday 29 December.

One of the longest running partnerships in the shortlist is between German FC Bayern München and domestic car giant Audi, who has been the club’s official automotive partner for over 17 years, since 2002.

Standard Chartered, the leading international banking group, has been the main sponsor of Liverpool F.C. since 2010 and their partnership is set to extend to the end of the 2022-23 season, putting them as firm contender for this year’s new award.

Dubai-based Emirates Airlines has included Real Madrid C.F., the world’s most successful football club, as part of their sponsorship portfolio since 2011. As the official main sponsor of the club, the airline has reaffirmed their partnership twice with a five-year shirt sponsorship signed during the 2017/2018 season.

Italian champions, Juventus F.C, has had Jeep as their main shirt sponsors since 2012. Ultimately owned by the same company as Juventus, Exor N.V., Jeep’s sponsorship now sees the total value of the club’s shirts rising to Euro 100m a season, when taken in conjunction with the deal from their kit makers Adidas.

Turkish international household appliance division of the Arçelik Group, BEKO, has been the main partner of Spanish FC Barcelona and the official sponsor of its training uniform since the 2014/2015 season.

And finally, the partnership between British team Manchester City F.C. and SAP has also been shortlist. As the official Cloud Software Provider and a trusted technology advisor of City Football Group since July 2015, the partnership has seen the development of new applications to analyse and improve performance on the field for players and coaches, scale their business, increase productivity and enhance the fan experience.

“The six most successful partnerships in recent history that we have identified in this year’s new award category, demonstrate how a club and a partner can use the power of sport to enhance their brand, but also offer inspirational moments such as money-can’t-buy experiences for fans and supporters around the world.”

The evening will start with the ‘Food For Champions’ gala dinner, a well-established format by the creators of Dubai Globe Soccer to provide guests with an unforgettable culinary experience of healthy dishes using the highest-quality ingredients and produce. A number of internationally-renowned chefs will be cooking for the guests led by Massimo Bottura, Italian chef and owner of the three-Michelin-star restaurant, Osteria Francescana, in Modena, Italy, which was rated as the world’s best restaurant in the World’s 50 Best Restaurants list in 2016 and 2018.

Heading into its 11th edition, the Dubai Globe Soccer Awards is considered part of the ‘Grand Slam’ of football award ceremonies alongside the Ballon d’Or and The Best FIFA Football Awards.

The day before the awards, on Saturday 28 December, the associated Dubai Sports Council’s 14th edition of the Dubai International Sports Conference will host a wide range of speakers, from club owners to coaches, players and sponsors who will be discussing the future development of football.