Home Events LEMKE AND ARNAUS LEAD THE WAY ON DAY ONE OF RAS AL... 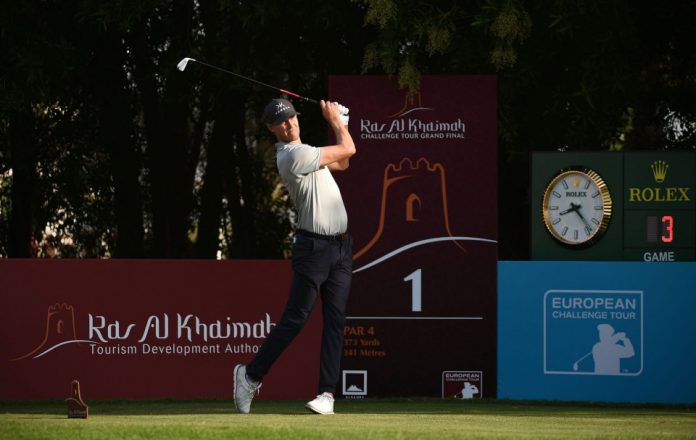 Niklas Lemke and Adria Arnaus got off to a flying start at the Ras Al Khaimah Challenge Tour Grand Final with both men carding rounds of six under par to lead the way at Al Hamra Golf Club on day one of the season-ending tournament.

Swede Lemke, who currently sits in 37th place on the Road to Ras Al Khaimah, came flying out of the blocks in round one as he made the turn in just 31 after picking up his first shot of the day on the par 5 third hole before sensationally making four consecutive birdies from the fifth to eighth. The 34 year old backed up his remarkable front nine with one birdie and eights pars on the back nine to sign for a 66 and put him in the hunt for one of the 15 coveted European Tour cards available to the top 15 on the Road to Ras Al Khaimah Rankings following the tournament.

“It was pretty solid round, a little bit iffy at the beginning but I picked up the pace so that was nice,” said Lemke. “My aim is to get to the top 15 and to do so I have to win the tournament or claim the runner-up spot. It’s good to know exactly what I need to do in order to achieve my goal.

“This is my second Challenge Tour Grand Final appearance and Ras Al Khaimah is completely different when it comes to the practice rounds; it is more chilled and relaxed and it’s been a very nice week so far. We had a pretty solid game plan today and we stuck with it, if the wind does not turn around I think it will be a very similar outcome tomorrow.”

Spaniard Arnaus, who has already confirmed his European Tour playing privileges for next season in his first full year on the Challenge Tour, joined Lemke as the overnight leader after carding five birdies and a stunning eagle on the on the par 5 14th to sign for a 66 in perfect conditions in the northern emirate.

“We had a game plan from the off and we put that into place today,” said Arnaus who is looking for a good result this week which could lead to more tournament entries on next season’s European Tour. “I didn’t start the round in great form and wasn’t hitting it that well but I took advantage of my opportunities as my game grew throughout the round.

“The eagle on the 14th was huge for me and I finished my round well so I’m really hoping to get over the line and get the win this week. It would be really special for me to end the Challenge Tour season with a victory.”

Englishman Tom Murray and French duo Romain Langasque and Victor Perez complete the top three, just one shot back of the leaders after both men posted 67. Murray currently occupies the 15th place on the Road to Ras Al Khaimah while Langasque sits in 25th, ten places off a place on the European Tour next season. Perez lies in second place and will be hoping to continue his fine form as he aims for the Challenge Tour No.1 crown. Meanwhile, the players have been enjoying some of the thrilling adventurous activities that Ras Al Khaimah has to offer with Langasque, Sebastian Soderberg and Oscar Lengden taking in the spectacular sights of the desert whilst enjoying a Dune Jeep Safari thanks to the Ras Al Khaimah Tourism Development Authority. “Sometimes you have to take risks in golf so trying the Dune Jeep Safari was pretty cool,” said Langasque. “We are here for a few days so it’s great to enjoy and see things that are not available in Europe.”