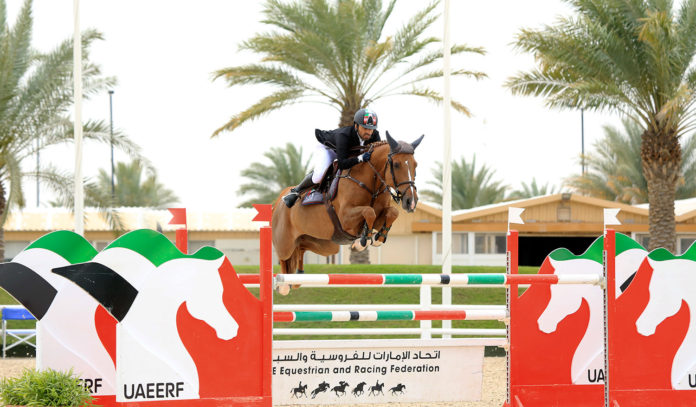 This competition showcased 15 classes over three days at the Emirates Equestrian Centre in Dubai, under the supervision of the UAE Equestrian and Racing Federation (UAEERF) with Longines as the title sponsor, Official Time Keeper and presenting partner of the Emirates Longines Show Jumping league competitions. The championship started last Thursday and concluded on Saturday, before all eyes and horse racing crowds went to the Meydan to watch the Dubai World Cup 2019.

The Emirates Championship celebrates UAE riders from all categories approved by the UAE Equestrian and Racing Federation (UAEERF) who participated in the Emirates Longines Show Jumping League’s national and international competitions during the UAE’s show jumping season. Children, Juniors, Young Riders, as well as  Division 1 & 2 riders, rode in their respective classes with each category riding in three competitions – one on each day of the championship. The results are judged according to the special rules for the championship and the riders’ results are carried over to the championship’s final day of competitions. The championship carried a total purse of AED 400,000, which was distributed amongst winning riders.

H.E. Major General Dr. Ahmed Nasser Al Raisi, President of UAE Equestrian and Racing Federation said: “Following the biggest weekend in the equestrian world – where both the 24th edition of the Dubai World Cup and the 21st Emirates Show Jumping Championship took place – we celebrate not only the UAE as a hub for equestrian sports but also our immense love and respect for the horse.” He continued, “We would like to thank His Highness Sheikh Mohammad Bin Rashid Al Maktoum, Vice President and Prime Minister of the UAE and Ruler of Dubai, for his extraordinary vision and the ability to see the world as a true equestrian where the past and future are linked by the common thread of heritage and values.”

“Just as Sheikh Mohammad’s inspirational new book mentions that his first horse taught him that achievements are never accomplished without work; we, too, have seen this in our national riders who have put tremendous effort and dedication into what they do, every day.  This is what spurs us all on to achieve more for the sport as we head towards the end of an incredible season which has seen more international show jumpers than ever before travel to the UAE to compete in world class competitions delivered by the Federation and venues across the UAE. 50 international riders, 180 riders from the Middle East including 100 riders from the UAE show this sport is growing year on year due to the facilities, events and quality of competition we now offer on UAE soil.”